Inherited platelet disorders are recognized as an important cause of mild to severe bleeding in both children and adults. Patients with platelet disorders may present with mucocutaneous bleeding, gastrointestinal bleeding, menorrhagia, postsurgical, and/or excessive bleeding from traumatic injury. Delta storage pool deficiencies (delta‐SPD) are among the most frequent platelet disorders, characterized by dysfunctional dense platelet granules. Bernard Soulier syndrome (BSS) is an autosomal recessive platelet disorder caused by mutations in various polypeptides in the GpIb/IX/V complex, which is the principal receptor for von Willebrand factor (VWF).

Treatment of platelet disorders is mainly supportive. Normal hemostasis requires VWF and factor VIII (FVIII) to support platelet adhesion and aggregation at sites of vascular injury. von Willebrand factor is a large multimeric glycoprotein present in human plasma as a series of polymers called multimers. Molecular weights for multimers ranges from 500 kDa for the dimer to over 10,000 kDa for the high molecular weight multimers (HMWM) forming the largest known protein present in human plasma. Each multimeric subunit of VWF has binding sites for the receptor GpIb on nonactivated platelets and the receptor GpIIb/IIIa to facilitate platelet adhesion and platelet aggregation, respectively, making the VWF HMWM important for normal platelet function.

Desmopressin (DDAVP), which is known to stimulate the release of VWF and FVIII, is commonly used for treatment of platelet disorders. Potentiation of platelet aggregation at high shear rate may be one mechanism by which DDAVP shortens the prolonged bleeding time of patients with congenital platelet defects. For severe bleeding, platelet transfusion may be required, but patients may develop isoantibodies, rendering this therapy ineffective. For this reason, it may be prudent to reserve platelet transfusion in this patient population for emergent situations, such as trauma. Other patients and/or clinical situations may require recombinant active factor VII (rFVIIa), but this therapy is very costly and not always effective and/or available. Antifibrinolytics may also be used but are not always effective.

In four (4) patients with platelet disorders (delta-SPD [n=3]; BSS [n=1]), common supportive therapies were not effective, tolerable, and/or available. It was postulated that off-label infusions of a cost-effective von Willebrand factor/coagulation factor VIII (VWF/FVIII) complex (Wilate, Octapharma SA) might be of benefit in these refractory patients (Table 1). The mechanism of action of DDAVP treatment efficacy relies on the release of existing, stored, functional VWF. In refractory patients with suboptimal VWF functionality, it was reasoned that infusion of exogenous, functional VWF and FVIII could potentially encourage platelet adhesion and aggregation. All refractory patients studied were treated successfully with the VWF/FVIII complex with positive clinical outcomes.

As mentioned, the adhesive activity of VWF depends on the size of its multimers, and HMWM are the most effective in supporting interaction with collagen and platelet receptors and in facilitating wound healing under conditions of shear stress in the human vascular system. The VWF/FVIII complex utilized in these patients is known to have minimal amounts of the plasma metalloproteinase ADAMTS13. The HMWM of VWF are, under normal conditions, cleaved by ADAMTS13 to smaller, less adhesive multimers. During the manufacturing process, if the ADAMTS13 is not filtered out of the product almost entirely, the VWF in the vial may become highly proteolyzed. Therefore, a reduction or lack of HMWM resulting from inclusion of ADAMTS13 in the manufactured product is believed to reduce product functionality. Multimeric analysis of the VWF/FVIII complex has shown that it exhibits a physiological triplet structure which resembles normal plasma. In addition, the product has a high safety profile and tolerability as protein impurities are eliminated in the manufacturing process.

In summary, the use of a VWF/FVIII complex in four (4) patients with inherited platelet disorders, who were refractory to conventional treatments, provided beneficial, cost-effective clinical outcomes with resolution of bleeding. 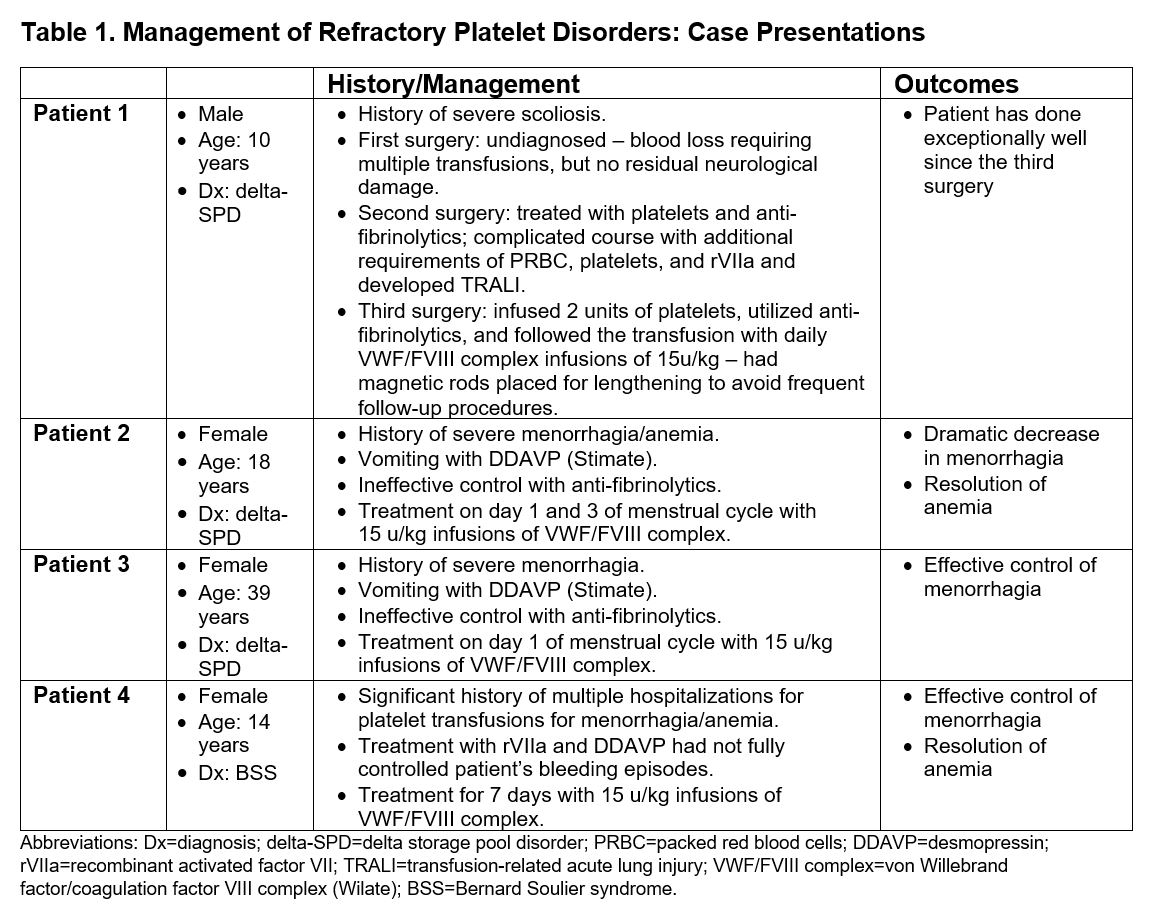 See more of: 311. Disorders of Platelet Number or Function: Poster I
See more of: Oral and Poster Abstracts
<< Previous Abstract | Next Abstract
*signifies non-member of ASH