Multiparameter flow cytometry (MFC) has increasingly been used for measurable residual disease (MRD) assessment in patients with acute myeloid leukemia (AML), while next-generation sequencing (NGS)-based MRD monitoring tool is in clinical development for its application. Clonal hematopoiesis (CH), in which leukemia-associated somatic mutations gene are present in individuals with no apparent hematologic disease, adds a challenge in the detection of MRD. In patients with AML, CH could be potentially pre-leukemic, while persistent mutations in DNMT3A, TET2 or ASXL1 (DTA) in remission marrow are usually removed from the analysis of residual leukemic cells. However, reports suggest that persistent DTA mutations in remission may be correlated with an increased relapse risk.

The present study evaluated long-term outcomes in AML patients who achieved first complete remission (CR1) and compared outcomes according to MFC-based MRD status (was defined as negative if patients achieved 0.1 or less) assessed at the time of CR1.

A total of 435 patients diagnosed with AML and treated with induction chemotherapy between 2015 and 2018 were included. MFC-MRD was assessed in 336 patients in CR1 (77%). NGS was performed using samples obtained at the time of initial diagnosis and used for mutational subgroup classification.

Overall survival (OS) was calculated as the date of CR1 to the date of death and censored on the date of the last follow-up. Relapse-free survival (RFS) was defined as the time from the date of CR1 to the date of relapse or death from any cause. Cumulative incidence of relapse (CIR) and non-relapse mortality (NRM) were calculated considering competing risk. The Kaplan–Meier method using a log-rank test and a multivariate Cox proportional hazard model was used for analyses of time-to-event endpoints. For CIR and NRM, Gray test was performed for the risk factors and the Fine-Gray model was adopted for the multivariate model.

We divided the groups according to the number of induction treatment courses, AML type, cytogenetics risk, and age (<60 vs ≥60), and compared OS, RFS, CIR and NRM between MFC-MRDpos vs MRDneg groups, which showed that MFC-MRD is relevant for risk stratification regardless of above-mentioned clinical variables Tab 1.

Also, we evaluated MFC-MRD status at CR by mutational profile subgroup. Long-term outcomes such as OS, RFS, CIR or NRM were compared by the mutational subgroup. It consistently showed a trend of superior OS, RFS and lower risk of CIR in patients with MFC-MRDneg compared to MFC-MRDpos Tab 1.

Conclusion: These findings suggest that in AML patients with DTAmut, MFC-MRD status at the time of remission assessment can be a tool for MRD assessment when NGS-based MRD assessment is limited. Further study is strongly warranted to reach a clearer conclusion with multiple cohorts. 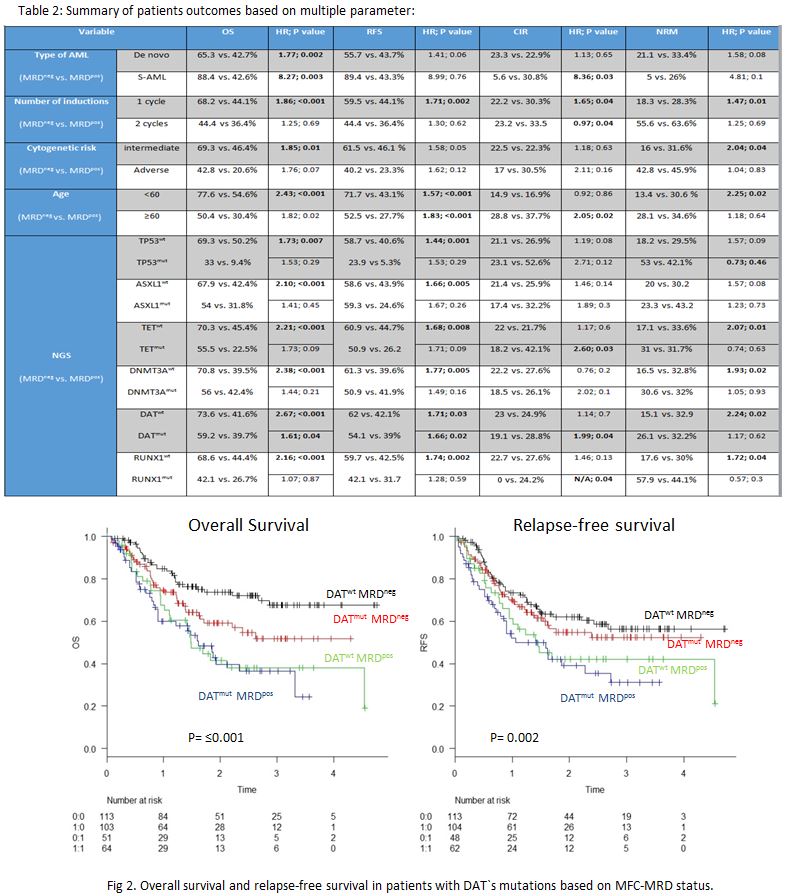