Introduction: While most patients (pts) with cutaneous T-cell lymphoma (CTCL) have an indolent course, survival for stages ≥IIB is usually less than 5 years (Kim YH et al, Arch Dermatol 2003). When an aggressive approach of combination cytotoxic therapies and radiation in CTCL was compared to conservative sequential therapies in newly diagnosed pts, the increase in response rate with combination therapy was offset by toxicities, and no benefit in disease-free or overall survival was seen (Kaye FS et al, NEJM, 1989). Since then several novel agents have been approved in CTCL, including the CD30-directed antibody-drug conjugate brentuximab vedotin (BV) [in relapsed primary cutaneous ALCL and CD30-expressing mycosis fungoides (MF)], and HDAC inhibitors (HDACi). However, response rates of single agents are modest. Tolerable and more efficacious therapies are needed, including rational combinations of active biological agents. Evidence suggests that HDAC inhibition may upregulate CD30 expression (Hasanali ZS et al, Sci Transl Med 2015), supporting the combination of the HDACi romidepsin (R) with Brentuximab vedotin (BV) in pts with CTCL.

Results: At the time of abstract submission, 7 pts have been enrolled (DL0: n=3; DL1: n=3; expansion cohort: n=1). No pt experienced a cycle 1 DLT and DL1 was deemed the MTD. No pts were enrolled in the de-escalation cohorts. Enrollment in the expansion cohort is ongoing. Median age of pts was 64 years (range 51-79); 72% (n=5) were male; median ECOG PS 1 (0-2); median prior lines of systemic therapy were 4 (0-4), including 1 pt with prior HDACi, and 1 pt with prior BV and R exposure. All pts had MF. Stage at enrollment was stage IIB in 5 (72%), IB and IVA2 in 1 each (14% each). No pts have experienced G4 or 5 adverse events (AE). The only G3 AEs observed during treatment were transaminitis and fever (n=1 each), both resolved spontaneously. The most common AEs were nausea (71%), vomiting (43%), gastro-esophageal reflux, constipation, peripheral sensory neuropathy, anorexia, fatigue, and thrombophlebitis (29% each; see Table 1). Response assessment is available for 5 of 7 pts. The overall response rate was 80% (4/5), all of which partial responses, including 1 pt who had received both prior R and BV. The median change in mSWAT was a decrease of 59% from baseline (range -19.5 to -81.8%). After a median follow up of 6.1 months, median estimated progression-free survival was 12 months (PFS probability 0.42; 95%CI 0.1-1.0). Four pts came off treatment: 2 due to progression, 1 due to non-adherence related to COVID-19 concerns, 1 because of recurrent thrombophlebitis; 3 pts remain on treatment.

Conclusion: Preliminary findings from this phase I study exploring the combination of R+BV indicate that R+BV is well tolerated at a dose of R 14mg/m2 and BV 1.2mg/kg given every 2 weeks and appears efficacious in CTCL. Updated results will be presented at the time of the meeting. Enrollment in the expansion cohort and correlative studies, including analysis of changes in CD30 expression after 1 dose of R, and association of response with CD30 expression, are ongoing. 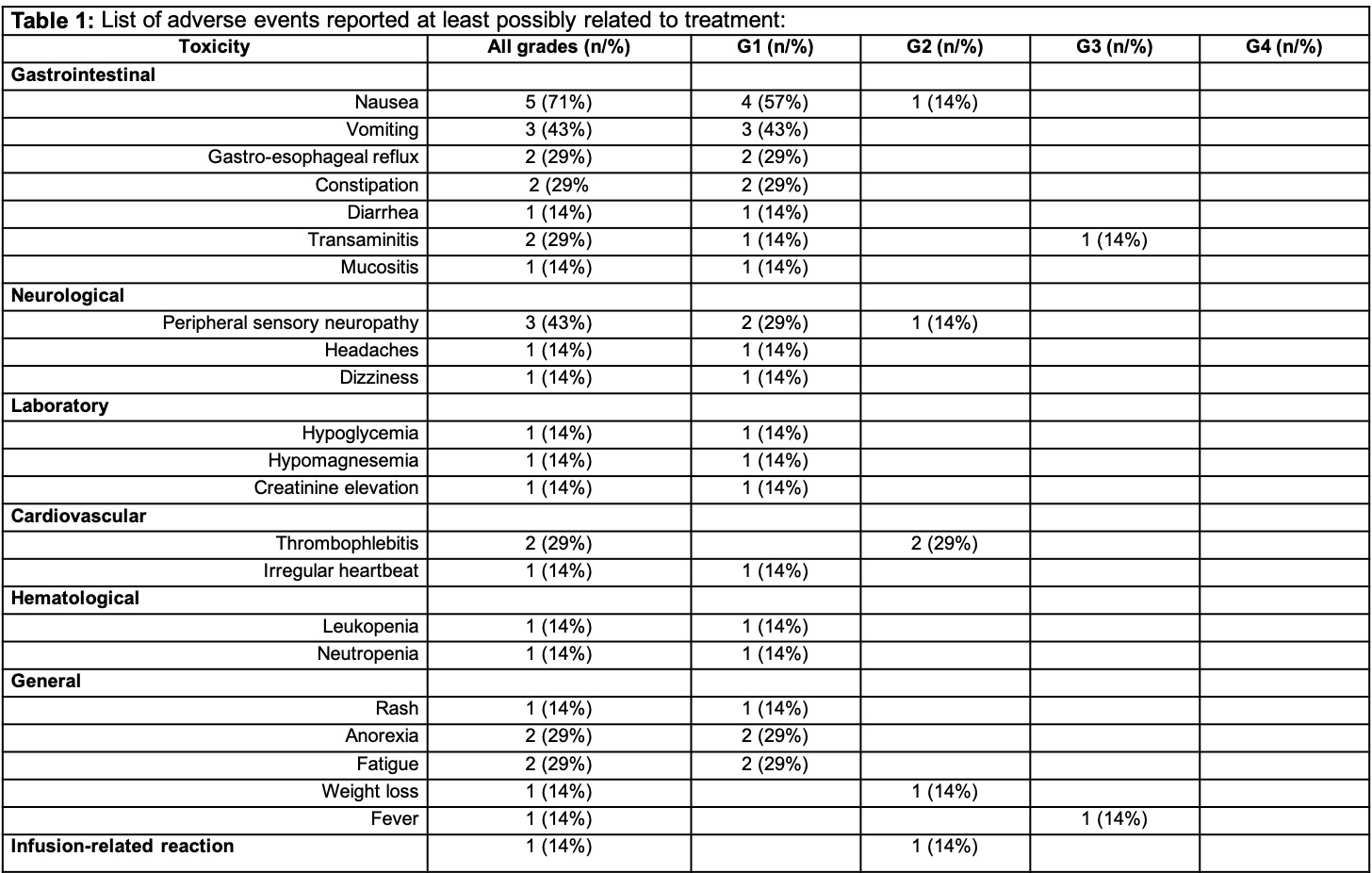