945 SF3B1 Splicing Mutation in the Context of Therapy Related MDS

Therapy related myelodysplastic syndromes (t-MDS) account for 10-20% of all myelodysplastic syndromes (MDS). They are associated with poor outcome namely driven by high occurrence of poor risk cytogenetics and TP53 mutations. Acquired SF3B1 splicing mutation is the sole somatic mutation (SM) associated with favorable outcome in de novo MDS and is described among 80% of patients with ring sideroblasts (RS) subytpe. The prognostic value of SF3B1 SM in the context of t-MDS has not been reported. We aimed to compare the outcomes of patients with SF3B1 mutation (mut) between t-MDS and de novo MDS, and the outcome among t-MDS patients harboring SF3B1 mut to those with SF3B1 wild type t-MDS.

Patients with myelodysplastic syndrome seen at Moffitt Cancer Center between 2013 and 2019 were evaluated and included for analysis. SF3B1 mutational status was assessed via next generation sequencing. We included patients with known SF3B1 status. These patients were further stratified into de novo MDS and those with t-MDS. Further, outcomes of t-MDS patients were evaluated based on SF3B1-mut vs SF3B1-WT. Baseline characteristics were compared by chi square (categorical variables) and t- test (continuous variables). Survival estimates were calculated using the Kaplan-Meier method from date of diagnosis and groups were compared using log-rank test. Multivariate survival analysis performed by means of Cox proportional hazards regression.

In a large cohort of patients with myelodysplastic syndrome, 320 patients were identified with SF3B1 SM who were classified as de novo MDS (n=289) and t-MDS (n=31). Baseline characteristics were similar among both groups with t-MDS patients being slightly older and harboring high risk cytogenetics. Mutational distribution was also similar except for CBL which was more observed in t-MDS compared to de novo (10% vs 1%, p-value =.002). AML, transformation rate was 12.5% vs 12.9% for de novo MDS and t-MDS respectively, p-value .943. Median overall survival (OS) in those with de novo MDS SF3B1-mut vs t-MDS SF3B1-mut was 103 months vs 59 months, p-value .001.

In our study, SF3B1 mutations are more commonly seen in de novo than in therapy related MDS. De novo MDS SF3B1-mut had better outcomes compared to t-MDS SF3B1-mut although rate of AML transformation was similar. In patients with therapy related MDS, those with SF3B1-mut had better outcomes than those with SF3B1-WT. Additionally complex cytogenetics, TP53 mutation, and transformation to AML occurred more with SF3B1-WT than with SF3B1-mut. In the absence of SF3B1 mut, t-MDS with ring sideroblasts has been reported to have higher rate of TP53 mut compared to de novo MDS-RS. To our knowledge, our data is first to suggest that among t-MDS patients, SF3B1-mut may portend a better prognosis. 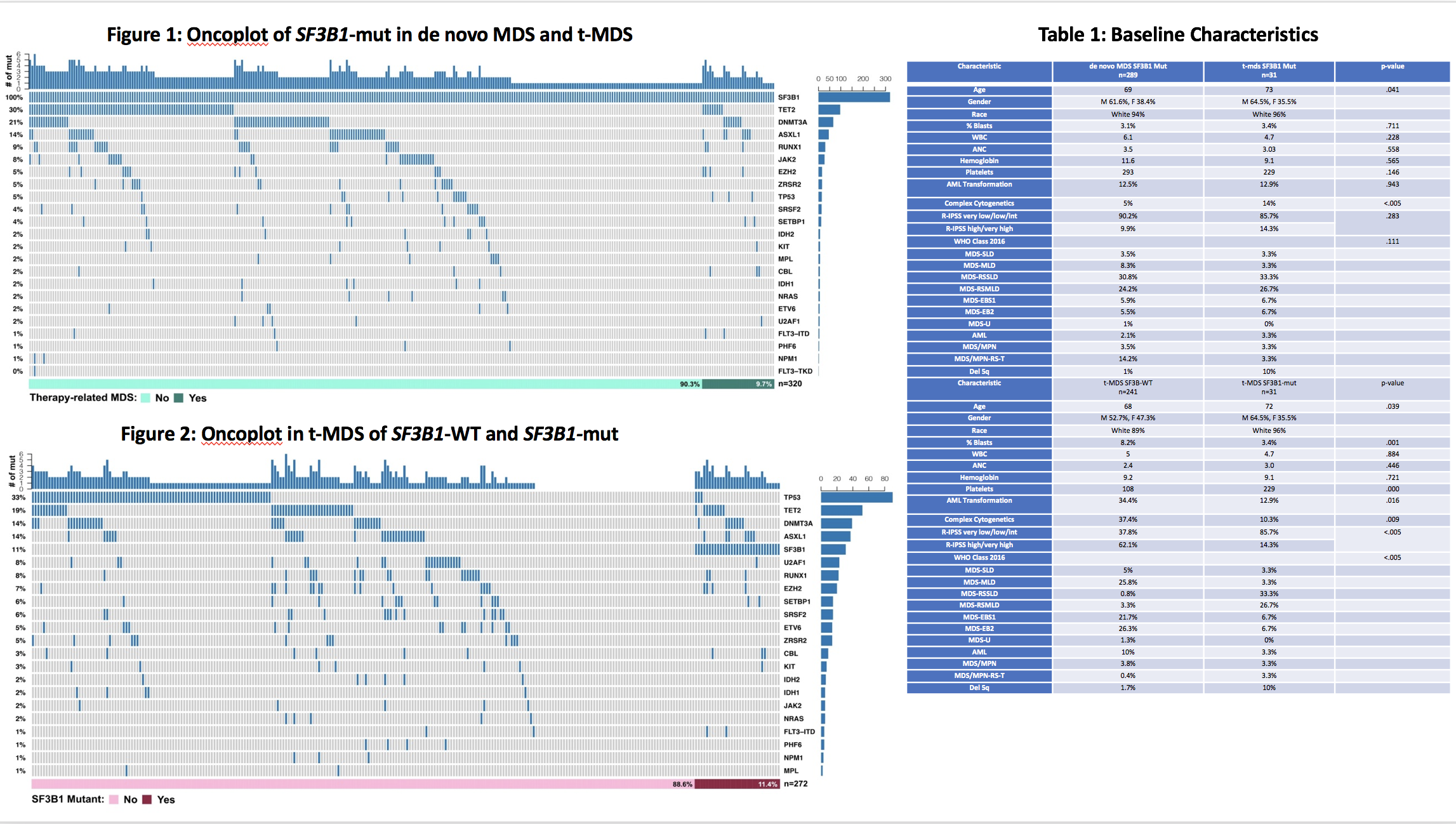