3446 Identifying Myeloid Mutations By NGS in Patients with Unexplained Erythrocytosis

Introduction: Unexplained erythrocytosis is a common reason for consultation in hematology. Identification of JAK2V617F mutation has facilitated the diagnosis of Polycythemia Vera (PV), but a proportion of patients without clear secondary causes for erythrocytosis remain undiagnosed or presumptively diagnosed with an either Exon 12 mutation or JAK2 negative PV. Since 2005, our institution has been performing JAK2V617F testing by PCR. In 2018 we switched to an NGS panel which includes JAK2/exon 12 and 40 other genes implicated in myeloid malignancies. We reviewed all previously diagnosed PV who had NGS myeloid panel performed to determine whether patients with a clinical diagnosis of JAK2 negative PV had other myeloid mutations that might explain their erythrocytosis and alter their management.

Methods: We identified all cases with clinically suspected PV or confirmed JAK2 mutated PV who went on to have had NGS testing performed between January 2018 and February 2019 at London Health Sciences Centre, a tertiary care center servicing a population of approximately 2.5 million in Ontario, Canada. The Oncomine Myeloid NGS panel (Thermo-Fisher, MA, USA) examines DNA sequence variants in 40 genes (17 full genes and 23 hotspot genes) along with an RNA-based panel of 29 fusion driver genes and their over 600 fusion partners. Diagnosis was based on the WHO 2016 Classification of Tumours of Haematopoietic and Lymphoid Tissues. The clinical impact was assessed from retrospective review of electronic medical record to determine whether there was a diagnostic or management impact.

Conclusions: In the unexplained erythrocytosis JAK2V617F PCR negative group, JAK2 exon 12 mutation was identified in 3.4% in keeping with known incidence of this mutation. Some previously positive PCR JAK2V617F mutation were not identified by NGS panel (16%) which may reflect changes in clone size either with time or therapy or inherent differences in assay sensitivity (2.5% mutational alleles for NGS versus 0.1% for PCR). Lack of identifiable myeloid mutation and clonal hematopoiesis by NGS testing influenced clinical management. Specifically, mutation negative patients were more likely assigned to non-MPN group and called secondary erythrocytosis which resulted in reducing interventions. Non-JAK2 mutations occurred in more than 1/3 of previously identified JAK2 positive PCR tested PV. The clinical impact of most these mutations is uncertain and requires longer follow up. 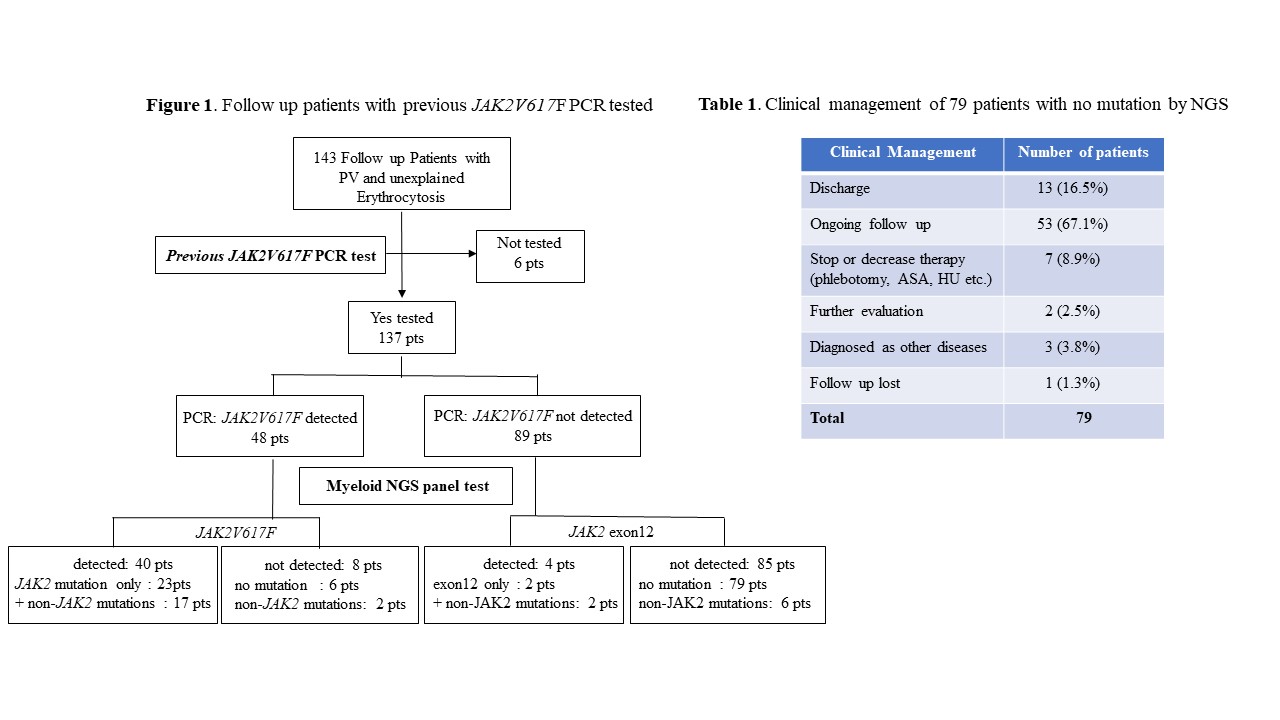