1190 A Phase I-II Trial of DA-EPOCH-R Plus Ixazomib As Frontline Therapy for Patients with MYC-Aberrant Lymphoid Malignancies: The Daciphor Regimen

The human c-MYC oncogene is rearranged or overexpressed in approximately 12% or 37% of aggressive B-cell non-Hodgkin lymphomas (NHL), respectively. Relapses within 18-24 months are observed in more than 50% of these patients when treated with standard chemoimmunotherapy. Ixazomib is an orally bioavailable proteasome inhibitor that is FDA approved for multiple myeloma and has been shown to down-regulate MYC in lymphoma models (Ravi et al., 2016). It has also demonstrated preclinical activity in aggressive NHL, including double-hit (DH) lymphoma.

Herein, we report results of a multicenter phase I/II study evaluating the safety and efficacy of induction chemotherapy with DA-EPOCH-R in combination with ixazomib followed by ixazomib maintenance in aggressive MYC-aberrant NHL.

Adult patients with aggressive MYC-aberrant NHL defined as MYC-overexpression (> 40%) by IHC, MYC-amplification (>4 copies) by FISH, and/or MYC-rearrangement by FISH were eligible. Ixazomib was administered in conjunction with 6 cycles of DA-EPOCH-R. Intrathecal methotrexate prophylaxis was administered using institutional guidelines. Ixazomib was continued as maintenance for up to one year in responders. During phase I, an accelerated titration design was employed to determine the MTD of ixazomib (doses of 2.3 mg, 3 mg or 4 mg) in combination with DA-EPOCH-R. During induction, ixazomib was administered twice per cycle (1 cycle = 21 day), day 1 and day 8 or 15 based on blood counts. For maintenance, ixazomib was dosed at 4 mg weekly. Based on phase I results, 3mg of ixazomib was chosen as the RP2D for phase II. The primary objective was to determine MTD in phase I and to evaluate the efficacy of ixazomib given with DA-EPOCH-R as measured by 12-month PFS rate in phase II. Secondary objectives were to evaluate safety and assess ORR post-induction and OS in all phase I/II patients.

Thirty-eight patients were enrolled between 10/2015 and 9/2019 and 36 were evaluable for response. Median age was 63 years (range 31-77) and 27 were male (71%), 86% had advanced stage, 46% had DH or triple hit lymphoma (28% and 18%, respectively), and 89% had an IPI of 2 or higher (Table 1). Twenty-nine (76.3%) patients completed all 6 cycles of induction therapy with DA-EPOCH-R and 25 (65.8%) patients were able to undergo dose escalation of DA-EPOCH-R. Two (5.3%) patients had ixazomib dose reductions during induction and 10 (26.3%) patients had discontinuation of ixazomib during induction. Reasons for early discontinuation during induction included peripheral neuropathy, concomitant comorbidities, progressive disease, and death.

The ORR after induction was 89% with an associated CR rate was 61%. One patient received autologous transplant as consolidation and did not pursue maintenance as a result. Estimated 24-months PFS and OS were 66.9% (95% CI, 50.7% to 88.4%) and 78.7% (95% CI, 65.10% to 95.52%), respectively. Of the 21 patients who received maintenance, sixteen had a CR while 5 had a PR. In those who achieved a PR and went on to receive maintenance, 1 patient converted to CR and 1 maintained a PR with ongoing response at last follow-up. Two patients progressed and 1 has not yet been re-evaluated for response.

At a median follow up of 17.6 months (range: 14-19 months), 7 patients had PD. Six patients died, 3 from PD, 1 from respiratory failure, 1 from sepsis, and 1 from natural causes considered unrelated to study drug.

In this older population with aggressive MYC-aberrant NHL, DA-EPOCH-R induction with adjunctive ixazomib followed by maintenance ixazomib appears to be safe and effective. It is notable that 31% of patients had ixazomib dose reduction or discontinuation during induction and only 55% of patients initiated maintenance, which may have compromised the efficacy of this approach. Exploratory analysis of clinical and histological variables is ongoing and will be presented at the meeting. Improving frontline outcomes for this subset of patients remains a critical unmet need. 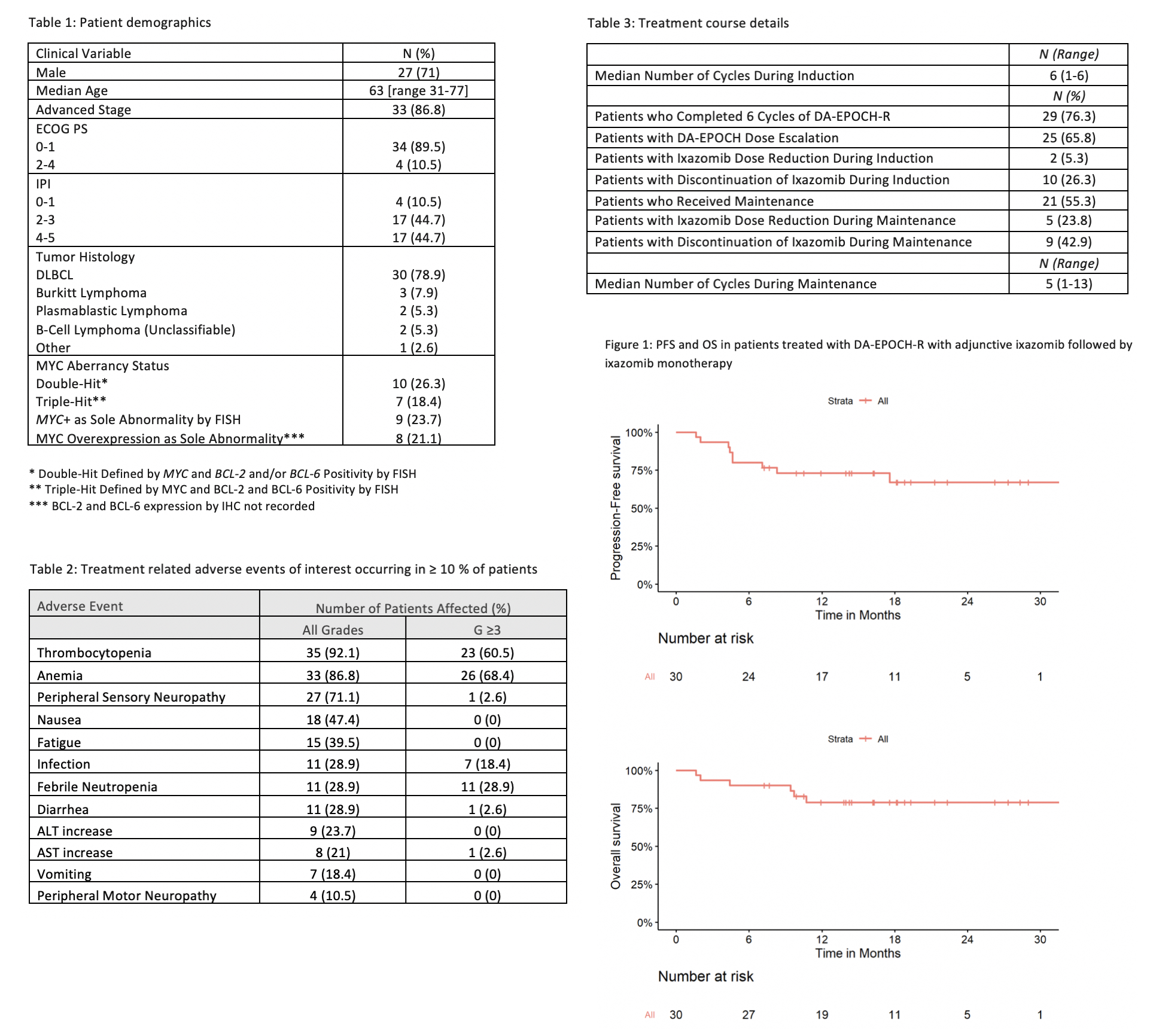 OffLabel Disclosure: Ixazomib is an orally bioavailable proteasome inhibitor that is FDA approved for multiple myeloma. It has also demonstrated preclinical activity in aggressive NHL, including double-hit (DH) lymphoma.