METHODS: Patients (Pts) received I-M 560 mg daily for up to 4 years after complete/partial response (CR/PR) to frontline chemo-immunotherapy (+/- autoSCT). The 3-year PFS rate was the primary endpoint. Secondary endpoints were PR to CR conversions, median OS and toxicity. After identifying a trackable clone using archived tissue obtained at diagnosis, minimal residual disease (MRD) was measured using NGS (detection resolution of 1 cell per million; clonoSEQ®; Adaptive Biotechnologies) on peripheral blood at 4 time-points: baseline (after induction but prior to starting I-M) and then at 1, 6 and 18-24 mo(s) after initiation of I-M.

At the time of data cut-off, MRD was assessed in 21 of 36 pts at varying time points (Figure 1) with remaining samples not yet collected/analyzed. After induction but prior to I-M, 16 pts were confirmed MRD (-), 4 were MRD indeterminate and 1 was MRD (+). Four pts MRD (-) prior to I-M became MRD (+) with follow-up, 2 induced with hyperCVAD, 1 with BR and 1 with R-CHOP + autoSCT prior to I-M; 2 of these pts reverted back to MRD (-) status with ongoing I-M. Of the 2 pts with persistent MRD (+) disease, 1 had clinical progression and the other maintains radiographic CR. Post induction, all MRD indeterminate pts were MRD (-) when checked after 1 month on I-M. The pt who was MRD (+) after front-line treatment (Nordic regimen + autoSCT) remains MRD (+) after 30 cycles of I-M without clinical relapse. MRD correlations with PFS and OS have not yet been performed.

CONCLUSION: I-M 560 mg daily is feasible in pts with MCL after response to frontline chemo-immunotherapy. Grade ≥ 3 rates of atrial fibrillation/flutter are consistent with ibrutinib’s known safety profile. NGS-based assessments demonstrate that most pts are MRD negative after intensive induction. Longer follow-up and correlation of MRD with PFS and OS are needed to determine the clinical relevance of I-M and MRD status. 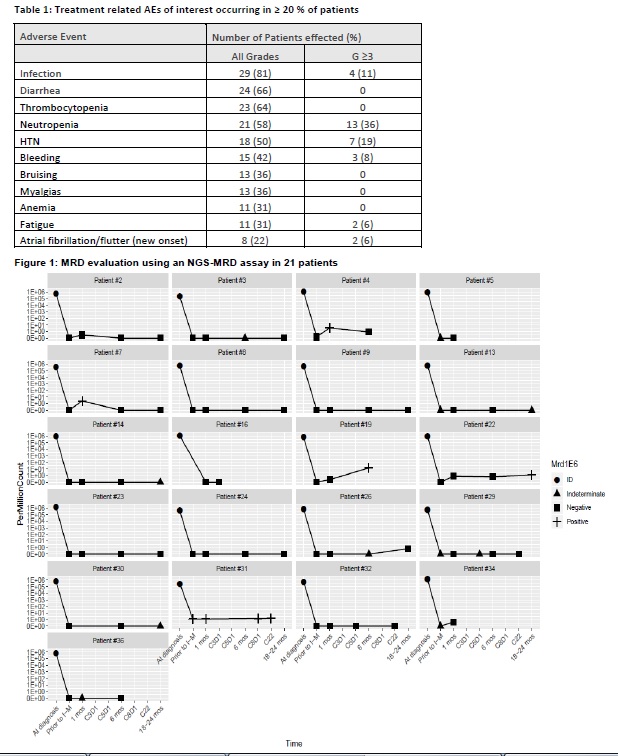