Introduction: B cell lymphoma/leukemias (BCL) are a diverse set of malignancies. The genomic landscape of many BCL subtypes have been described. However, genomic ancestry has rarely been investigated. We applied SNP-based genomic ancestry prediction to comprehensive genomic profiling (CGP) data to identify significant enrichment of ancestry by subtype. We also explored enrichment of genomic alterations (GAs) by ancestry.

Results: We compared the ancestry composition of each BCL subtype to the overall ancestry composition of the rest of the sample set (Fig 1A). Pts of AFR ancestry were overrepresented in plasmablastic lymphoma (PBL) (OR=7.2, P<0.05); EAS pts were overrepresented in Burkitt lymphoma (BL) (OR=4.99, P<0.05); and AMR pts were overrepresented in acute B-cell lymphoblastic leukemia/lymphoma (B-ALL) (OR=3.2, P<0.001). AMR SNPs have been associated with increased risk of B-ALL and worse prognosis (PMID: 21297632). We also investigated GAs enriched in specific ancestries. B-ALL AMR pts were enriched for GAs in IL7R, IGH, CRLF2, JAK2, and IKZF1 compared to other ancestries in B-ALL (Fig 1B). These genes were associated with the high-risk Philadelphia chromosome–like ALL (Ph-like ALL) molecular subtype of B-ALL (PMID: 30181314). We found 33% of all B-ALL contained GAs consistent with Ph-like ALL (PMID: 30181314). While we noted enrichment of AMR pts in the overall B-ALL cohort, we identified additional enrichment in the Ph-like B-ALL cohort with 47% of Ph-like B-ALL pts being of AMR ancestry (OR=1.85, p<0.001). AMR pts accounted for almost half the Ph-ALL pts in this cohort; however, even in B-ALL pts without Ph-like genomic features, 32% were of AMR ancestry suggesting this enrichment is not simply due to increased CGP testing in Ph-ALL.

In diffuse large B cell lymphoma (DLBCL), we found pts to be primarily of EUR ancestry, however we identified ancestry bias in GAs (Fig 1C). CD79B alterations were enriched in DLBCL pts of SAS ancestry, although not significant after FDR correction, consistent with previous reports of increased Activate B-Cell (ABC) cell of origin (COO) subtype and BTK signaling in pts from South East Asia (PMID: 31189540). CDKN2A, also frequently altered in ABC COO subtype, trended towards enrichment in EAS ancestry. CUX1, a tumor suppressor involved in PI3K signaling, was strongly enriched in AFR pts in both DLBCL and B-ALL. One CUX1 insertion variant (G870_G871insSGG) was particularly common in AFR pts with BCL (7/9 AFR, 2/9 AMR), which has been reported previously in Myelodysplastic syndromes (PMID: 24030381). CUX1 alterations have been reported to be associated with increased PI3K signaling suggesting in part PI3K inhibitor trials should proactively include pts of AFR ancestry (PMID: 24316979). Finally, EZH2 alterations were slightly enriched in AMR DLBCL pts, but showed no ancestry bias in follicular lymphoma (FL) pts, of interest given the recent EZH2 inhibitor approval in FL.

Conclusions: This study described multiple important genomic differences in BCL using genomic ancestry rather than patient-reported descriptive variables. Enrichment of AMR ancestry was observed in B-ALL overall, and in Ph-like B-ALL. In addition, enrichment of CUX1 alterations was observed in both DLBCL and B-ALL of AFR ancestry. While precision medicine holds the promise to advance cancer care, many acknowledge the potential to unintentionally deepen existing health disparities (PMID: 31112478). Further analysis of ancestry informative markers in BCL, including enrichment of ancestry markers in specific cancer subtypes and ancestry-associated enrichment of specific GAs, may lead to insights into cancer biology and contribute to ongoing cancer health disparities research. 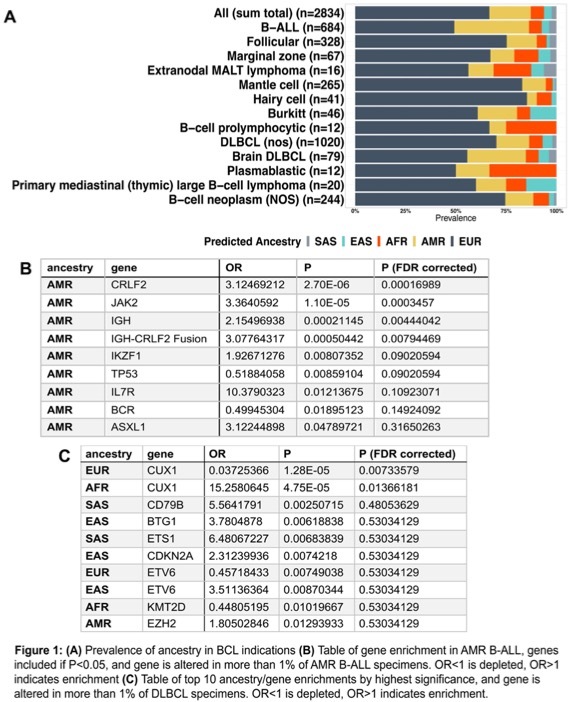