Methods: Pts were randomized to VenR (Ven 400 mg daily for 2 years [yrs] plus monthly R for the first 6 months [mo]) or BR (6 mo). The primary endpoint was investigator-assessed progression-free survival (PFS). Pts in either arm with disease progression were followed for overall survival (OS) and disease response to any subsequent anti-CLL therapeutic regimens. Pts who initiated new anti-CLL therapy, but who had not had a response assessment reported by the principal investigator, were considered unevaluable.

After a median treatment-free interval of 23.7 (range 3.3–43.8) mo, 32 VenR pts were re-treated with Ven-based regimens; 21 were enrolled in the re-treatment arm of the MURANO sub-study and 11 were treated outside of the sub-study. The BOR to re-treatment with Ven or Ven-containing therapies was 72.2% of evaluable pts (Table 1). Among these pts, initial response to VenR at the main study end of combination treatment response visit was 100% (6 complete response [CR]/CR with incomplete hematologic recovery; 12 partial response), with 77.8% (14/18) achieving undetectable minimal residual disease and 15/18 completing the initial 2 yrs of Ven therapy without progression. Median treatment duration in evaluable pts re-treated with Ven-based regimens was 11.4 (range 0.7–37.6) mo with 50% of pts continuing on therapy.

Conclusions: Five-yr data from MURANO demonstrated sustained TTNT benefit with VenR versus BR. Despite >80% of relapsed BR pts receiving salvage therapy with a novel agent, OS rates remain superior with VenR therapy. Relapsed VenR pts demonstrated high ORR to either subsequent BTKi therapy or re-exposure to Ven-based regimens. These data show early use of fixed-duration VenR in R/R CLL is an effective approach and does not compromise subsequent therapy response or OS. 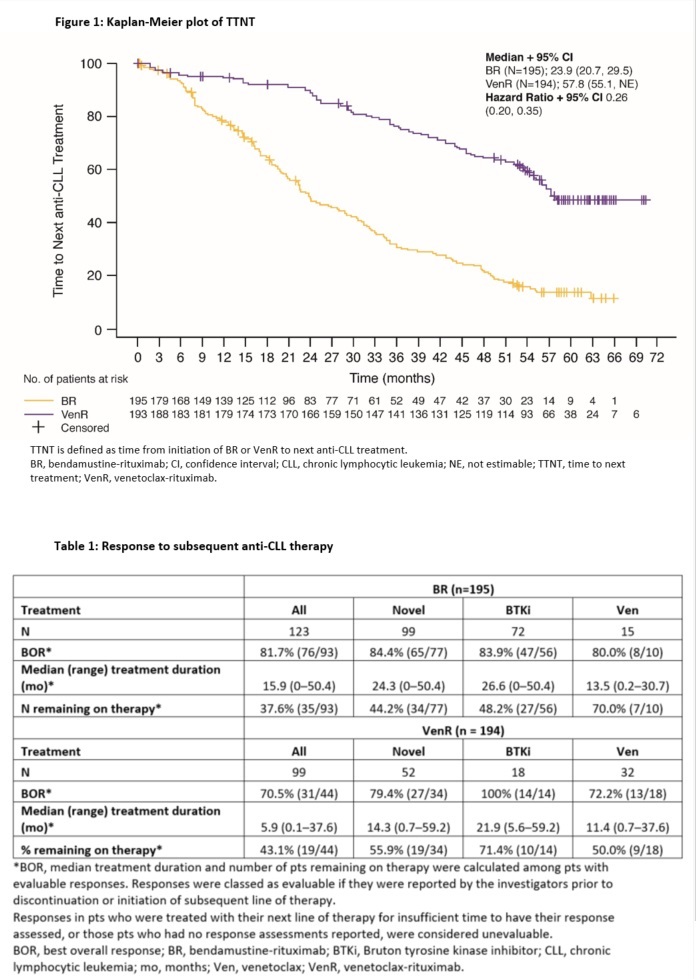