MRD in ALL is defined as the detection of leukemic cells in bone marrow below the microscopic threshold in complete remission (CR). Patients (pts) with molecular failure (MolFail) or molecular relapse (MolRel) after induction/consolidation therapy are at a high risk for hematologic relapse. Targeted therapies should prevent hematologic relapse, reduce MRD load and provide a bridging strategy to allogeneic stem cell transplantation (SCT) and thereby improve overall outcome of these pts. In pts without (wo) SCT option reduction of MRD load is an essential goal as well. Blinatumomab is an antibody construct that redirects CD3+ T cells to CD19+ target cells, resulting in a serial lysis of CD19+ B cells. In a study in pts with MRD ≥10-3, 78% achieved complete MRD response (Gökbuget N et al., Blood 2018). The MolAct1 trial was initiated by the GMALL study group to evaluate the efficacy and tolerability of Blinatumomab in MRD+ ALL including those with MRD below 10-3 and pts with MRD after SCT.

Adults (≥18 yrs) with CD19+, Ph-negative BCP ALL in CR after ≥ 3 chemotherapies with MRD ≥10-4 were eligible (NCT03109093). Recruitment of pts with MRD ≥10-3 was stopped after marketing authorization for this entity. After an amendment, which became effective after 44 recruited pts, pts with MRD below 10-4 or non-quantifiable (nq) MRD were eligible.

Blinatumomab 28 μg/day was given as 4-wk infusion, followed by a 2-wk break (1 cycle). Responders could receive up to 4 cycles or undergo HSCT after ≥ 1 cycle. MRD after 1 cycle was the primary endpoint. MRD was centrally assessed by allele-specific quantitative real-time PCR of clonal rearrangements of immunoglobulin or T-cell receptor genes. For definition of MRD at inclusion and at response assessment see table 1.

64 pts with a median age of 44 (18-83) yrs were included from 19 centers and 60 were evaluable. 63 pts were treated in first CR (5 after SCT). Overall, 67% achieved MolCR, 10% had MolFail, 23% MolNE. MolNE identifies an intermediate response with different options clarified table 1. 81% of the pts included with MRD ≥10-4 had a molecular response i.e. MolCR or MRD < 10-4. No significant differences in terms of MRD response were observed according to MRD level at inclusion or other patient characteristics (table 1).

60 pts have completed study treatment (40 HSCT, 8 relapses during treatment, 4 completed 4 cycles wo SCT, 2 stopped earlier due to toxicities – 1 with subsequent SCT, 1 due to GvHD, 1 due to physicians' decision and 4 pts returned to standard treatment after 2 cycles).

Overall, the results from previous trials were confirmed. In addition, it was demonstrated that pts with MRD between 10-4 and 10-3 had a similar response and a trend towards better outcome compared to pts with higher MRD levels >10-2. So far only 7 pts with MRD below 10-4 were included; more data are needed to evaluate the impact of Blinatumomab in this population; GMALL does currently not recommend SCT for these pts unless there is an indication due to other risk factors. Interestingly, a significant proportion of pts (23%) had an incomplete MRD response and the outcome results indicate that these pts together with those with MolFail may have an inferior survival compared to those with MolCR. The results underline that the clear definition of MRD categories and consideration of level and sensitivity is essential for interpretation, which is possible due to well defined standards for the PCR method used here. 68% of the pts received SCT in CR after Blinatumomab with a so far limited mortality (13%). Further follow-up is certainly required. The GMALL will continue to recruit patients with MRD levels below 10-3 in order to improve their chances for long-term survival

This study was supported by Amgen Inc. 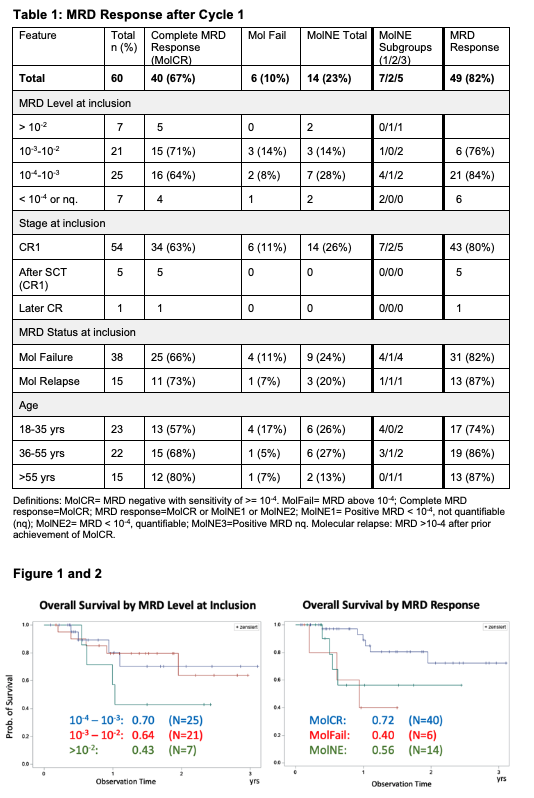