Background – We investigated the efficacy and safety of using a combination of ibrutinib plus rituximab (IR) followed by short course (4 cycles) of R-HCVAD/MTX-ara-C as consolidation in previously untreated young (age ≤ 65 years) patients (pts) with mantle cell lymphoma (MCL). Using a chemo-free induction may reduce the toxicities, complications and the risk of second cancers which were observed with intensive chemoimmunotherapy regimen in MCL pts.

Methods – We enrolled 131 previously untreated pts in this single institution, single arm, phase II clinical trial - NCT02427620. Pts received IR induction (part-A), until they achieved complete remission (CR) for up to a maximum of 12 cycles, followed by a maximum of 4 cycles of R-HCVAD/R-MTX-ara-C (part-B) as consolidation. None of the pts received stem cell transplant or maintenance therapy. The primary objective was to assess overall response rate (ORR), [defined as either a partial response (PR) or a complete response (CR)] after part A. Adverse events were coded as per CTCAE version 4. Among evaluable samples, minimal residual disease (MRD) by flow cytometry at best response, clonal evolution and MRD using circulating tumor DNA (ctDNA), whole exome (WES) and bulk RNA sequencing from baseline tissue samples was performed.

Results – Among the 131 pts, the median age was 56 yrs (range – 35-65). High Ki-67 (≥30%) in 58/117 (49.5%) pts, 10 pts (8%) had high risk simplified MIPI score, 15 pts (11%) had aggressive MCL (blastoid/pleomorphic) and 114 pts (87%) had initial bone marrow involvement. Seventeen pts (13%) had had complex karyotype and 83% had positive SOX-11 expression. Baseline PET scan was available in 101 pts and 97 pts had PET positive disease. Median number of cycles on IR in part A was 7 (1-12). At week 16 on part A, the ORR was 95% (15% CR and 80% PR) and 5% pts had stable disease. Overall best response (ORR) on part A of therapy was 100% (88% CR and 12% PR) and at the time of last follow up after completion of part A and part B, ORR was 100% (98% CR). Median time to CR was 5 months (range 1-16). Pts with CR within 6 months are “early” CR (n=66) and those with CR ≥ 6 months were “late” CR (n=49) while pts who never had CR were grouped as no CR (n=13). With a median follow up of 37 months, the median PFS and OS were not reached (3 year 82% and 95% respectively). Twenty two pts (17%) relapsed after treatment, including 6 who transformed to aggressive MCL. PFS among pts with high and low Ki-67% was 58 months vs not reached (P=0.03) while no difference was observed in OS. PFS was significantly shorter in pts with aggressive histology (p=0.003) but not the OS. Overall 6 pts died (2 with progression, 2 due to disease transformation, one on study due to multiple complications including splenic hematoma, cardio-pulmonary arrest and progression and the last one expired outside and came off study due to encephalitis). Forty two pts came off study for various reasons [16 disease progression (including 4 transformation), 20 pt choice, 3 intolerance, two second cancer and one lost to follow up]. Grade 3-4 toxicities on part A were 4% myelosuppression and 8% each with fatigue, myalgia and rashes and 4% mucositis. None had grade 3-4 atrial fibrillation or bleeding. WES in 76 pts revealed deletions of BANK1, CCND1, TP53, UBR5, ATM, RB1, CDKN2A and BCL2 in late CR (n=14) (≥ 6 months) and no CR (n=12) pt groups vs early CR (< 6 months; n=30). KMT2C, NCOR2 SMARCA4 and NSD2 mutations were significantly different in late CR vs early CR groups. Furthermore, 68 pts had bulk RNA sequencing and a differential gene expression pattern was identified separating early vs late vs no CR groups. Immune response pathways were overexpressed in early CR pts while oncogenic signaling pathways were clustered in late CR and no CR groups. 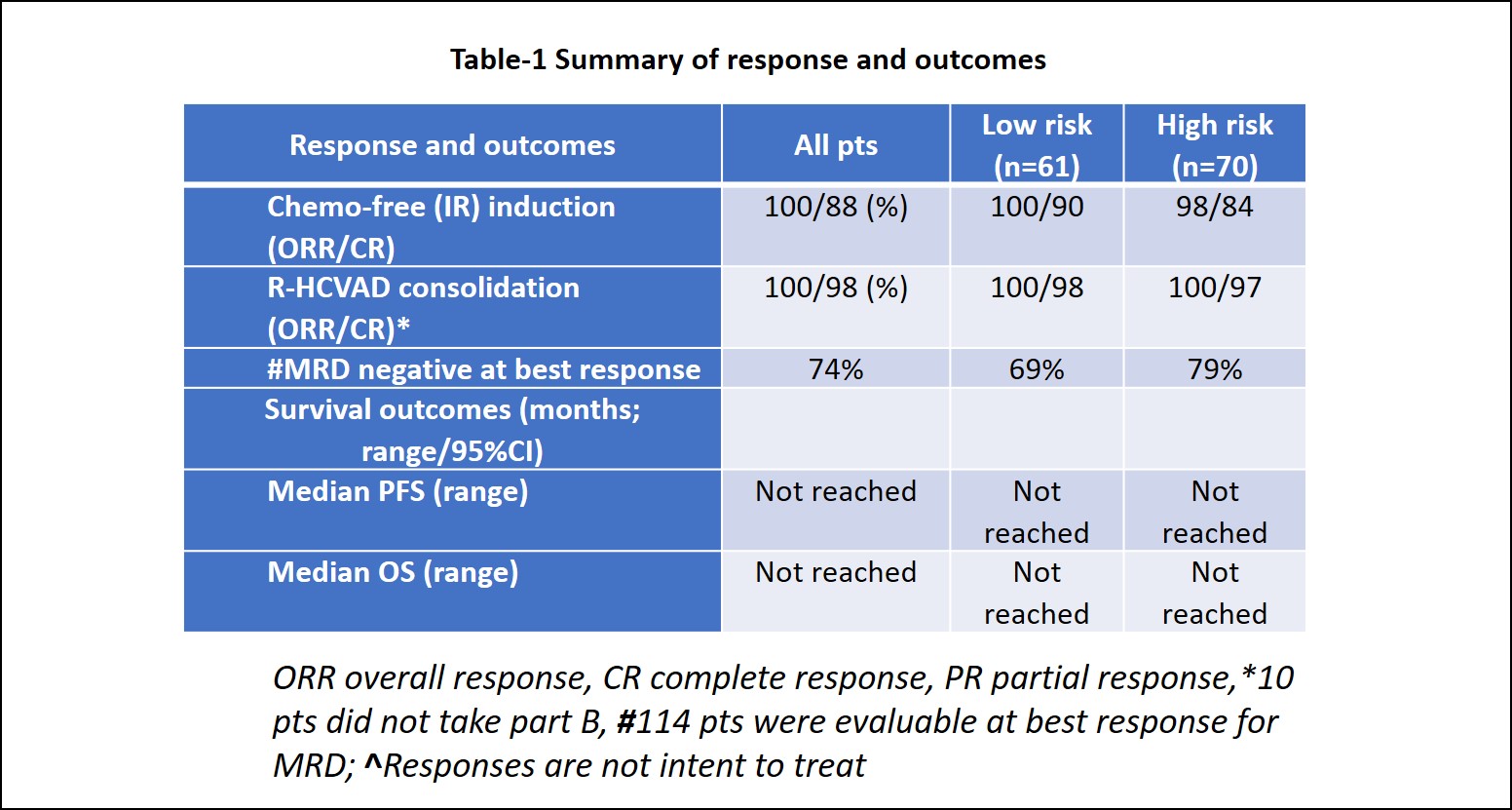