2552 Relative Survival of Patients with Nodal Marginal Zone Lymphoma in the United States: A Population-Based Analysis

Introduction: Nodal marginal zone lymphoma (NMZL) is an indolent B-cell non-Hodgkin lymphoma (iNHL) that usually presents in elderly patients with painless lymphadenopathy. Patients often have advanced disease at diagnosis, and bone marrow involvement is common. Treatment of NZML involves radiation therapy for localized disease, and systemic therapy for advanced disease including single-agent rituximab, rituximab and chemotherapy (such as bendamustine, chlorambucil), or novel agents (especially in the relapsed setting such as ibrutinib, lenalidomide and PI3K inhibitors). The objective of this study was to determine whether advances in treatment and supportive care over the past decade have translated to improved relative survival at the population level in patients with NMZL in the United States.

Method: We used the population-based Surveillance, Epidemiology, and End Results (SEER)-18 database. We included adult patients with NMZL diagnosed between 2000-2017 who were 18-84 years old at the time of diagnosis. We excluded patients with a history of malignancy prior to NMZL, those with missing survival times and those with central nervous system involvement. Patients were divided into two cohorts based on period of diagnosis (era-1: 2000-2008, and era-2: 2009-2017). Relative survival (RS) was estimated using the Pohar-Perme method, and the difference between RS distributions was tested using a log-rank-type test. Relative survival was modeled using Poisson regression where the effect of follow-up time was included as restricted cubic spline with 5 knots. All tests of differences were performed at a two-sided alpha of 0.05.

Conclusion: There has been a significant improvement in RS in the most recent era for patients with NMZL in the United States after adjusting for differences in age, sex, race/ethnicity, income, and stage at diagnosis. This improvement at the population level is likely reflective of the improvement in supportive care and advances in the NMZL treatment including identification of better tolerable chemotherapy regimens and novel agents. 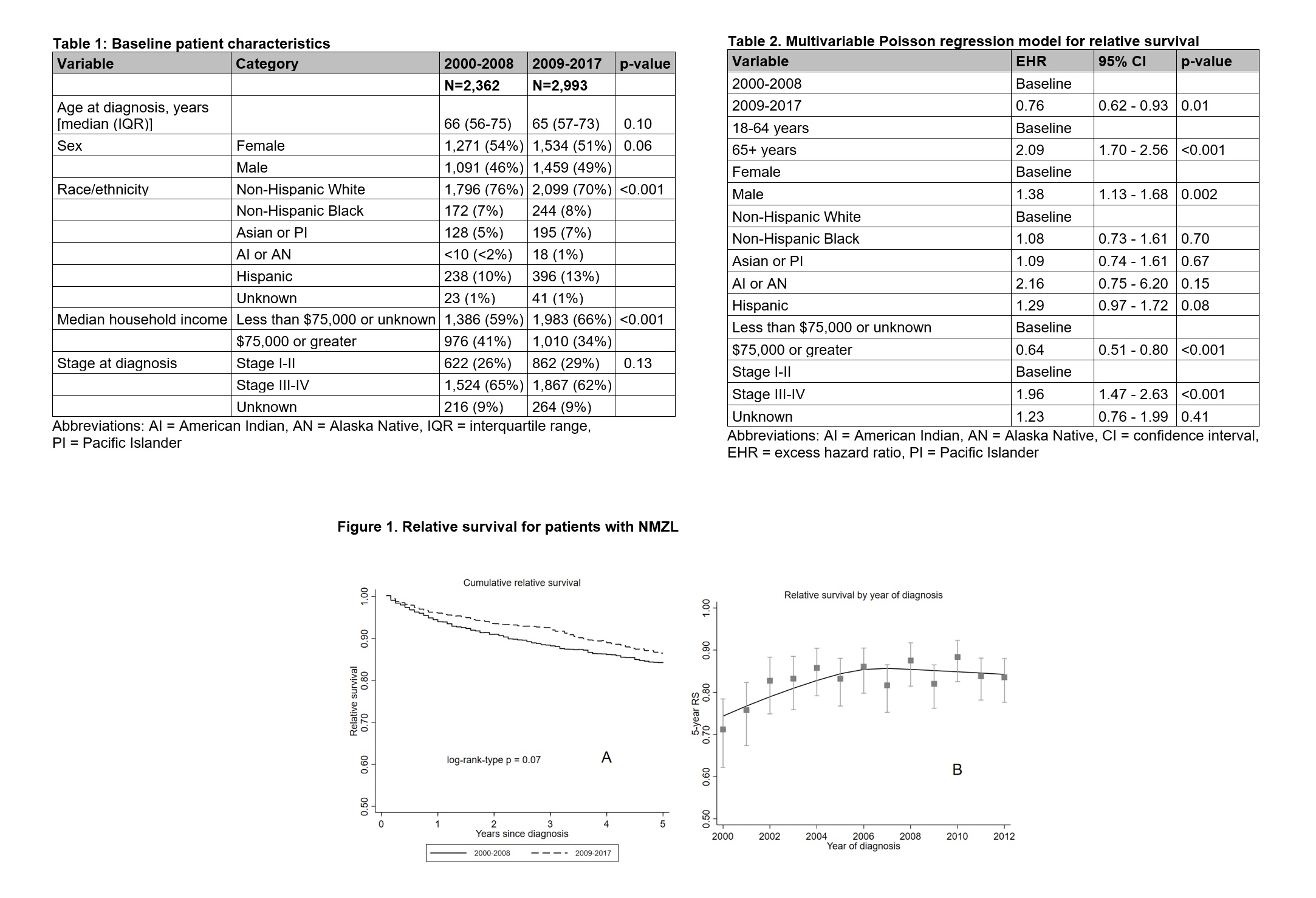