Introduction: Given similar overall survival (OS) seen in patients receiving delayed vs. early autologous stem cell transplant (ASCT) in multiple myeloma (MM), some patients are electing to proceed with transplant at relapse instead of with upfront therapy. However, there is limited data in the era of novel therapies on expected disease control and outcomes in MM when ASCT is done for relapsed disease. The objective of this single-center retrospective study was to evaluate the outcomes of ASCT in patients with relapsed MM.

Results: Of the 168 patients, the majority underwent transplant in first relapse (69%, n=116) and the majority had not received a prior transplant (80%, n=135). Baseline and treatment characteristics of the cohort are shown in Table 1. High-risk cytogenetics were seen in 27% and ISS stage III disease in 15%. Median PFS-PRIOR was 20 months (range 2-228). The induction regimen used before ASCT included a doublet in 32%, a triplet in 56%, a quadruplet in 1.5% and a chemotherapy-based regimen in 9% of patients. Stem cell collection was done after relapse in 72% of the cohort. Conditioning regimen included melphalan 200 mg/m2 in 90% patients, including melphalan 200 mg/m2+BCNU in 55%. Median time to neutrophil and platelet engraftment was 11 and 16 days, respectively. Response after ASCT was very good partial response or better in 82% (n=124) of patients. Maintenance therapy was given in 35% (n=56) of patients after ASCT, with 73% patients receiving IMiD maintenance and a median duration of maintenance of 7 months (range 1-41).

Survival: Median follow-up of this cohort was 61 months. Median PFS from start of treatment was 28 months. Median OS from start of treatment was 69 months and from diagnosis was 118 months. Two patients (1%) died within the first 3 months of complications related to transplant. As expected, patients who received ASCT at first relapse had a longer PFS of 33 months compared to 22 months when the transplant was done at second or later relapse, p=0.003 (Fig. 1A). OS from treatment start in patients undergoing transplant at first relapse was 82 months and those undergoing ASCT at second or later relapse was 45 months, p=0.004 (Fig. 1B). However, there was no difference in OS from diagnosis in these two groups (118 vs 134 months, p=0.97). Subgroup analysis was done in patients undergoing transplant at first relapse. Patients who had a PFS-PRIOR of ≥36 months had OS of 91 months compared to 62 months for those who experienced a shorter PFS-PRIOR, p=0.03. PFS in the subgroup of patients without prior ASCT undergoing transplant in first relapse (N=96) was 30 months.

Conclusions: This study provides comprehensive data on expected outcomes and prognostic factors amongst patients with MM undergoing ASCT at relapse, with median PFS and OS being 28 and 69 months in a cohort where only a third of patients received maintenance therapy. Disease response at transplant, PFS-PRIOR and KPS were prognostic for survival. These data can serve as a guide when counseling patients undergoing ASCT for relapsed MM and also serve as benchmark in designing clinical trials of transplant and comparative novel therapies for relapsed MM. 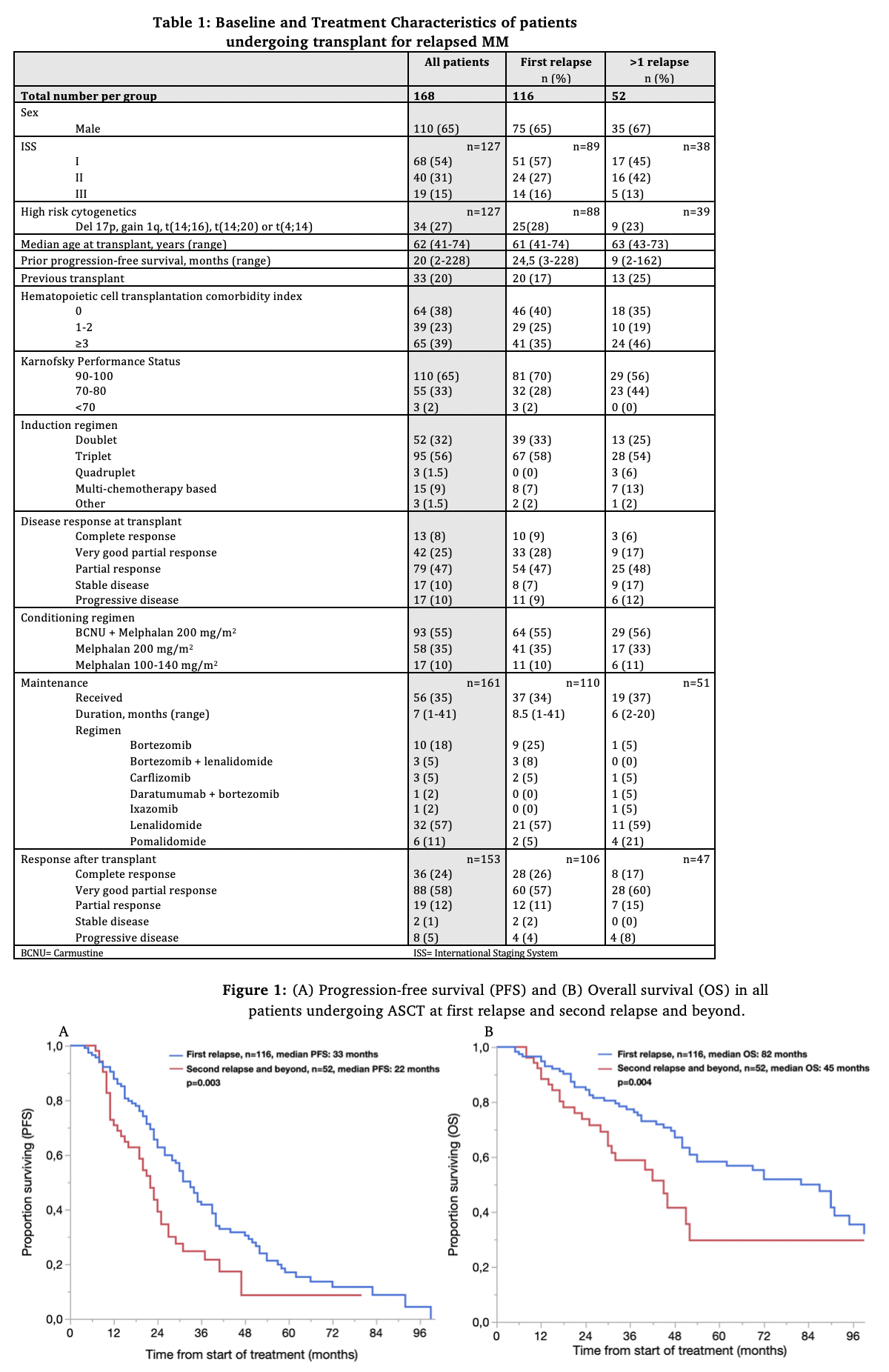