Introduction: Patient-reported outcomes (PROs) such as quality of life (QOL) are variably affected in patients with myelodysplastic syndromes (MDS), but the heterogeneous composition of disease states grouped together as “MDS” increases the difficulty of assessing and understanding these outcomes. Moreover, little is known about the potential relationship between QOL and frailty in this population.

Methods: The NHLBI MDS Natural History Study (NCT02775383) is a prospective cohort enrolling patients undergoing diagnostic work up for suspected MDS or MDS/myeloproliferative neoplasms (MPNs) in the setting of cytopenias. Untreated participants undergo bone marrow assessment with centralized histopathology review at enrollment for assignment into subcategories for longitudinal follow-up: MDS, MDS/MPN, ICUS, AML (<30% blasts), and “At-Risk” (cases with sub-threshold dysplasia or select karyotypic or genetic mutations). PRO and frailty data are collected at enrollment and every six months thereafter. PRO instruments include MDS-specific (QUALMS) and general (FACT-G, PROMIS Fatigue Short Form 7a, EQ-5D-5L) instruments, and a measure of frailty (VES-13). While no frailty instrument alone has been shown to be a substitute for comprehensive geriatric assessment, VES-13 has been successfully used in cancer-related studies for basic screening, where a score of 3 or more is considered frail (vulnerable). An analysis of variance (ANOVA) was used for the overall comparisons of mean baseline scores between diagnostic categories. Pairwise comparisons of scores between diagnostic categories and vulnerability subgroups were performed via two-sample t-tests.

For frail/vulnerable participants with MDS or MDS/MPN (N=87), the most common reasons for vulnerability were age ≥75 years (68%), overall rating of health as poor or fair (62%), and difficulty with prolonged physical activity (90%) such as walking a quarter mile (75%) or doing heavy housework (70%). A minority also were vulnerable due to requiring help with instrumental activities of daily living (iADLS) such as shopping (28%) or managing money (16%). Mean QOL scores were compared between vulnerability subgroups (Figure). Vulnerable participants pooled over all diagnostic categories had significantly worse PROs than non-vulnerable participants for all measures (p<0.001). In particular, vulnerable MDS participants scored significantly worse on the QUALMS (mean 64.4, SD=13.4) vs. non-vulnerable MDS participants (mean 72.7, SD=13.3), p<0.001.

Conclusions: Participants in our cohort with histologically-confirmed MDS—even low-grade MDS—had similar impairments in PROs as those with other cancers. Among those with histologically-confirmed MDS, vulnerable participants had significantly worse QOL on many measures compared to non-vulnerable participants, suggesting that this domain of function be specifically assessed in clinic. Moreover, while a “gestalt” of frailty may be inferred by observing how patients present and move in the office, these data suggest that other contributing domains, such as difficulty with prolonged physical activity and iADLs, should be evaluated explicitly. 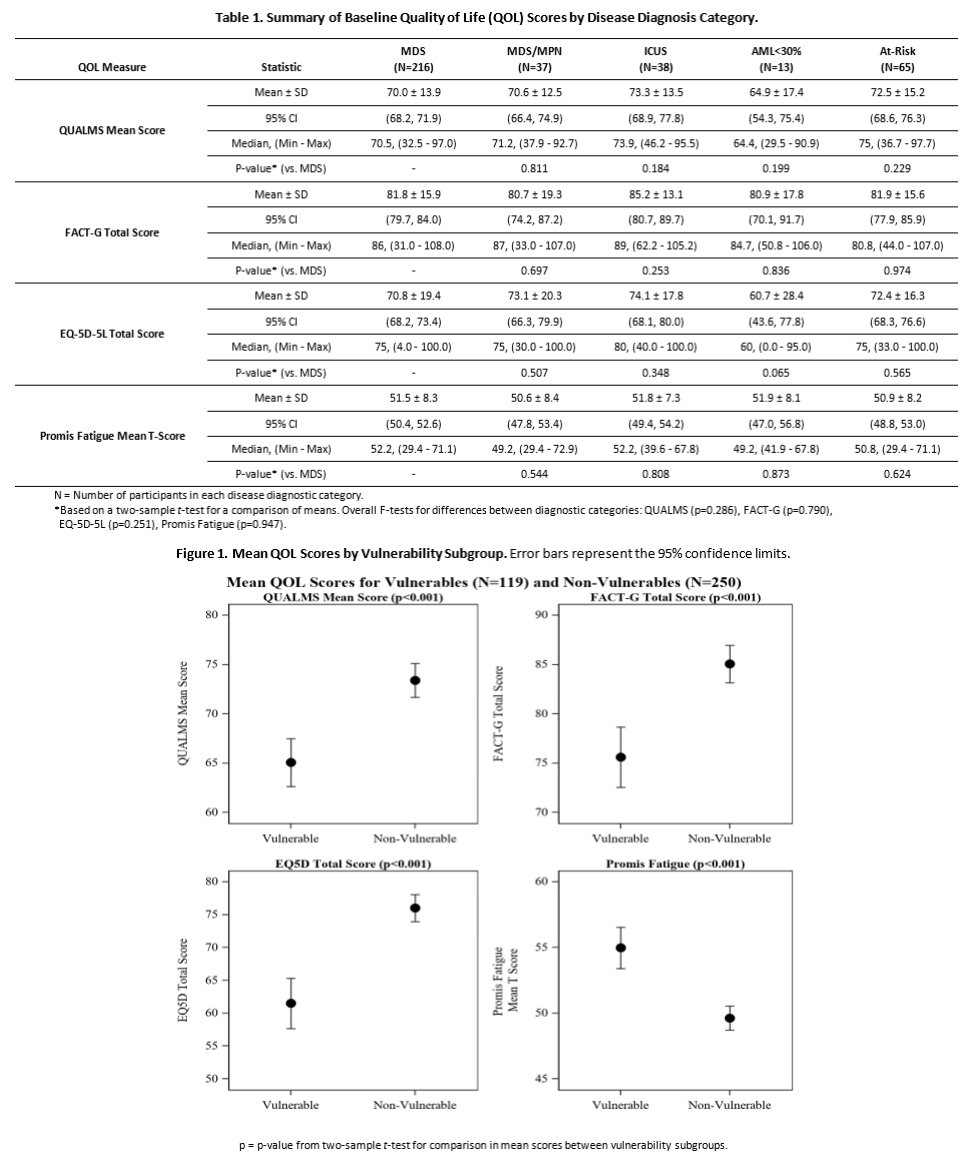