The study randomized 120 pts (1:1) to receive P+A or A alone in 28-day treatment cycles. The European Organisation for Research and Treatment of Cancer (EORTC) quality of life questionnaire – core 30 items (QLQ-C30) was administered at the first day of each cycle, at the end of treatment (EOT) visit and post-EOT visits. Physical functioning (PF), fatigue (FA), dyspnea (DY) and global health status/quality of life (QL) were identified as key PRO concepts that deserved specific attention in this population. Analyses were carried out to explore the PRO data: description of available PRO data, longitudinal analyses of change in the key PRO scores with repeated measurement mixed models (RMMM), including comparison between treatment arms, and descriptive analysis of the key PRO scores after clinical response depending on the type of response (PR, CR, CRi, or HI), and before and after transformation to AML for pts with higher-risk MDS, independently from the treatment received.

There were 112 pts in the PRO population (defined as all pts with a PRO assessment at baseline and at least 1 post-baseline); baseline demographics and disease characteristics are presented in Table 1. At least 90% of pts in the study had a PRO available at each cycle. As expected, the amount of available PRO data decreased over the study due to progression, death, or study discontinuations. The RMMMs of the PRO population did not show any statistically significant difference in the change over time in key QLQ-C30 scores (PF, QL, FA, and DY) between P+A versus A alone. Pts who experienced CR (P+A, 40%; A, 29%) showed a nonsignificant improvement in PF and QL, as well as a nonsignificant decrease of FA after CR than at baseline; no differences were noted in DY. Pts for whom best response was PR had less improvement in the key PROs than pts with CR, and those with HI did not show improvement compared with baseline. Among the 12 pts with higher-risk MDS/CMML progressing to AML during the study with available PRO data (P+A, n=4; A, n=8), 6 showed worsening in PF score (vs 2 improving), 6 showed worsening in QL score (vs 1 improving), 7 showed worsening in FA score (vs 1 improving), and 7 showed worsening in DY score (vs none improving).

Measurement of QL and symptom burden are integral clinical endpoints in assessing new treatments in higher-risk MDS/CMML and LB AML. There was no evidence to suggest that the addition of P to A led to change in the key PROs identified: QL, PF, FA and DY. Achievement of CR was associated with higher PRO scores compared with baseline independently of the treatment received, and progression to AML was associated with worsening QL scores. Additional analyses are planned with the P-2001 PRO data to further explore the impact of P on PROs by evaluating the impact of dropout during the study, comparing findings according to treatment arm, and better understanding the possible effect of adverse events on PROs. 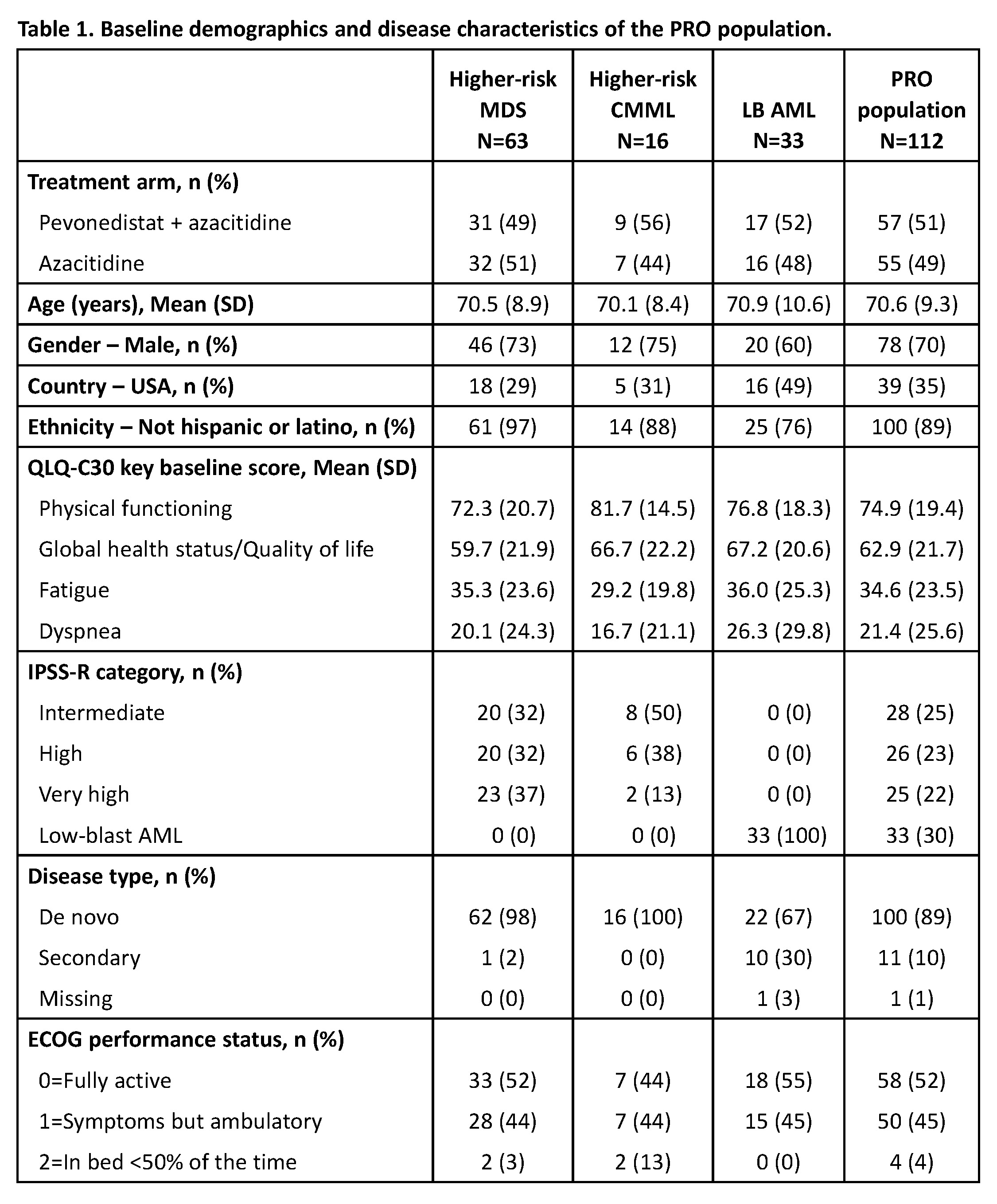