Introduction: Secondary immunodeficiency (SID) occurs, among other reasons, as a consequence of hematological malignancies (HM), most commonly in chronic lymphocytic leukemia (CLL) and multiple myeloma. About 25% of patients present with secondary immune deficiency (SID) at diagnosis of CLL and this incidence may increase to 85% during the course of disease. This increase is also due to recent advances in CLL therapy leading to cumulative immunosuppression. Infections are the main cause of morbidity and mortality in CLL patients, causing between 30% and 50% of deaths within the first year after diagnosis. Intravenous immunoglobulin (IVIg) is established as secondary prophylaxis to reduce infectious complications in patients with HM with hypogammaglobulinemia. To date, no large randomized study has established efficacy of IVIg as primary prophylaxis in CLL patients with hypogammaglobulinemia although several small studies suggest an up-to 4-fold reduction of infection rates.

Methods: This study is planned as a prospective, double-blind, randomized, placebo-controlled, multicenter, interventional phase 3 study and will be conducted in approximately 50 centers in North America and Europe (EUDRA-CT #: 2019-004375-40). The primary objective is to demonstrate the benefit of IVIg 10% (Panzyga®) compared to placebo as primary infection prophylaxis in patients with CLL and SID who are undergoing antineoplastic therapy. A minimum of 240 adult patients with a diagnosis of CLL will be enrolled and allocated 1:1 to either IVIg 10% (0.4 g/kg) plus standard of care (SoC) prophylaxis or placebo plus SoC prophylaxis. Patients will receive up to 13 infusions of IVIg in 4-weekly intervals. Total duration for each patient will be up to 55 weeks consisting of up to 3 weeks for screening, 48 weeks of treatment and then 4 weeks of follow-up.

Main inclusion criteria include: Patients with CLL diagnosis according to International Workshop on CLL (iwCLL) criteria undergoing CLL antineoplastic treatment, and hypogammaglobulinemia with IgG levels <500 mg/dL (5 g/L). Main exclusion criteria include: IgG treatment within the last 3 months, antibiotic prophylaxis and/or treatment within 7 days prior to current CLL treatment start, and current major infection or ˃1 major infection in the previous 6 months before baseline.

The primary efficacy outcome will be the occurrence of at least one major infection defined as (•) bacterial or viral infection resulting in death, (•) microbiologically or clinically documented bacterial or viral infection requiring treatment with anti-infectives, or (•) fever of unknown origin requiring hospitalization or hospitalization prolongation. Rate of occurrence of at least one major infection will be compared between treatment groups (IVIg plus SoC or placebo plus SoC). Secondary outcomes include overall infection rate, frequency of SoC prophylaxis with anti-infectives, duration of anti-infective prophylaxis. Exploratory outcomes include: Quality of life measured by EQ-5D, IVIg PK profiles, and resource utilization.

The primary efficacy evaluation is based on the comparison of major infections in CLL patients with or without primary infection prophylaxis with IVIg. The difference between these proportions will be statistically tested in the ITT population. The Z approximation will be used for statistical comparison of the proportions observed. One-sided 97.5% confidence interval will be provided.

Conclusion: This prospective, placebo-controlled study will evaluate the efficacy and safety of IVIg 10% as primary prophylaxis of infections in CLL patients with SID in a large clinical setting for the first time. 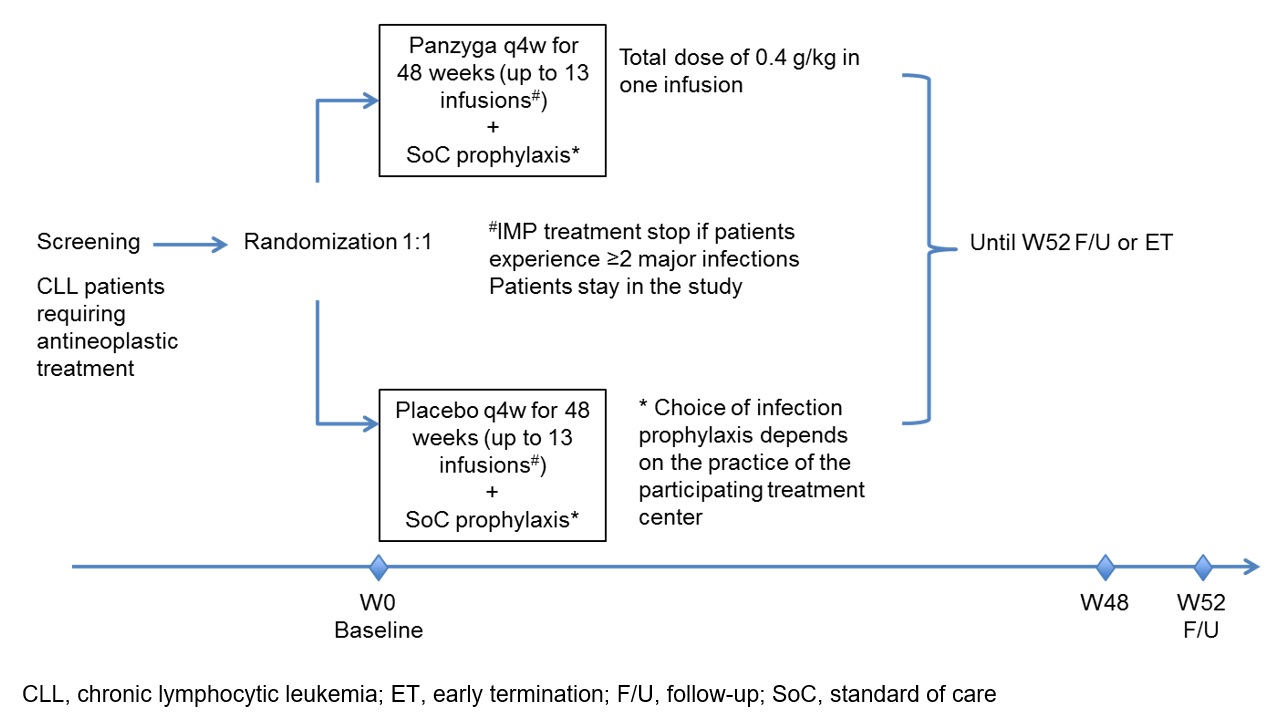