Introduction: For medically fit patients with AML, intensive chemotherapy (IC) is used to induce complete remission (CR). Following CR, some patients may be considered for curative-intent hematopoietic stem cell transplantation. For others, the aim of treatment is to prevent relapse, which usually occurs within 1 year from CR. Post CR, treatment may include consolidation therapy, consisting of chemotherapy given soon after CR is achieved. In addition, maintenance therapy with intravenous (IV) or subcutaneous (SC) injection of AZA has shown evidence of statistically significant improvement in unadjusted time to relapse, though not in unadjusted overall survival (OS), vs placebo (PBO) in randomized controlled trials (RCTs) (Wei. 2019). In the QUAZAR AML-001 trial, maintenance with CC-486, an oral hypomethylating agent, resulted in significant improvements in unadjusted time to relapse and OS vs PBO (Wei et al. 2019). No head-to-head trials have compared CC-486 with AZA.

Objective: To assess the relative efficacy of CC-486 compared with AZA.

Methods: A systematic literature review was conducted to identify RCTs assessing AML maintenance therapy with AZA, for comparison with CC-486. Bayesian network meta-analysis (NMA) compared endpoints of CC-486 and AZA. Hazard ratios (HR), 95% credible intervals (CrI), and surface under the cumulative ranking curve (SUCRA) values were calculated. The impact of differences in potential treatment-effect-modifying characteristics between populations in the NMA was explored using anchored matching-adjusted indirect comparison (MAIC). The NMA was repeated using CC-486 vs PBO efficacy from the MAIC, to satisfy the assumption of clinical similarity necessary in NMA (Hoaglin et al. 2011).

In the MAIC, a structured process was used to evaluate the need for adjustment due to differences in trial populations in the NMA. Populations for each trial were compared (Table). Per methodological guidance (Phillippo et al. 2016), the MAIC sought to adjust characteristics with evidence of (a) treatment-effect-modifying status on the scale of parameters entering the NMA and (b) substantial imbalance across populations. Using the QUAZAR individual patient data, univariate analyses were conducted to determine prognostic and effect-modifying status of variables (Table). For each SC AZA trial, a multivariate Cox model was estimated, including all significant prognostic variables reported, and effect modifiers that remained significant when controlling for prognostic variables and improved model fit. Among variables reported for UK NCRI, no effect modifiers enhanced the multivariate model; for HOVON, treatment interactions with age > 81 years (the oldest age in HOVON) and absolute neutrophil count (ANC) did. MAIC was therefore conducted by re-weighting QUAZAR patients to match means/shares of the HOVON patients, adjusting for mean age, % aged > 81 years, % poor cytogenetic risk, and mean ANC. Effective sample size was 411 (−13% vs N = 472 in QUAZAR). Frequency-weighted, unadjusted (including only a treatment covariate) Cox regression was conducted. After adjusting for effect-modifying differences, the OS improvement of CC-486 vs PBO observed in QUAZAR was maintained in the HOVON population. Incorporating the adjusted HR from the MAIC in the NMA, CC-486 continued to be associated with statistically significant improvement in OS vs SC AZA (HR 0.753; CrI 0.563, 0.998).

Conclusion: Maintenance CC-486 appears to significantly improve OS compared with SC AZA for patients with AML who have achieved CR after IC, based on a systematic analysis of RCT outcomes. 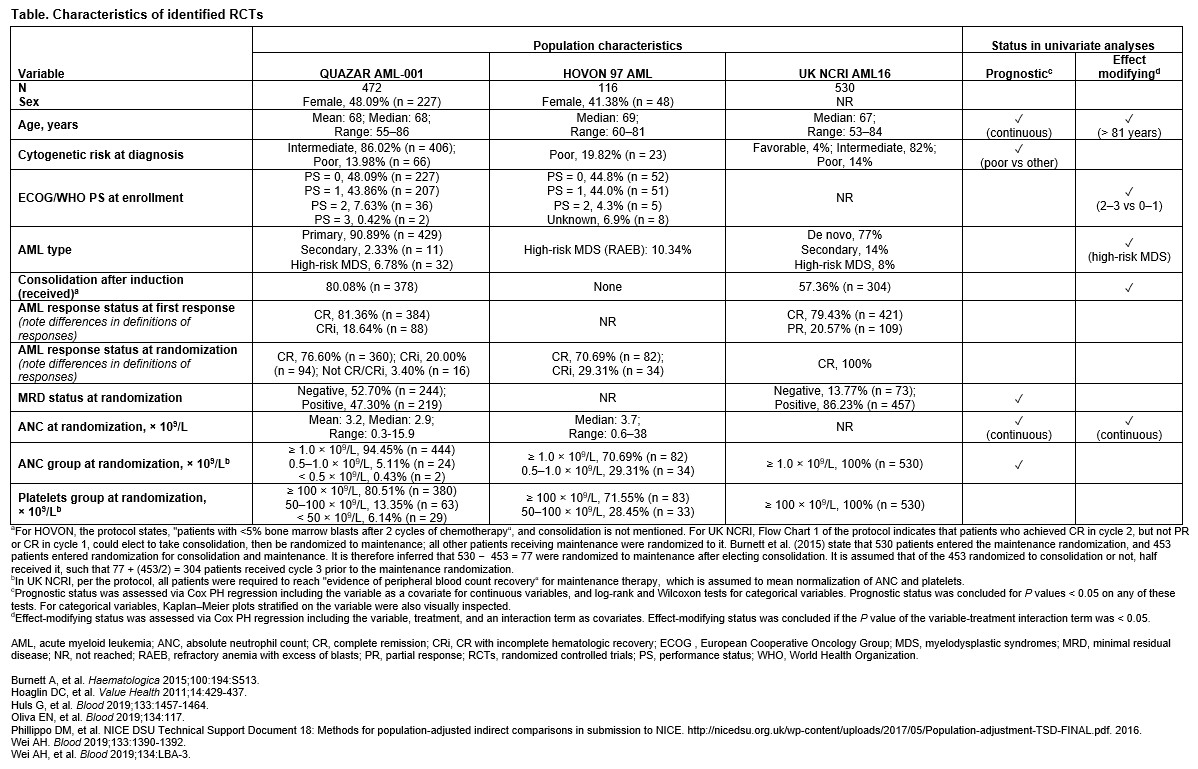