INTRODUCTION: Since 2015, there have been between 10-20 unique chemotherapeutic shortages per year in the United States. Published ethical frameworks consider the following principles as potentially just strategies to allocate chemotherapy during shortages: prioritizing the youngest, those whose disease is most responsive to the scarce medication by volume of drug, those with worse alternatives, or those who have waited longest (Persad, Lancet 2009). To evaluate the impact of these allocation strategies on patient survival during a chemotherapy shortage, we developed a simulation model through the use-case of vincristine, a widely prescribed blood cancer chemotherapeutic recently in shortage.

METHODS: We developed a model to recapitulate scarce chemotherapy allocation at the hospital level. Simulated patients enter the model when they require treatment and are ordered in a queue to receive the scarce chemotherapy—or their best alternative regimen—according to ethically-accepted strategies that prioritize by (1) youngest age, (2) greater efficacy per volume, (3) worse alternatives, or (4) first-come, first-served (the default strategy). For the vincristine use-case, demographic, disease, and treatment data were abstracted from 1689 patients treated at Dana-Farber Cancer Institute from 2015-2019; 3-year treatment regimen survival probabilities and disease risk-adjustments were abstracted from publications cited in the National Comprehensive Cancer Network guidelines. Modeled survival outcomes were validated against Surveillance, Epidemiology, and End-Results Program (SEER) data. Based on the length of the recent vincristine shortage, mean survival rates for a 9-month scenario were modeled according to individual and combination allocation strategies across varying supply levels.

RESULTS: Model functions and risk-adjusted survival probabilities demonstrated no significant differences between the cohort and SEER data, respectively. During the 9-month shortage scenario, a strategy that prioritized patients by greater efficacy per volume significantly increased the mean number of patients surviving at 3-years by >5% across 34.8% of possible vincristine supply levels (grey line and shaded region in Figure) compared to the default of first-come, first-served (red line; all p<0.01). The mean difference in survival over this range was 6.6%. Though a strategy that prioritized drug for those with worse alternatives did not produce improvements over the default by itself, a combination strategy that prioritized by both greater efficacy and worse alternatives produced significant and >5% differences in the mean number of patients surviving across 56.7% of possible supply levels (all p<0.01; blue line and shaded region). The mean survival difference over this range was 7.2%. As compared to the number of patients surviving without any shortage, this combination strategy and the efficacy-only strategy kept statistically similar mean numbers of patients alive for supply reductions 16.7% greater than the default of first-come, first-served (72.2% versus 88.9% of adequate supply, respectively; arrows in Figure). The combination strategy also resulted in a <2.3-year difference in the mean age of surviving patients compared to the youngest age strategy and no increase in mean times to treatment compared to the first-come, first served strategy.

CONCLUSIONS: During a simulated vincristine shortage, a strategy that allocated by both greater efficacy per volume and worse alternatives improved survival compared to either alone, younger age, or the default of first-come, first-served. Moreover, this combined strategy ameliorated reductions in survival across a larger range of drug scarcity than the default. Such a model can be adapted for use for future chemotherapy shortages when multiple ethical allocation strategies exist. 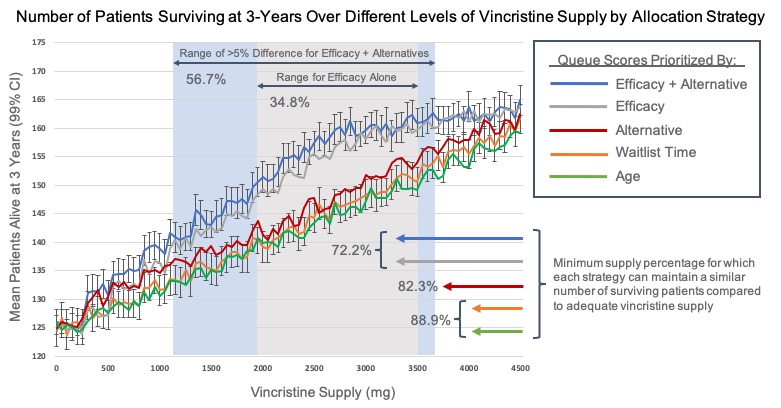