3242 Real-World Treatment Patterns and Outcomes of Proteasome Inhibitor (PI: Bortezomib [V], Carfilzomib [K], or Ixazomib [I])-Lenalidomide/Dexamethasone (Rd)-Triplets By Prior Lenalidomide-Exposure in Patients with Relapsed/Refractory Multiple Myeloma (RRMM) Engaged in Routine Care in the United States (US)

BACKGROUND: PIs combined with an Rd backbone are the most commonly used triplet combination regimens in patients (pts) with RRMM in the US. The hallmark trials supporting the efficacy of these regimens were predominantly in pts without prior exposure to lenalidomide (R).1,2 Real-world analyses have shown that R-based regimens are increasingly used in the front-line setting.3-5 Thus, real-world treatment patterns in pts with prior R exposure and the real-world comparative effectiveness of PI-Rd triplets in this population with RRMM needs further elucidation.

METHODS: A retrospective cohort of RRMM pts initiating IRd, KRd, or VRd in line of therapy (LOT) ≥2 were followed between 7/2007-9/2018 in Optum’s deidentified national electronic health records database. RRMM pts were defined as those initiating LOT ≥2 between 1/2014 and 9/2018 and were categorized as having or not having prior exposure to R (R-exposed; no-prior-R) in any prior LOT. Index regimen was the first use of I-/K-/or V-Rd. LOTs were defined via an algorithm developed with MM specialists to proxy the definition of a LOT in RCTs & in accordance with NCCN MM Guidelines.6 Baseline data included: CRAB (hyperCalcemia, Renal insufficiency, Anemia, and Bone lesions); high risk cytogenetics (defined as del[17p], 1q21 gain, t[4;14], or t[14;16]); Charlson Comorbidity Index (CCI) score; and modified frailty score using age and CCI score. Median duration of therapy (DOT) and time-to-next-treatment (TTNT) (a proxy for PFS; defined as time from index regimen start to subsequent LOT or death) were estimated using Kaplan-Meier methods and compared using covariate-adjusted Cox proportional hazard models (FIGURE). Observations were censored at time of loss to follow-up (f/u)/end of study period (9/30/2018).

CONCLUSIONS: In this real-world study, the majority of pts received a PI-Rd combination after prior VRd or Rd in front-line. After controlling for baseline characteristics, including prior PI-exposure, PI-Rd triplets were comparable in TTNT in R-exposed pts treated in LOTs ≥2. TTNT was significantly longer for I- v K-Rd in pts with no-prior-R, although this is limited by small sample size. Published studies indicate that individualized treatment recommendations may improve real-world outcomes, such as IRd v KRd in frail pts which was associated with significantly longer TTNT.6 Prior-R exposure, in our analysis, does not appear to influence the relative PI-triplet regimen effectiveness in LOTs ≥2. With increasing use of R in earlier LOTs, understanding real-world treatment patterns and subsequent PI-Rd effectiveness in consequent LOTs is key for optimizing RRMM pt management. 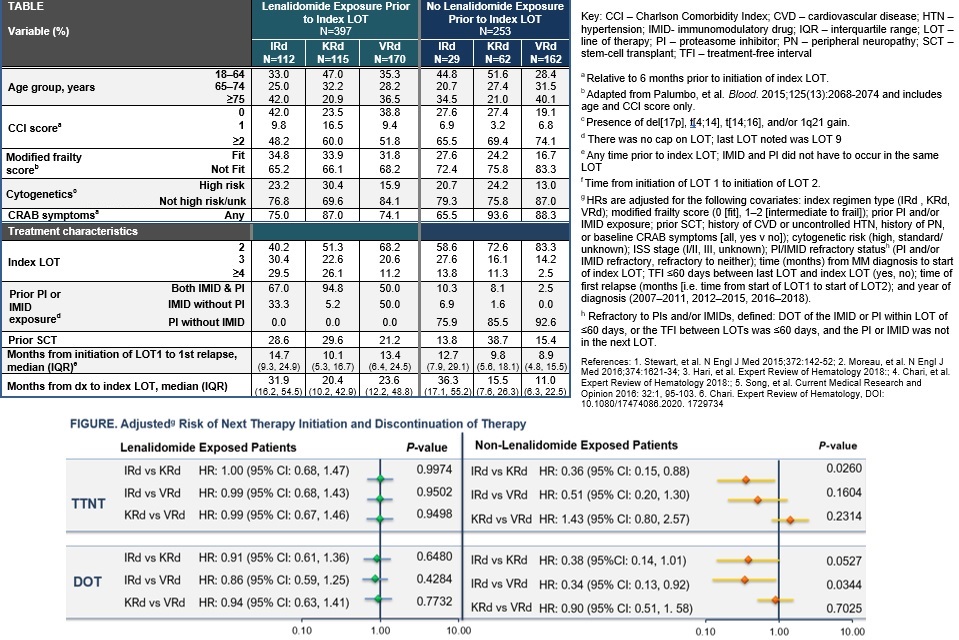