Multipotent mesenchymal stromal cells (MSCs) – part of the bone marrow (BM) niche that regulates hematopoietic stem cells (HSC), are damaged in patients with leukemia. In most patients with diffuse large B-Cell lymphoma (DLBCL), the BM is not involved in the tumor process. Despite the absence of proved BM damage in DLBCL patients, the properties of MSCs are changed. We aimed to compare functional properties of MSCs from the BM of patients in the onset of the disease, one month after treatment and more than 5 years in complete remission after treatment (R-CHOP or R-mNHL-BFM-90).

The study included MSCs derived from the BM of 87 DLBCL patients (40 males and 46 females). Forty one MSC samples (14 mails and 27 females, median age 54) were studied in the onset of the disease and a month after the end of treatment. Forty six MSC samples were obtained from the BM of patients in complete remission long-term after treatment (L-TAT): NHL-BFM90 (14 males and 13 females, median age 63) and R-CHOP (6 mails and 13 females, median age 61). Control group included 30 healthy donors (10 males, 20 females, median age 54). 3-5 ml of BM were collected during diagnostic punctures after informed consent. MSCs and colony forming unit fibroblast (CFU-F) were cultured by standard methods. The total MSCs production, the concentration of CFU-F in the BM, the relative gene expression level (REL) in MSCs by real-time PCR and the mean fluorescence intensity (MFI) by flow cytometry were analyzed. Confluent MSCs layers after 1 passage were cultivated in serum-free RPMI1640 medium without phenol red for 24 hours; supernatants were studied for secretome. The secretome analysis was carried out using the LC-MS/MS analysis TripleTOF 5600+ mass spectrometer with a NanoSpray III ion source coupled to a NanoLC Ultra 2D+ nano-HPLC System.
Results

The data are presented in the table. The total MSCs production increased in patients with DLBCL compared with donors at the onset of the disease, one month after the end of treatment, and L-TAT continues to be increased regardless of the course of therapy, but not significant. This change in the properties of MSCs is in good agreement with the increased REL of FGF2 at the onset of the disease and one month after the end of the treatment; however, L-TAT expression of this gene was normalized. At the onset of the disease, the expression of FGFR2 was increased and L-TAT remains elevated after NHL-BFM90, while the expression of FGFR1 was significantly reduced in patients, regardless of the time after the end of the treatment. The REL of genes involved in MSCs differentiation (PPARg, SOX9, SPP1, BMP4) was markedly altered after treatment. Thus, the regulation of the growth and differentiation potential of MSCs was altered in patients and was not adequately restored in long-term remission. The REL of genes involved in HSC regulation (SDF1, TGFb, PDGFRb, MCAM, ICAM1 and MMP2) changed after the treatment, the most pronounced differences was indicated long-term after NHL-BFM90. Expression of the majority of MSCs surface markers in patients was increased at the onset of the disease and did not normalize after a month and L-TAT. Moreover, the MFI of CD146, CD73 and CD105 depended on the course of treatment. The patients MSCs secretome was significantly changed in comparison with donors MSCs, the changes persisted after treatment, and strongly depended on the course of the therapy. MSCs of patients long-term after NHL-BFM90 had increased secretion of proteins from 58 pathways, and decreased secretion of proteins from 103 pathways compared with MSCs derived from the BM of patients long-term after R-CHOP. Eleven pathways were changed in the opposite direction, among them, in particular, pathways related to immune response and innate immune system.

Stromal progenitor cells from the BM of patients with DLBCL without BM involvement at the onset of the disease differ from cells of healthy donors in cultural and functional characteristics (expression of surface antigens and gene expression profile). After achieving remission of the disease, these changes are only partially normalized, however, new changes appear associated with the chemotherapy. Fully morphofunctional characteristics of stromal progenitor cells do not normalize even 5 or more years after the end of chemotherapy.

The work were supported by the Russian Foundation for Basic Research, Project No. 17-04-00170. 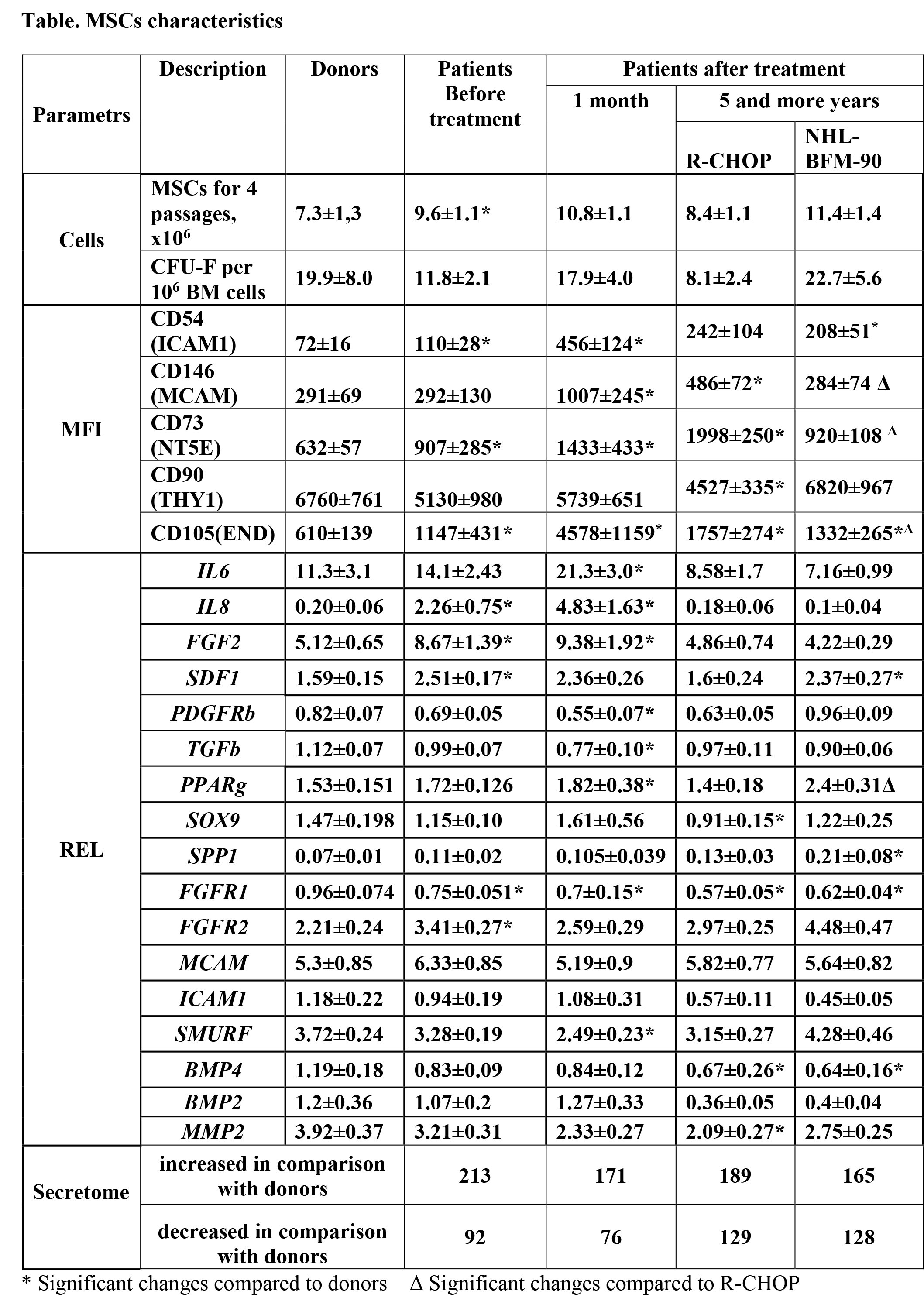