Introduction: Multiple myeloma (MM) is a neoplastic disease that typically affects elderly patients (pts), with a median age at diagnosis of 69 years. Elderly pts are a heterogeneous group with fitness ranging from very frail to remarkably fit. Frailty is a state of cumulative decline in many physiological systems, leading to a diminished resistance to stressors, such as cancer and its treatment. Isatuximab (Isa), a monoclonal CD38 antibody, is approved in combination with pomalidomide and dexamethasone (Pd) in the United States, the European Union, Canada, Australia, Switzerland, and Japan for the treatment of adult pts with relapsed/refractory MM (RRMM) who have received at least two prior therapies, including lenalidomide and a proteasome inhibitor (PI). The Phase 3 ICARIA-MM study (NCT02990338) demonstrated the efficacy and safety of Isa-Pd in pts with RRMM. Progression-free survival (PFS) was significantly improved with Isa-Pd vs Pd, and in elderly pts ≥75 years it was 11.4 vs 4.5 months (HR 0.48; 95% CI 0.24–0.95). This post hoc analysis used a frailty score derived from pt baseline characteristics to investigate the impact of frailty on clinical outcomes and toxicity in pts receiving Isa-Pd vs those receiving Pd.

Methods: A total of 307 pts (154 Isa-Pd, 153 Pd), who had received ≥2 prior lines, including lenalidomide and a PI, were randomized. The Isa-Pd arm received Isa 10 mg/kg intravenously weekly for the first 4 weeks, then every 2 weeks thereafter. Both arms received recommended doses of Pd. Treatment continued until disease progression or unacceptable adverse events (AEs). Frailty scores at baseline were calculated based on age, modified Charlson Comorbidity Index ([CCI], calculated using the medical history recorded on physical examination at baseline), and Eastern Cooperative Oncology Group (ECOG) performance status. Pts with no medical history available were excluded from the analysis. Pts with frailty score sums of 0, 1, or ≥2 were classified as fit, intermediate, or frail, respectively. 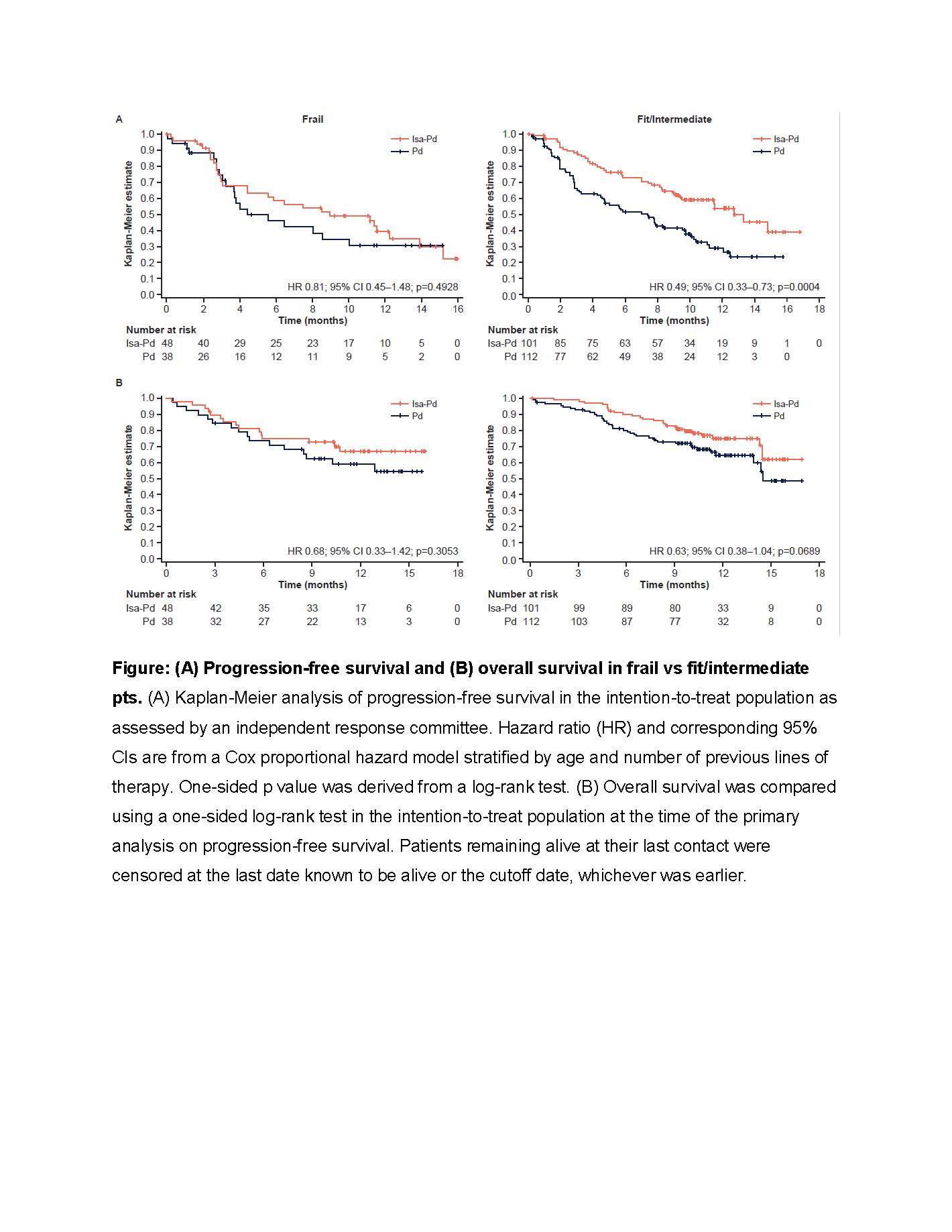