Methods: Patients were ≥18 years of age with a diagnosis of MM per International Myeloma Working Group criteria, measurable disease, and Eastern Cooperative Oncology Group performance status ≤1. Patients had received ≥3 prior regimens for MM or were double-refractory to a proteasome inhibitor and immunomodulatory drug, and had received an anti-CD38 antibody. Cilta-cel was given as a single infusion on Day 1 (target dose: 0.75×106 [range: 0.5–1.0×106] CAR+ viable T cells/kg) 5–7 days after start of lymphodepletion (cyclophosphamide 300 mg/m2 + fludarabine 30 mg/m2 daily for 3 days). In the phase 2 portion of CARTITUDE-1, HRQoL was assessed at baseline, on Days 7, 28, 56, 78, and 100, and every 28 days thereafter using 3 patient-reported instruments: the European Organization for Research and Treatment of Cancer QoL Questionnaire Core 30 (EORTC QLQ-C30), 4 items from the EORTC QLQ-Multiple Myeloma (MY20) module, and the 5-level EuroQol Five Dimension (EQ-5D-5L) measure. Raw EORTC QLQ-C30 and EORTC QLQ-MY20 scores were linearly transformed to a scale ranging from 0 to 100; the EQ-5D-5L visual analog scale (VAS) score ranges from 0 to 100. Clinically meaningful changes in EORTC QLQ-C30 symptoms, physical functioning, and overall HRQoL were based on anchor-based methods using a patient global impression of change item. Repeated-measures mixed-effects models were used to analyze mean changes in HRQoL from baseline to subsequent assessment time points in patients in the modified intent-to-treat population with ≥1 post-baseline assessment. Median time to event of HRQoL scores was calculated descriptively, using a change in score ≥0.5×standard deviation of values prior to cilta-cel infusion as improvement/worsening with death due to progression defined as worsening.

Results: For the 68 patients in the phase 2 portion of CARTITUDE-1 (63.2% male; median age: 62.0 years [range: 43–78]), questionnaire completion rates at baseline and Day 100, respectively, were 92.6% and 69.2% for both the EORTC QLQ-C30 and EORTC QLQ-MY20 items and 92.6% and 70.8% for the EQ-5D-5L. For EORTC QLQ-C30 subscales, clinically meaningful improvements at Day 100 were seen for 71.1% of patients for pain, 62.2% for fatigue, 72.1% for physical functioning, and 51.1% for global health status. Mean changes in pain and fatigue showed a reduction in these symptoms over time (following an initial worsening of fatigue at Day 7; Figure). This trend of improvements over time was also observed for overall HRQoL and EORTC QLQ-MY20 single items. Clinically meaningful improvements at Day 100, defined by a literature-based minimal important difference of 10 points in mean score, were observed for the EORTC QLQ-MY20 single items: thinking about illness and worries about dying or future health. Approximately 50% of the population reported an event of improvement or worsening in EORTC QLQ-C30 and EQ-5D-5L scales, with the rest censored in this early data cut; among these patients, median time to improvement was approximately 1–2 months (with median time to worsening occurring less than 1 month after cilta-cel treatment). There was a trend for an improvement in mean EORTC QLQ-C30 global health status, physical functioning, pain, and fatigue, and EQ-5D-5L VAS at Day 100 with increased depth of response.

Conclusions: Some patients with heavily pretreated MM showed rapid and clinically meaningful improvements in pain, fatigue, physical functioning, overall HRQoL, and future perspectives, consistent with their clinical outcomes. With additional follow-up, it is possible that these early improvements in symptoms will translate into greater improvement in overall HRQoL in the long term. 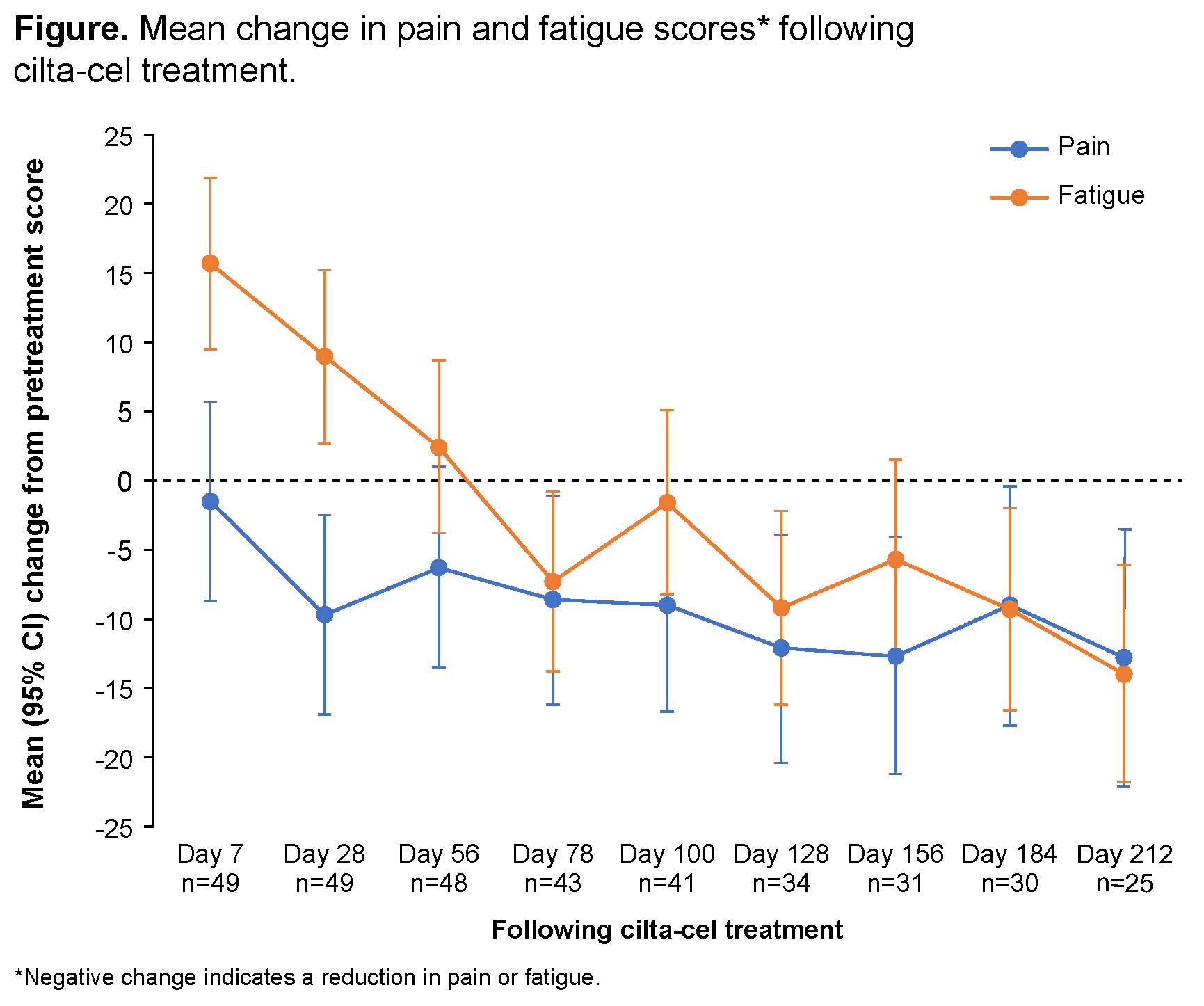