Aims: The I-WISh cross-sectional survey assessed the burden of ITP and its impact on QoL using a global pt and physician (MD) sampling frame which explored the relationship between ITP symptoms, including anxiety and depression, and pt-reported emotional outcomes, as well as impact of treatment.

Methods: Pts were recruited via MDs and pt advocacy groups (PAGs). The survey captured demographics, signs and symptoms, impact of symptoms, and pt–MD relationships. A steering committee of expert MDs and PAG ITP specialists designed and endorsed the survey. ITP emotional impact on pts was evaluated based on pt agreement with emotional concern statements (on a 7-point Likert scale, where 7 = strongly agree). Scores of 5-7 were banded to indicate agreement unless stated otherwise.

Results: 1507 pts from 13 countries completed the survey; mean pt age was 47 yrs and 65% were female. 49% of pts felt ITP had majorly impacted their emotional wellbeing. Pts’ main worries were platelet count fluctuations occurring for no apparent reason (63%) and disease worsening (63%); in addition, 41% of pts worried about dying.

Pts who worried greatly about dying, about their ITP worsening, and about an unstable platelet count had similar ages and slightly shorter duration of disease compared with those who did not worry greatly (6-8 vs 10-12 yrs, respectively).

Pts who responded ‘worry about dying’ ≥ 6 were more likely than those ≤ 2 to be receiving corticosteroids (CSs) at the point of data capture (40% vs 20%). Pts on thrombopoietin receptor agonists rated all 3 statements either ≥ 6 or ≤ 2 with similar frequency.

Conclusion: Anxiety/worry around unstable platelet counts and disease worsening were among the most common emotional concerns. Fatigue was the most commonly reported symptom, regardless of other emotional concerns, and was greater among females as were headaches. Pts with high emotional burden experienced most ITP symptoms more frequently compared with those who did not worry greatly. The notably high % of pts who worried about dying reflects the profound emotional impact of ITP and which may be exacerbated by CSs. 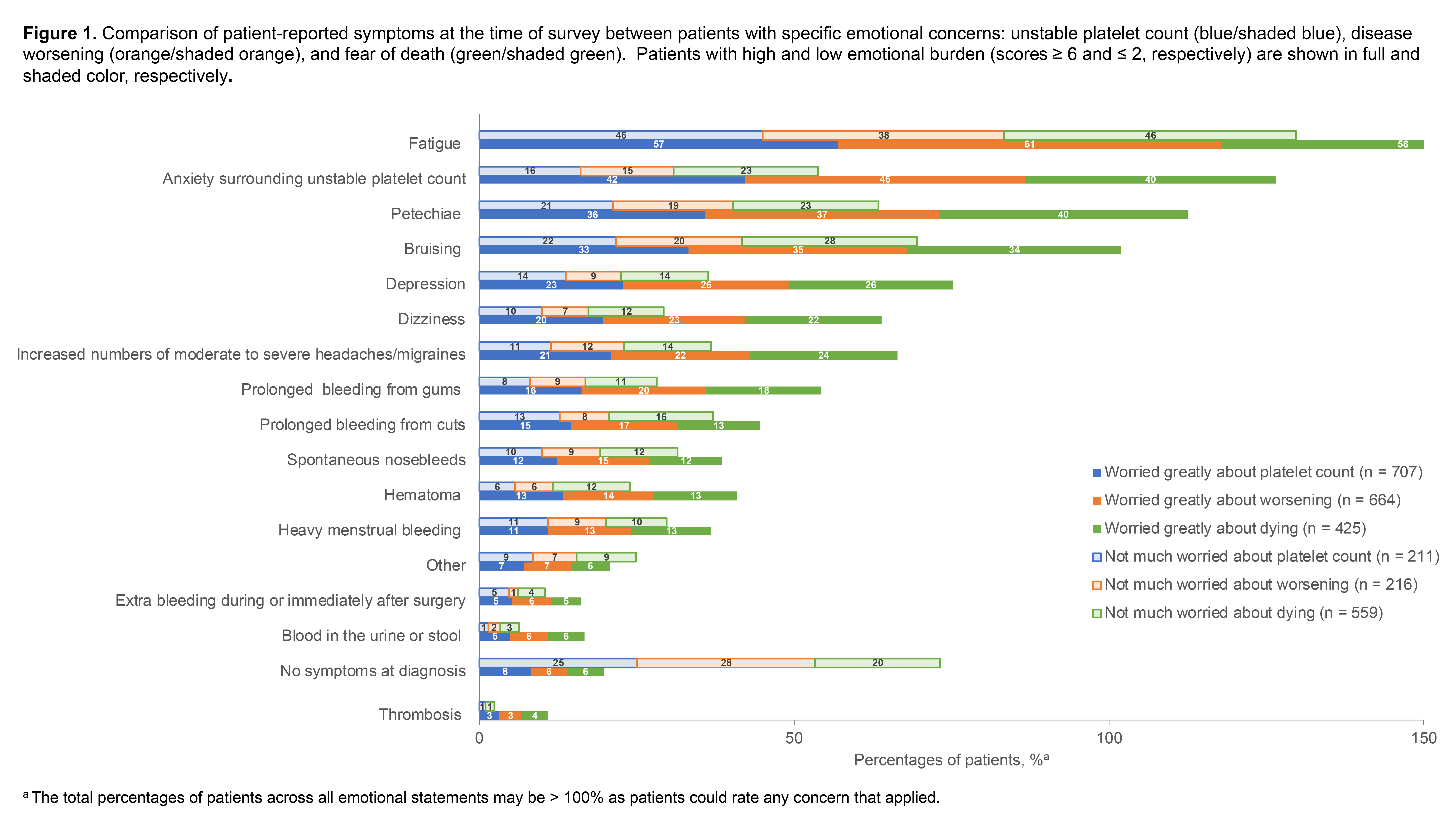