Introduction: Patients with myelodysplastic syndromes (MDS) experience severe anemia, which is commonly managed with frequent red blood cell transfusions (RBCT) in patients refractory to erythropoiesis-stimulating agents. At diagnosis, 85% of patients have anemia and 30–50% depend on RBCT. The administration of RBCT itself provides transient relief in anemia-related symptoms. Per protocol, MEDALIST investigators were advised to transfuse for symptoms related to anemia at the investigators’ discretion. Hence, cessation or reduction of RBCT may increase anemia-related symptoms and negatively impact health-related quality of life (HRQoL). Luspatercept is a first-in-class erythroid maturation agent providing clinically meaningful reduction in transfusion burden in patients with transfusion-dependent anemia due to Revised International Prognostic Scoring System (IPSS-R)-defined Very low-, Low-, or Intermediate-risk MDS with ring sideroblasts in the phase 3 MEDALIST trial (NCT02631070). However, the impact of luspatercept on patients’ HRQoL has not been evaluated. This analysis aimed to evaluate the effect of luspatercept versus placebo on HRQoL of patients treated for MDS from baseline through Week 25 of the MEDALIST study.

Methods: Patients received luspatercept or placebo every 3 weeks for 24 weeks, plus best supportive care (BSC), including tailored amounts of RBCT. Effects of luspatercept versus placebo on HRQoL were evaluated as secondary and exploratory endpoints in the MEDALIST study. In the primary analysis, mean change from baseline to Week 25 (clinical assessment visit) in the European Organisation for Research and Treatment of Cancer’s core quality of life questionnaire, version 3.0 (EORTC QLQ-C30) and in the QoL assessment in MDS questionnaire (QOL-E) was determined using mixed-effects repeated measures analysis. Clinically meaningful change within each treatment arm was defined as a ≥ 10-point change in patient-reported outcome (PRO) score from baseline for all EORTC QLQ-C30 domains, and ≥ 0.5 standard deviation of the baseline domain score for all QOL-E domains. Differences between luspatercept and placebo were considered clinically meaningful if the change from baseline between treatment arms exceeded the threshold for a clinically meaningful difference. In an exploratory analysis, patient-reported impact of transfusion dependence and overall side effects on their daily life was estimated using the QOL-E instrument.

Conclusions: Luspatercept with BSC reduced RBCT burden and patient-reported transfusion impact on their daily life, while maintaining other aspects of HRQoL from baseline through Week 25 in the MEDALIST study. 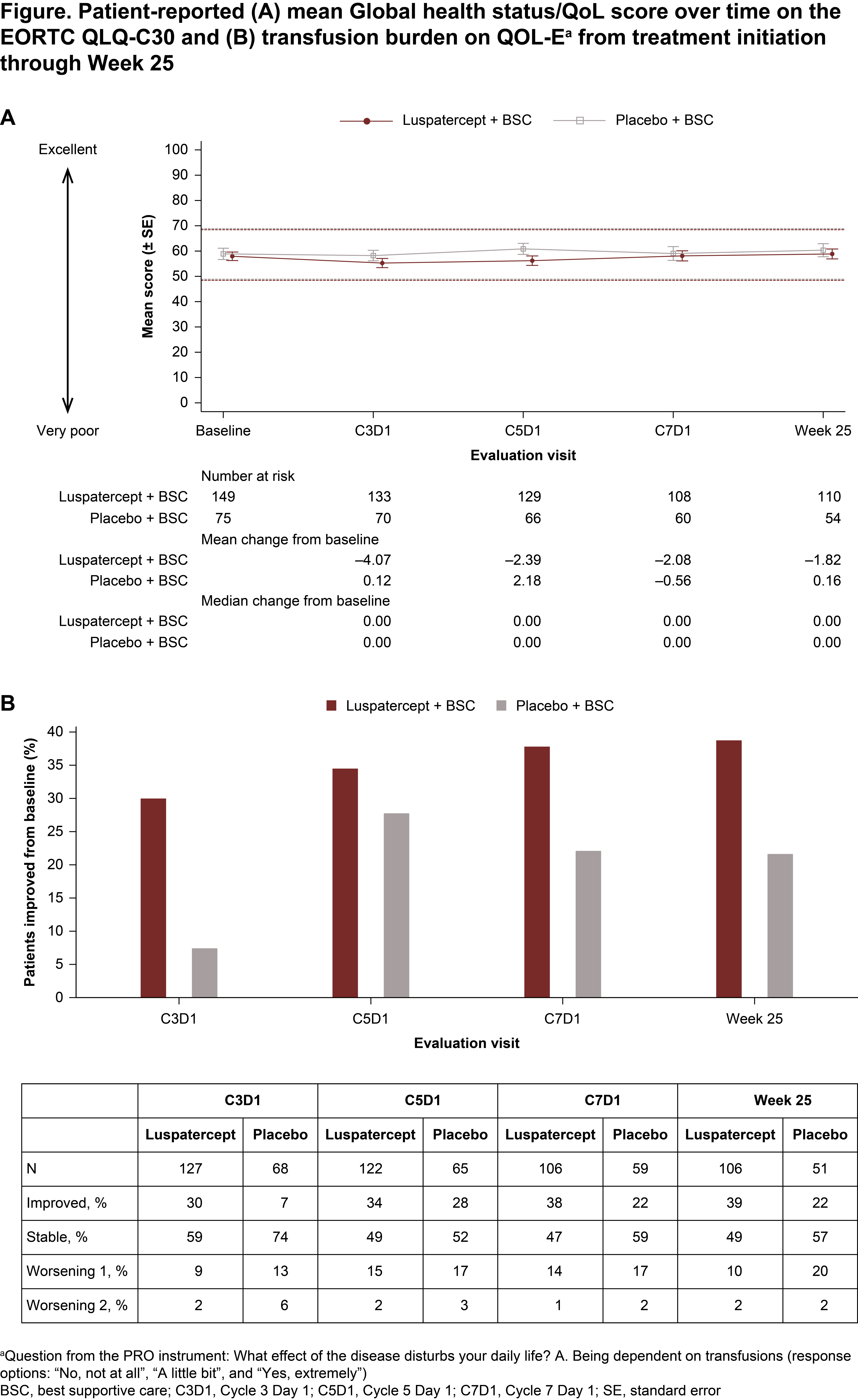