CPT, a recombinant permuted human TNF-related apoptosis-inducing ligand (TRAIL), is a first-in-human anti-myeloma drug targeting death receptor 4/5. CPT was found to be a safe and effective anti-myeloma drug as a monotherapy and combined with thalidomide and dexamethasone (TD) in phase 1 and 2 studies for relapsed or refractory multiple myeloma (RRMM) patients. In order to verify the effectiveness and safety of CPT, we have conducted this multi-center, double-blind, placebo-controlled phase 3 study.

CPT or placebo at a dose of 10 mg/kg was intravenously administered on days 1 to 5, both groups receive dexamethasone 40 mg orally on days 1 to 4, and thalidomide 150mg daily, 28 days per cycle until to disease progressions or unacceptable toxicity. The primary endpoint was progression-free survival (PFS), and the secondary endpoints were overall survival (OS), overall response rate (ORR), time to progression (TTP), time to response (TTR), duration of response (DOR), health related quality of life (HRQoL) and safety.

Of the 417 patients enrolled, 415 patients received CPT+TD (n=276) or placebo+TD (n=139) treatment. The demographic, baseline disease and clinical characteristic of the two groups were comparable. The median age of the patients was 59 years, and the median time from the initial diagnosis of multiple myeloma (MM) to participating this trial was 2.6 years. The median number of lines of prior therapies was 3. Proteasome inhibitors (PI) and immunomodulators (IMiD) were previously used in 74% and 86.5% of patients, respectively.

At date cutoff, the primary endpoint of PFS was significantly longer in the CPT group than in the control group (median 5.5 vs. 3.1 months; hazard ratio [HR] 0.619; P<0.0001) (Figure). The key secondary endpoints, including ORR (30.4% vs. 13.7%, P=0.0002) and OS (median 21.8 vs.17.0 months; HR, 0.723; P=0.0166) were also significantly improved in the CPT group than in the control group (Figure). Subgroup analysis of PFS, OS and ORR showed the superiority of CPT+TD over placebo +TD in almost all subgroups (Figure). It is particularly interesting to note that CPT exhibited excellent efficacy consistently with PFS, OS and ORR in the subgroups of patients with a poor prognosis, including those with refractory MM, with previous PI and IMiD therapies, and those received >3 lines of prior therapies. PFS and ORR were also significantly improved in the patients with PI and IMiD double-refractory MM. The other secondary endpoints including TTP, DOR and HRQoL also showed the superiority of the CPT group over the control group. To date of cutoff, the events of disease progressions or death occurred in 203 patients (73.6%) in the CPT group vs.111 patients (79.9%) in the control group.

The serious adverse events (SAE) rates were similar in the CPT group and the control group (40.6% vs. 37.4%), as were the death rates during the treatments (7.6% vs. 8.6%). Treatment-emergent adverse events (TEAEs) with at least a 10% greater frequency in the CPT group vs. the control group were elevated alanine transaminase (ALT), elevated aspartate transaminase (AST), elevated lactate dehydrogenase (LDH), increased monocyte counts, hypocalcaemia and upper respiratory tract infections. The data suggested that CPT may induce hepatotoxicity in patients, most of which were grade 1 or 2 and reversible. Grade 3 or 4 TEAEs observed in the CPT group and the control group included decreased neutrophil counts (26.8% vs. 26.6%), pneumonia (25% vs. 23.7%) and hyperglycemia (21% vs. 12.2%).

This study demonstrated that CPT was an effective drug for the treatment of RRMM patients, even in the multi-line treated MM patients and PI and/or IMIDs refractory MM patients. The combination of CPT with TD significantly prolonged the PFS and OS, increased the ORR. CPT combined with TD was well tolerated, the adverse events were mild, transient and reversible. CPT is expected to be the first available anti-myeloma drug that targets death receptor 4/5. 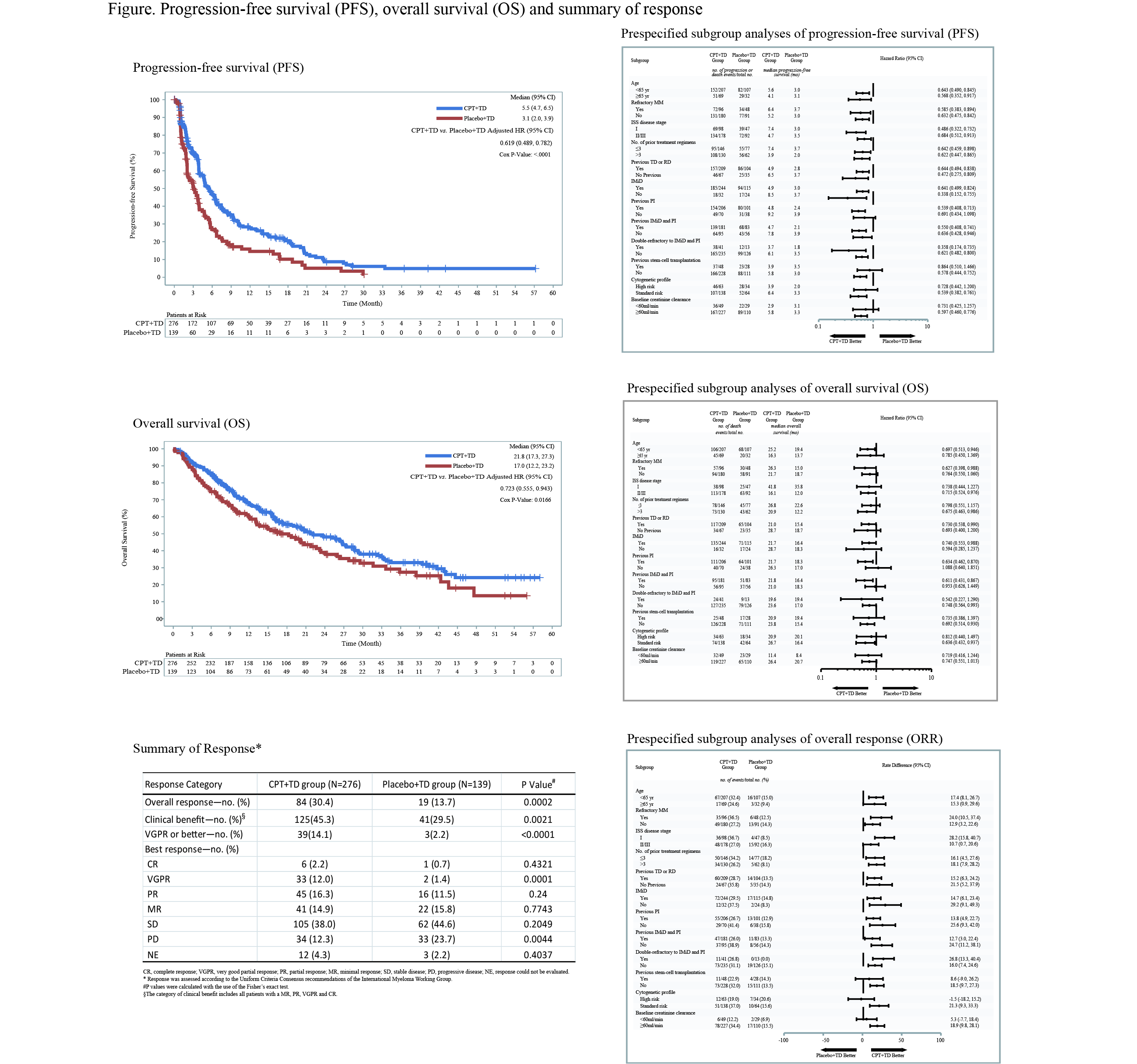