Introduction: Diagnosis of MDS and AML requires an integrated approach based on morphologic, cytogenetic, and molecular genetic tests to inform prognosis and treatment decisions. The World Health Organization (WHO) updated its classification criteria for MDS and AML in 2016 (Arber DA, et al. Blood. 2016;127:2391-2405). However, the impact of these criteria on diagnostic testing patterns in routine clinical practice is unknown. We investigated molecular testing patterns for pts with MDS and AML treated in academic (AC) or community/government (CO/GOV) sites in the Connect® MDS/AML Registry.

Methods: The Connect® MDS/AML Disease Registry (NCT01688011) is a large, ongoing, prospective, observational cohort study of pts with MDS aged ≥ 18 years or AML aged ≥ 55 years. Demographic and baseline characteristics and laboratory testing data were collected from pts enrolled in the Registry between December 12, 2013 and the data cutoff for this analysis of December 13, 2019. Patterns of molecular diagnostic testing were compared between the MDS and AML cohorts and between pts enrolled before January 1, 2017 and from January 1, 2017 onward. Logistic regression was used to identify factors associated with increased molecular diagnostic testing in the MDS and AML cohorts.

Conclusions: Molecular diagnostic testing rates increased in daily clinical practice in the Connect® MDS/AML Registry after the publication of the WHO 2016 criteria, including for SF3B1. However, rates remained lower for pts with MDS than pts with AML. This may reflect the lack of targeted therapies for MDS, although select mutations have important prognostic value in MDS. Elderly pts (MDS: ≥ 80 years; AML: ≥ 75 years) had lower rates of molecular testing than younger patients. Further education may be required to ensure that all pts who would benefit should undergo molecular testing. 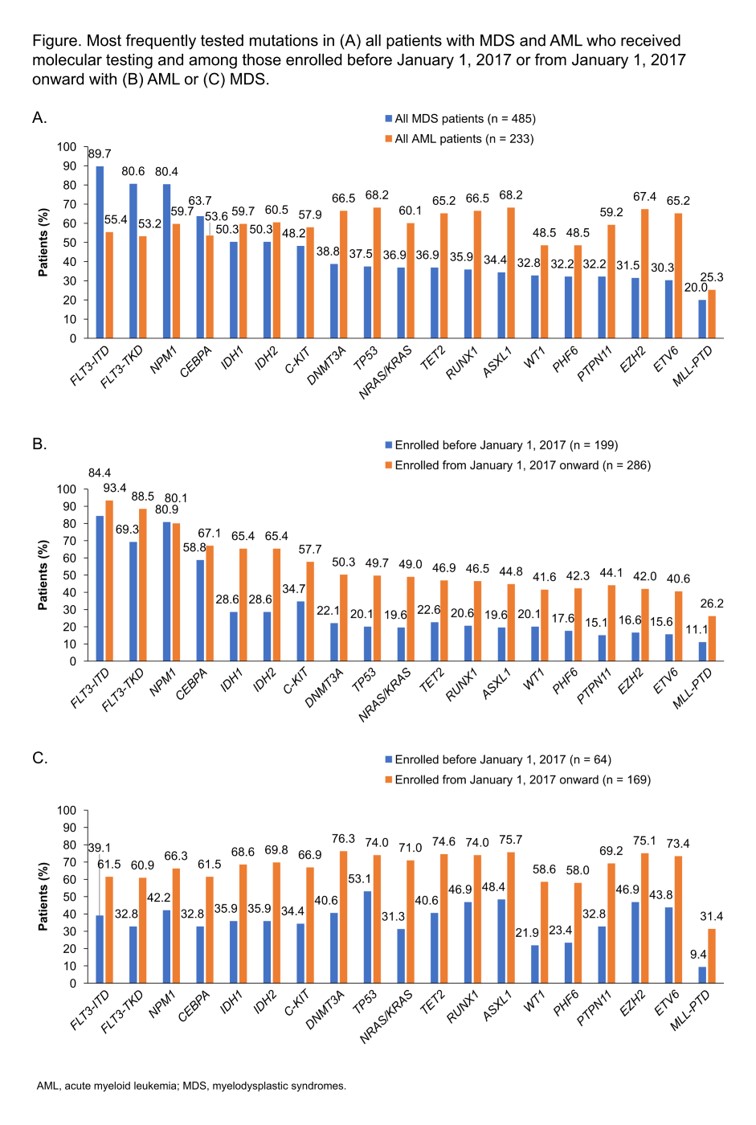