Plasmablastic lymphoma (PBL) is a rare, aggressive large cell lymphoma, first described in 1997. PBL is strongly associated with immunodeficient states, such as HIV infection and solid organ transplantation, but up to one third of cases are reported to occur in immunocompetent patients. The pathogenesis of PBL is incompletely understood, though the oncogenic impact of EBV, in particular in the context of dysregulated immune surveillance, together with acquired abnormalities in the MYC pathway appear to play key roles in many cases. Plasma cell markers such as CD138 and CD38 are typically positive, as well as CD30 in a significant subset. Classical B cell markers such as CD20, CD19 and PAX5 are typically absent.

The literature on clinical outcomes in PBL is generally limited to small, single-centre case series. Reports describe an aggressive disease of poor prognosis, with median survival of 8 to 15 months, with one series reporting a longer median survival of 32 months.

We retrospectively identified patients diagnosed with PBL between 1999 and 2019 from 16 sites across Australia, the United Kingdom and Canada. Patients aged ≥18 years with confirmed tissue diagnosis of PBL at their local treating centre were included. Factors associated with overall survival (OS) were analysed using Cox regression, stratified by site to account for heterogeneity across sites. Risk time for mortality began on the date of diagnosis and ended on the date of death. Patients who were alive, lost to follow-up or transferred to another centre for care, were censored on the date of last follow-up. Risk factors analysed included age, year of diagnosis, HIV status, MYC rearrangement status, CD30 status, lactate dehydrogenase level, disease stage by Lugano consensus criteria, and bone marrow involvement.

We identified 197 patients with PBL (Table 1). The median age at diagnosis was 55 years (range 18-95) and there was a male predominance (69%). 37% of patients were HIV positive, 56% were HIV negative and 7% were either not tested or had missing results. Other immunosuppressive risk factors included solid organ transplant, allogeneic stem cell transplant (SCT), and immunosuppressive medication. No immunodeficient state was detected in 44%. Fifty per cent of patients were stage IV at diagnosis. Fifty-four per cent were staged using PET/CT.

The median follow-up time from diagnosis was 1.36 years, with the longest follow up out to 18.4 years. There were 87 deaths (44%). For patients receiving first-line treatment with curative intent, the rate of complete remission was 57% (103 of 181 patients). Most patients (53%) received CHOP (cyclophosphamide, doxorubicin, vincristine, prednisolone)-based chemotherapy as first line, and 27% treatment of higher intensity than CHOP. Rituximab was administered to 20% and 10% were exposed to proteasome inhibitors as part of first line therapy. Five percent of patients underwent autologous SCT in first remission, and a further 5% after first relapse or later.

We report a multinational retrospective cohort of patients diagnosed with PBL and to our knowledge the largest single series of PBL to date. OS was longer than previously published data, particularly in patients with early-stage disease. However, patients with stage IV disease and baseline bone marrow involvement had inferior OS. HIV infection did not affect outcome. These findings suggest that baseline bone marrow biopsy and PET staging are useful prognostic tools. There is also an ongoing need for the evaluation of the predictive value of PET imaging and novel agents in PBL, especially in higher-risk disease. 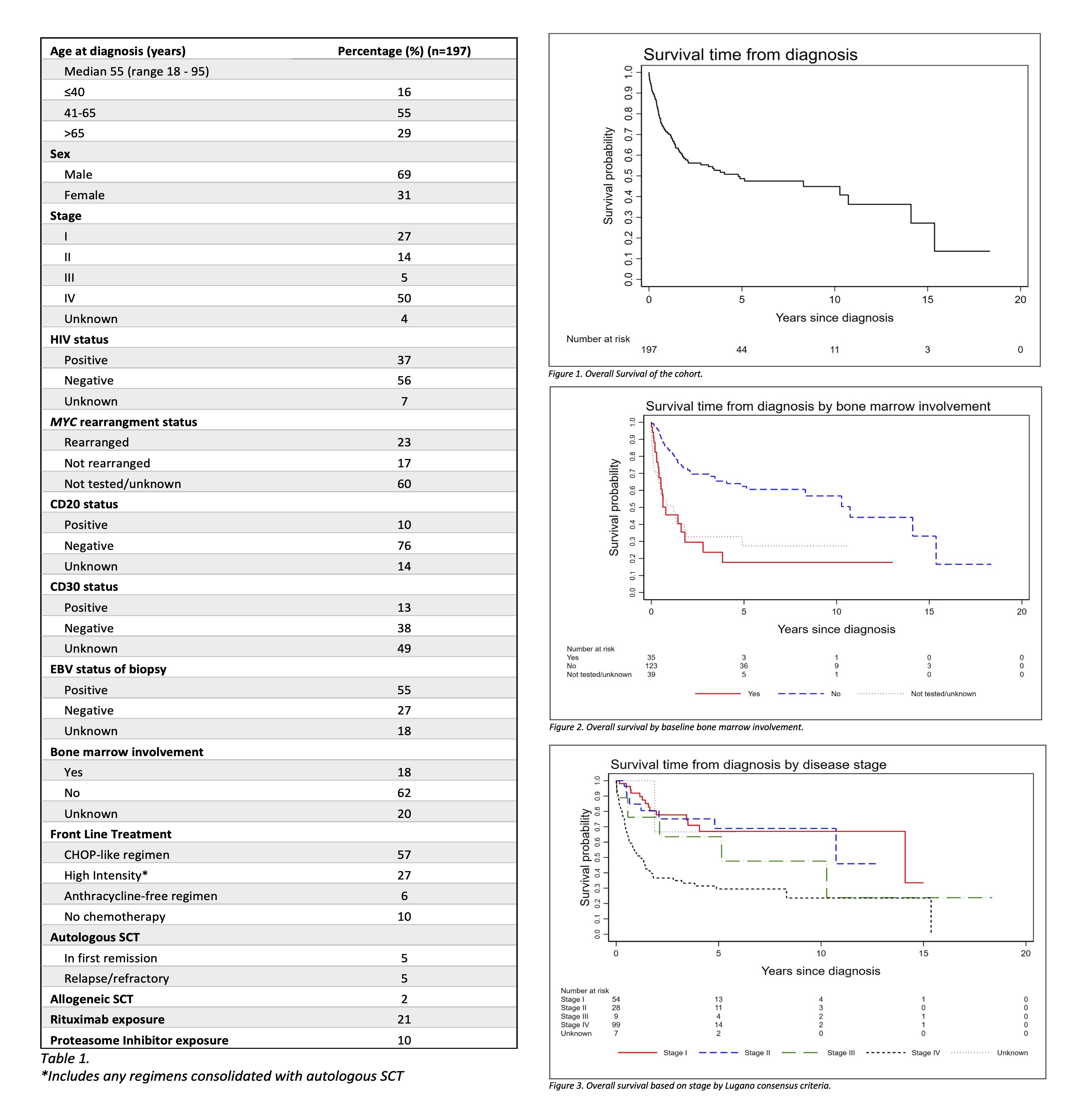