Background: Covalent BTK inhibitors (BTKi) have transformed the management of CLL/SLL. Despite the marked efficacy of covalent BTKi, treatment failure can occur through the development of resistance and discontinuation for adverse events. The activity of covalent BTK inhibitors is markedly reduced or absent in the presence of BTK cysteine binding site (C481) mutations. Moreover, these agents share pharmacologic liabilities (e.g. low oral bioavailability, short half-life) that may lead to suboptimal BTK target coverage, for example in rapidly proliferating tumors with high BTK protein turnover, ultimately manifesting as acquired resistance in some patients (pts). To address these limitations, LOXO-305, a highly selective, non-covalent BTKi that inhibits both wild type (WT) and C481-mutated BTK with equal low nM potency was developed. The aim of the BRUIN trial was to define the safety and early efficacy of LOXO-305 in pts with B-cell malignancies. Here we report these data in pts with previously treated CLL/SLL.

Methods: BRUIN is a multicenter phase 1/2 trial (NCT 03740529) enrolling pts with advanced B-cell malignancies who have received >2 prior therapies. Dose was escalated according to a standard 3+3 design with LOXO-305 dosed orally in 28-day cycles. The primary endpoint was MTD/RP2D identification. Intra-patient dose-escalation to previously cleared dose levels was permitted. Efficacy evaluable pts included all dosed pts who underwent their first response evaluation or discontinued therapy. Response was assessed every 8 weeks from cycle 3, and every 12 weeks from cycle 13 and was measured according to the iwCLL 2018 criteria, including PR with lymphocytosis (PR-L). Safety was assessed in all pts (CLL/SLL and NHL, n=186).

Results: As of 30 April 2020, 186 pts with B-cell malignancies (94 CLL/SLL, 38 MCL, 19 DLBCL, 17 WM, 6 FL, 5 MZL, and 7 Other [B-PLL and Richter’s transformation]) were treated on 7 dose levels (25mg to 300mg QD). Among the 94 pts with CLL/SLL, the median age was 69 (range 36-84) years and median number of prior therapies was 4 (range 1-10). 84% of CLL/SLL pts had received a prior BTKi, and 69% had received an anti-CD20 antibody, chemotherapy, and BTKi. In addition, 21% had received a PI3K inhibitor and 31% venetoclax. At enrollment, central molecular characterization for high-risk features in available samples revealed 17p deletion in 21% (13/63), TP53 mutation in 30% (27/91), and unmutated IGHV in 84% (51/61). LOXO-305 demonstrated high oral exposures, with doses ≥100mg QD exceeding the BTK IC90 for the entirety of the dosing interval. There were no DLTs or dose reductions. Consistent with LOXO-305’s selectivity, the only treatment-emergent adverse events regardless of attribution or grade seen in >10% of pts (n=186) were fatigue (n=29, 16%) and diarrhea (n=28, 15%). Responses were observed at the first dose level of 25mg QD. A RP2D of 200mg QD was selected for future studies. At the efficacy cutoff date, 88 CLL/SLL pts (94%) remained on therapy and 65 CLL/SLL pts were efficacy-evaluable (58 BTKi-treated, 7 BTKi-naïve). Median follow up time was 3 months (range 0.1-13) for all pts and 6.7 months for responders. The ORR was 57%, with 23 PRs, 14 PR-Ls, 26 SDs, 1 PD, and 1 NE (Figure). An additional 29 pts were ongoing and awaiting initial radiologic assessment. As has been observed with covalent BTK inhibitors, responses deepened over time; among pts with at least 6 months of follow-up (n=26), the ORR was 77%. Response rate was not influenced by the presence or absence of a pretreatment BTK C481 mutation, the reason for prior BTKi discontinuation (i.e. progression vs intolerance), or other classes of prior therapy received (including a covalent BTK and BCL2 inhibitor). Of the 37 responding pts, all except 2 remain on therapy (1 progressed and 1 achieved a PR and electively discontinued treatment to undergo an allogeneic stem cell transplant). The longest-followed responding patient has been on treatment for 13.5 months and is ongoing. Responding pts with BTK C481 mutations demonstrated corresponding decreases in mutant disease burden by ddPCR.

Conclusion: LOXO-305 demonstrated promising efficacy in heavily pretreated, poor-prognosis CLL/SLL pts following multiple prior lines of therapy including covalent BTKi and a BCL2 inhibitor. Importantly, the activity of LOXO-305 was not restricted to pts with BTK C481 mutations. LOXO-305 was well tolerated and exhibited a wide therapeutic index. 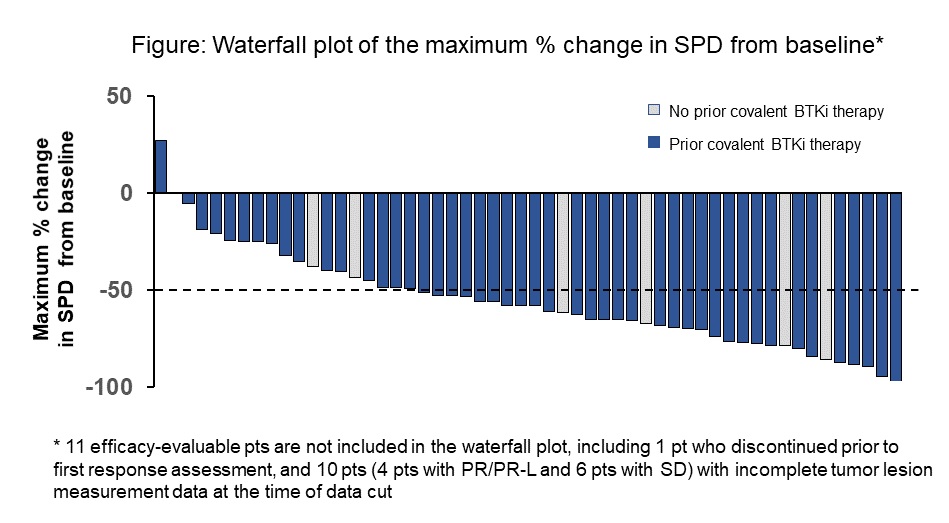