Introduction: Venous thromboembolism (VTE) is a significant treatment-associated complication after allogeneic hematopoietic cell transplantation (HCT), though optimal timing and implementation of thromboprophylaxis remains uncertain when weighing the concurrent risks of bleeding in this patient population. In this present study, we aim to: (1) determine the overall cumulative incidence of VTE up to one year post-allogeneic HCT, and (2) derive and internally validate a risk assessment model (RAM) for incident VTE after platelet engraftment to identify high-risk patients who may benefit from thromboprophylaxis after the first 30 days post-transplant.

Methods: We included all patients who underwent first allogeneic HCT from 2006 through 2015 at Fred Hutchinson Cancer Research Center. VTE was defined as radiology-confirmed pulmonary embolism (PE), lower extremity deep venous thrombosis (LE-DVT) or catheter-related DVT (CR-DVT). All outcomes were validated through individual chart review. For the purpose of risk modeling, the index date was defined as the 30th day after allogeneic HCT, at which point we estimated that approximately 90% of patients would have achieved platelet engraftment. The RAM was developed using a cause-specific Cox regression model with both univariable and multivariable analyses to identify variables with P-values <0.10 and were putative predictors of VTE based on prior studies and clinical judgement. Weights were attributed to each covariate and combined to form risk categories. Internal validation was performed by refitting a logistic regression model with the outcome of VTE events at 100 days to estimate the c-statistic.

Subsequent model testing using the binary outcome of VTE at 100 days demonstrated internal consistency with a resultant c-index of 0.68 (95% CI 0.63-0.75). Two sensitivity analyses were subsequently performed. The first analyzed the primary outcome of PE or LE-DVT (excluding CR-DVT); the overall VTE incidence was lower but the discrimination was similar (c-index 0.71, 95% CI 0.60-0.79). In the second, we excluded patients who did not reach adequate platelet engraftment by 30 days and demonstrated similar VTE incidence and discrimination (c-index 0.71, 95% CI 0.62-0.79). All models had excellent fit based on Hosmer-Lemeshow tests.

Conclusion: Though several prediction models exist to assess risk of VTE in patients with solid tumors and certain hematologic malignancies, prior models have not included allogeneic HCT patients. The HIGH-2-LOW model, if externally validated, can serve as a clinically meaningful predictive tool to identify high-risk allogeneic HCT patients who may benefit from thromboprophylaxis after engraftment. 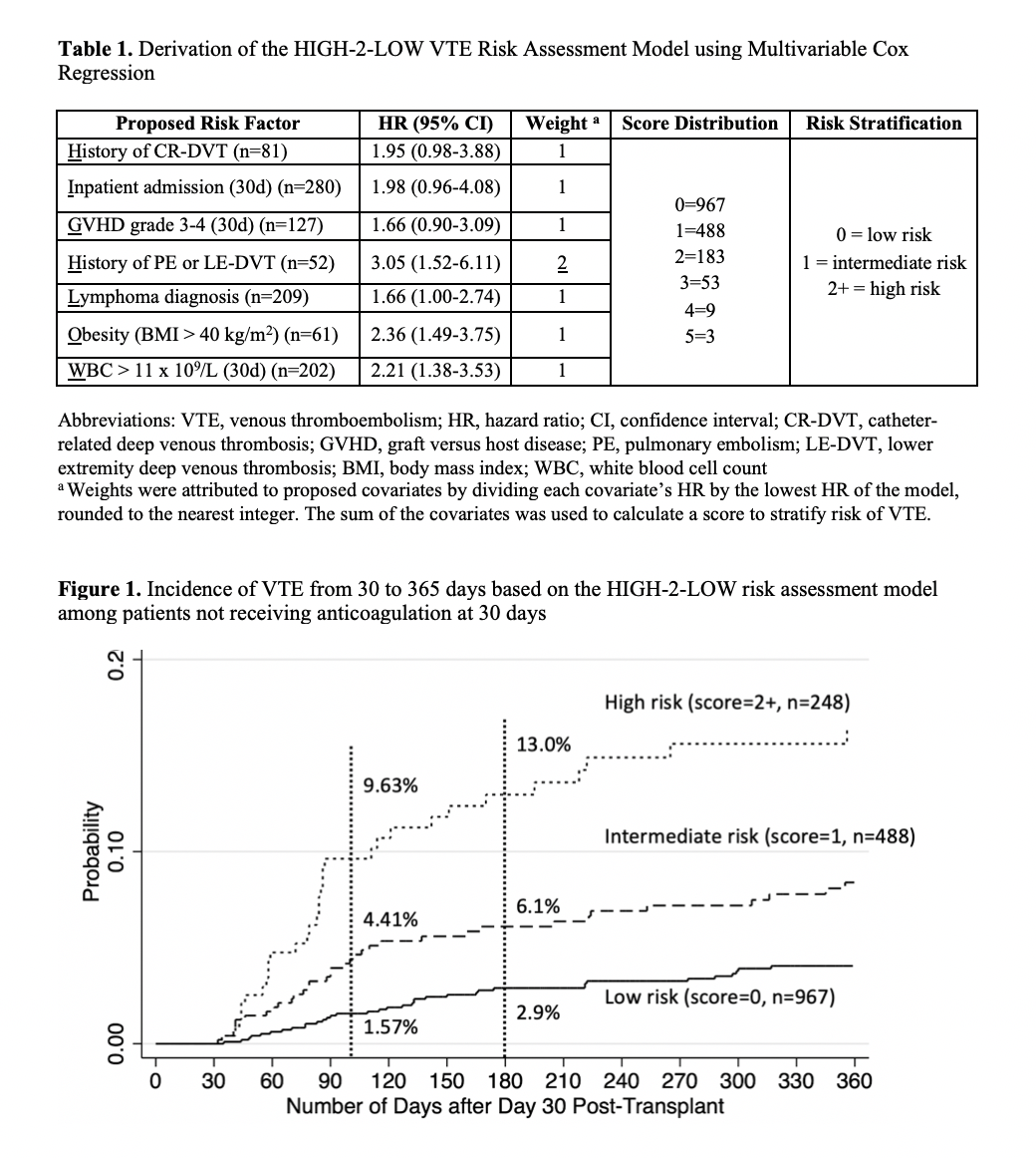