1786 A Phase IV, Multicenter, Open-Label Study of Emicizumab Prophylaxis in Persons with Hemophilia a with or without FVIII Inhibitors Undergoing Minor Surgical Procedures

Introduction: Emicizumab is a subcutaneously administered, bispecific, humanized monoclonal antibody that bridges factor (F)IXa and FX to restore the function of missing activated FVIII in persons with hemophilia A (PwHA). This study (NCT03361137) was designed to evaluate the safety and efficacy of emicizumab prophylaxis in PwHA with or without FVIII inhibitors undergoing minor surgical procedures without additional prophylaxis with bypassing agents (BPAs; for patients with FVIII inhibitors) or FVIII (for patients without FVIII inhibitors).

Methods: This Phase IV, multicenter, single-arm, open-label study enrolled PwHA of any age, with or without FVIII inhibitors, who were scheduled to undergo minor surgical procedures. Patients were required to have received a minimum of four loading doses of emicizumab (3mg/kg once weekly for 4 weeks) prior to surgical procedure; subsequent maintenance doses of emicizumab were 1.5mg/kg once weekly, 3mg/kg every 2 weeks, or 6mg/kg every 4 weeks. Patients were required to be adherent to emicizumab prophylaxis. Treatment with emicizumab was scheduled to continue for at least 1 month after surgery. No other prophylactic treatment with coagulation factor was permitted. Outcome measures included incidence of excessive bleeding intra-operatively and until discharge from surgery, use of BPAs or FVIII to control bleeding (intra- and post-operatively), incidence of adverse events (AEs), and the percentage of patients with complications requiring hospitalization or return to surgery. Excessive bleeding was defined as a rating of fair to poor on the hemostatic rating scale and translates to an intra- and/or post-operative blood loss of ≥25% over expectation for a patient without hemophilia prior to discharge from surgery. Patients were followed for 28 days following discharge from surgery.

Conclusions: In this study of mostly pediatric PwHA with and without FVIII inhibitors receiving emicizumab prophylaxis, minor surgeries were safely performed. The majority of surgeries were performed without additional prophylactic coagulation factor, however the small sample size should be considered here. There were no serious AEs, TEs, TMAs, or deaths. These findings are consistent with results from previous studies of patients undergoing minor surgery while receiving emicizumab prophylaxis. 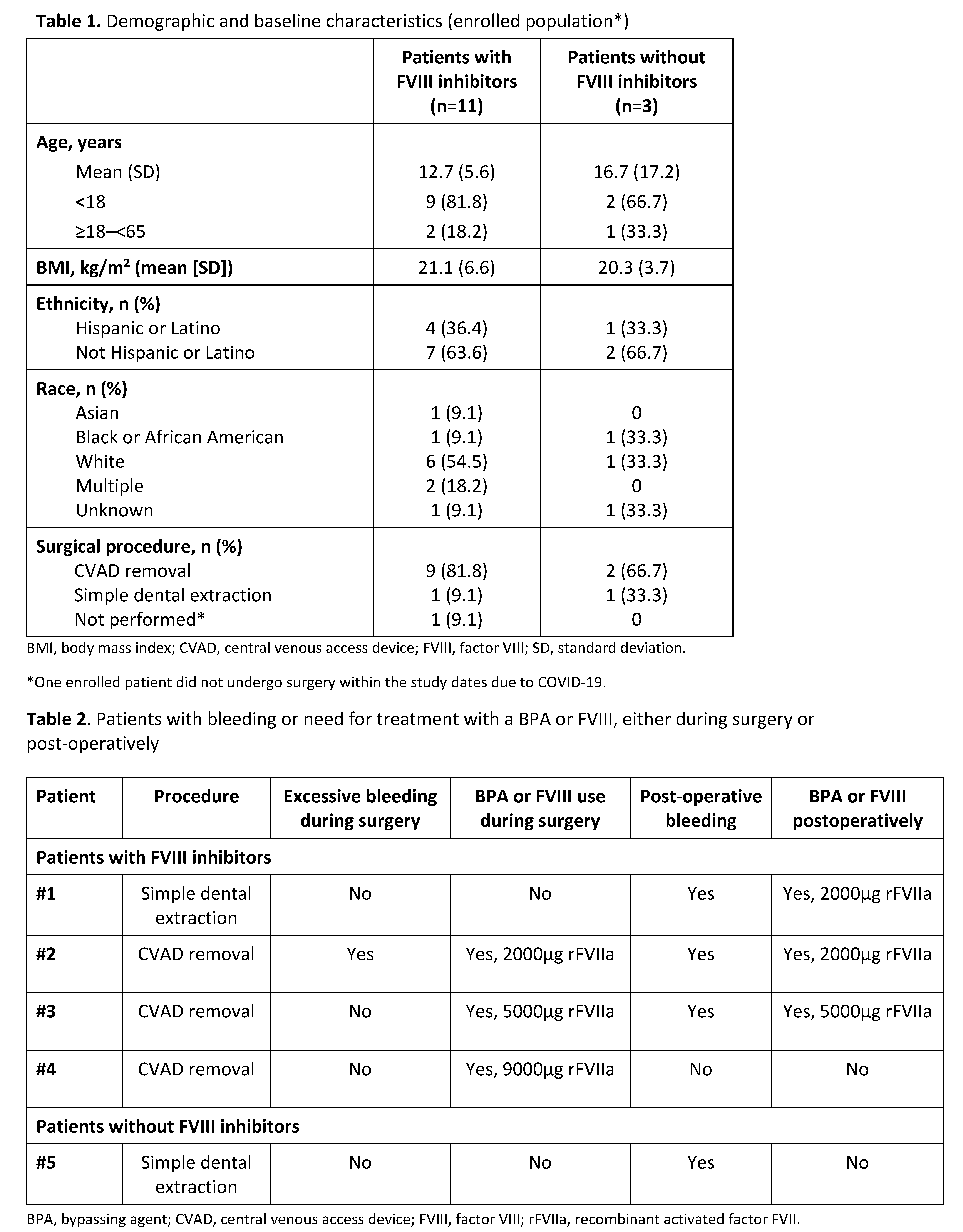