371 Quality of Life after Diagnosis in Survivors of Aggressive Lymphomas

Background: Aggressive lymphomas are potentially curable; however, long-term effects of treatment and the disease may adversely affect patients’ quality of life (QoL). We investigated QoL at baseline, and up to nine years after diagnosis in survivors of aggressive lymphomas.

We assessed QoL using the Functional Assessment of Cancer Therapy-General (FACT-G) scale at baseline enrollment, and 1, 2, 3, 6, and 9 years post-diagnosis. FACT-G measures well-being (WB) in four domains—physical (PWB), social/family (SFWB), emotional (EWB), and functional (FWB), which are added to create a total (TOT) score. Those who completed <80% of FACT-G questions at any given time point were excluded. "Survivor" was defined as alive at 1, 2, 3, 6, and 9 year follow-up with no active disease or treatment within six months of a given time point. Because patients could be enrolled at any time within the first 9 months from diagnosis, the timing of initial QoL assessment was variable with respect to the start of lymphoma treatment. We estimated longitudinal change in QoL using mixed models incorporating scores from all available time points. The minimally important difference (MID) of 5 points for TOT and 2 points for each of the domains was used to determine clinical significance. Scores were compared to United States (US) general population normative data. All statistical analyses were performed using SAS (v 9.4).

QoL increased from baseline enrollment; the largest increase was seen from baseline to 1 year after diagnosis with a statistically and clinically significant mean TOT score difference of 6.7 points. This mean increase in TOT scores sustained over time with an increase of 7.8 points above baseline at 9 years after diagnosis. At baseline, PWB, EWB, and FWB scores were significantly lower in patients with aggressive lymphomas compared to the US general population, and SFWB scores were significantly higher (all p <0.01); however, only SFWB and EWB score differences were clinically significant as defined by MID. SFWB showed only a mild decline from baseline over the course of 9 years. Despite this, all SFWB scores were statistically and clinically significantly higher than the US general population at 1, 2, 3, 6, and 9 years after diagnosis (all p <0.01 and MID >2). Patients with aggressive lymphomas TOT scores at baseline did not differ from the US general population, while TOT scores at 1, 2, 3, 6, and 9 years post-diagnosis were statistically and clinically significantly higher. Overall, the results in the pre-treatment QoL subset were consistent with the cohort as a whole. 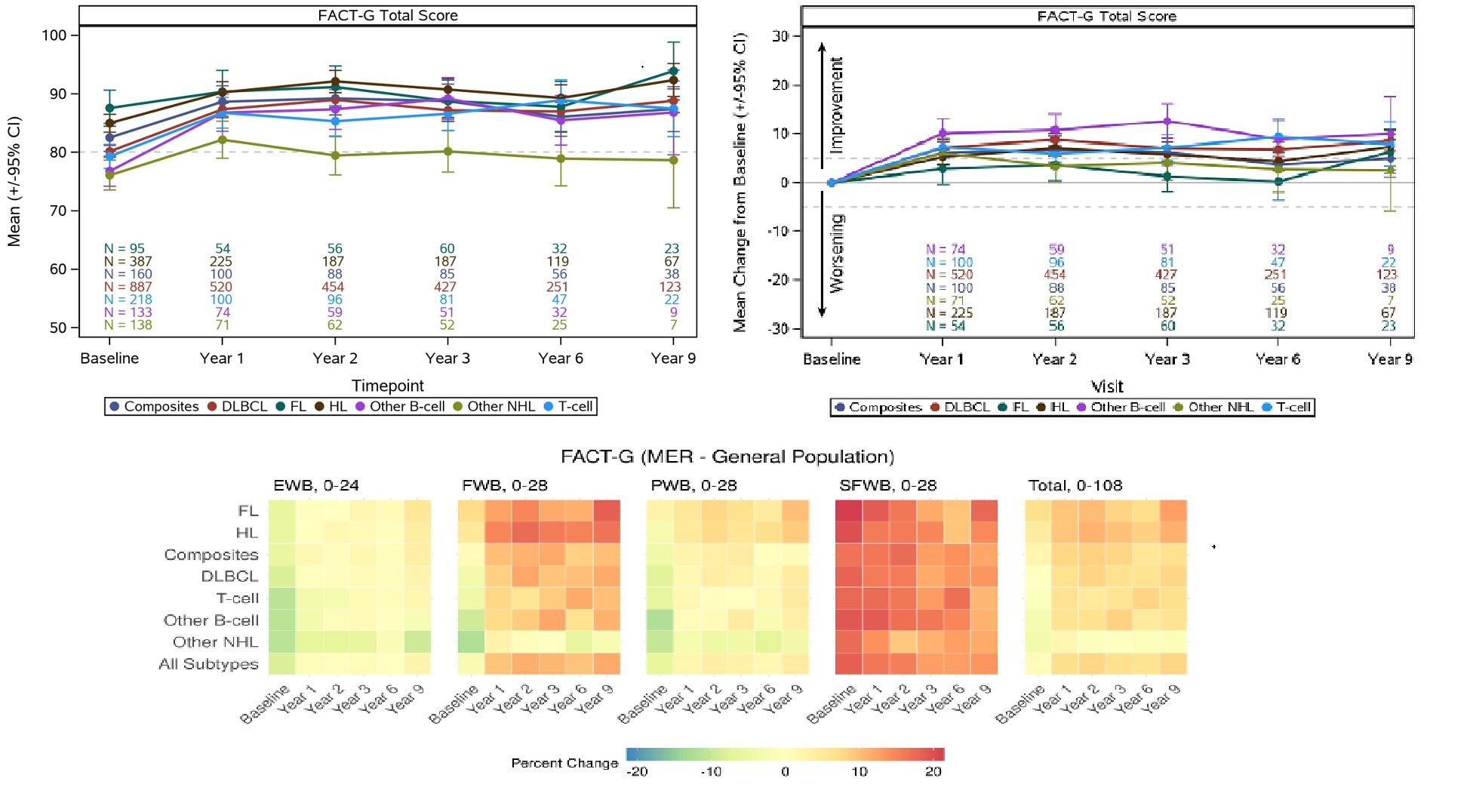