The mesothelin (MSLN) protein is overexpressed in many solid tumors and is considered a viable immunotherapeutic target. We recently demonstrated that MSLN is aberrantly expressed on the blast surface in approximately 1/3 of AML cases and lacks expression in normal hematopoiesis, making it an attractive target in AML. While the exact function of MLSN is unknown, multiple studies, including its recently described role in the development of surgical adhesions, implicate it in cell adhesion in both healthy and malignant cells. We hypothesized that MLSN expression in AML may be involved in extramedulllary disease (EMD). We correlated MLSN transcription expression with EMD status and utilized xenograft models to evaluate MSLN’s role in AML in vivo.

We evaluated the role of MLSN in EMD and its potential function in engraftment in vivo with xenograft models. A higher incidence of EMD was detected in MSLN+ xenografts; 90% (9/10) of Nomo-1 xenografts developed abdominal myeloid sarcomas compared to 30% of Nomo-1KO-MSLN (p<0.005; Fig 1A). The MSLN+ PDX showed EMD and associated renal sarcomas and enlargement of the kidneys (Fig 1B). Evaluation of MSLN+ CDX demonstrated more rapid and higher levels of tumor burden compared to their MSLN- counterparts. At 6 weeks post injection, tumor load of Nomo-1 CDX was 3-fold higher than Nomo-1KO-MSLN (p<0.005; Fig 1C,D) and was 8-fold higher in Kasumi-1-MSLN+ compared to parental Kasumi-1 (p<0.05; Fig 1E,F).

Our findings demonstrate that MSLN is highly implicated in EMD and our xenograft studies further support the hypothesis that MSLN may be involved in cell adhesion and establishing sites of disease. EMD can be very challenging to treat, and in the setting of recurrence often indicates incurable disease, thus novel therapeutic strategies for this group of patients are urgently needed. Our findings support additional studies of how MSLN may be functionally implicated in the development of EMD as well as clinical trials that evaluate MSLN targeting in AML. 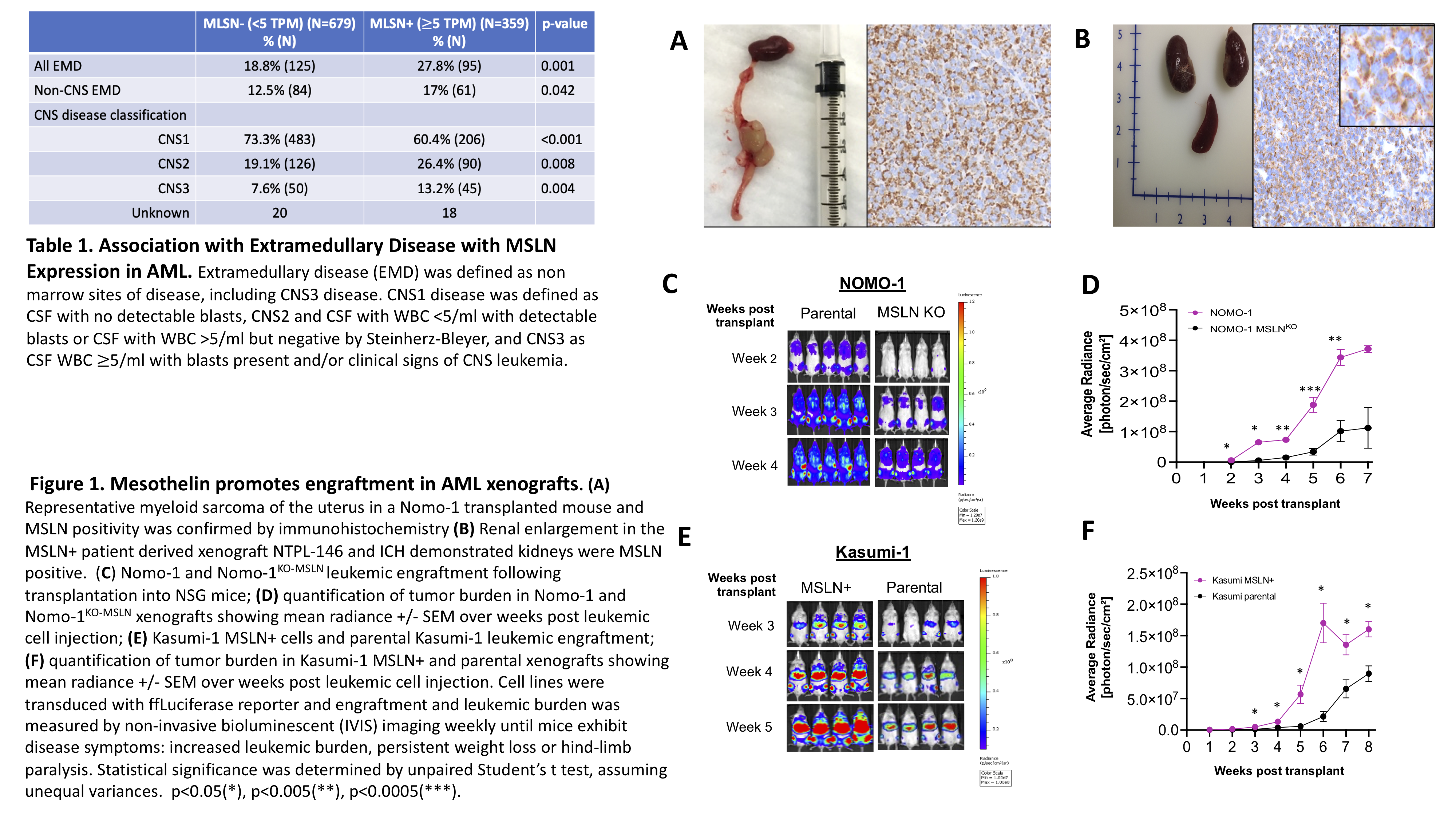