1219 Neoantigens in Patients with De Novo Follicular Lymphoma: Results from the PRIMA Study

Introduction: Follicular lymphoma (FL) is a slow growing lymphatic cancer characterized by translocations in and overexpression of BCL-2, which inhibits apoptosis. This pathogenesis may generate neoantigens (NAs) that are recognizable by T-cells as part of a patients’ immune surveillance and are unique to specific FL mutations. Tumor mutation burden (TMB), and NA prevalence and prognostic nature, have previously been characterized for diffuse large B-cell lymphoma (DLBCL), identifying that TMB correlated with NA burden (NAB). While TMB did not correlate with outcomes, the presence of a NA, especially BCL2 NA, correlated with outcomes in de novo DLBCL. In addition, the majority of patients were predicted to have ≥1 NA (Paulson, EHA 2019). However, to date, the prevalence of NAs in FL, and their association with clinical outcomes, have not been characterized. The aim of our study was to characterize NA prevalence and evaluate the prognostic value of NA biomarkers, assessed by a targeted, comprehensive genomic profiling (CGP) platform, on progression-free survival (PFS) for patients with de novo FL.

Methods: CGP data on 465 genes were available from patients with FL who provided biopsy samples at screening for the Phase III PRIMA trial (NCT00140582; intent-to-treat [ITT] population =1018; patients received rituximab [R] maintenance vs observation after response to initial first-line treatment with R-CVP [cyclophosphamide, vincristine, prednisone], R-CHOP [cyclophosphamide, doxorubicin, vincristine, prednisone] or R-FCM [fludarabine, cyclophosphamide, mitoxantrone]). CGP was used to calculate TMB, HLA type (OptiType) and NA prediction (NetMHCpan). The prevalence of NAs at time of screening was analyzed by the number and proportion of patients. The prognostic value of NAs were evaluated against the Cox Proportional Hazards null model for PFS including terms for treatment, country and response to induction treatment. The Akaike Information Criterion (AIC), a likelihood ratio test (LRT) p-value vs the null when including an additional NA term and its associated hazard ratio (95% CI), were calculated. A visualization of the genetic mutational landscape was generated using dimension reduction methods.

Conclusions: We observed that similarly to de novo DLBCL, TMB and NAB were also correlated in patients with de novo FL. While NAB was associated with clinical outcomes in de novo DLBCL, we did not observe these associations in FL. In patients with de novo FL,who discontinued R after initial treatment response, the absence of EZH2 predicted neoantigens were associated with PFS. This is consistent with results on EZH2 mutation status reported by Huet, et al.(Blood Cancer J 2017). A caveat to this hypothesis generating analysis is the small number of PFS events in the EZH2 neoantigen group. These insights may inform future personalized strategies in FL. 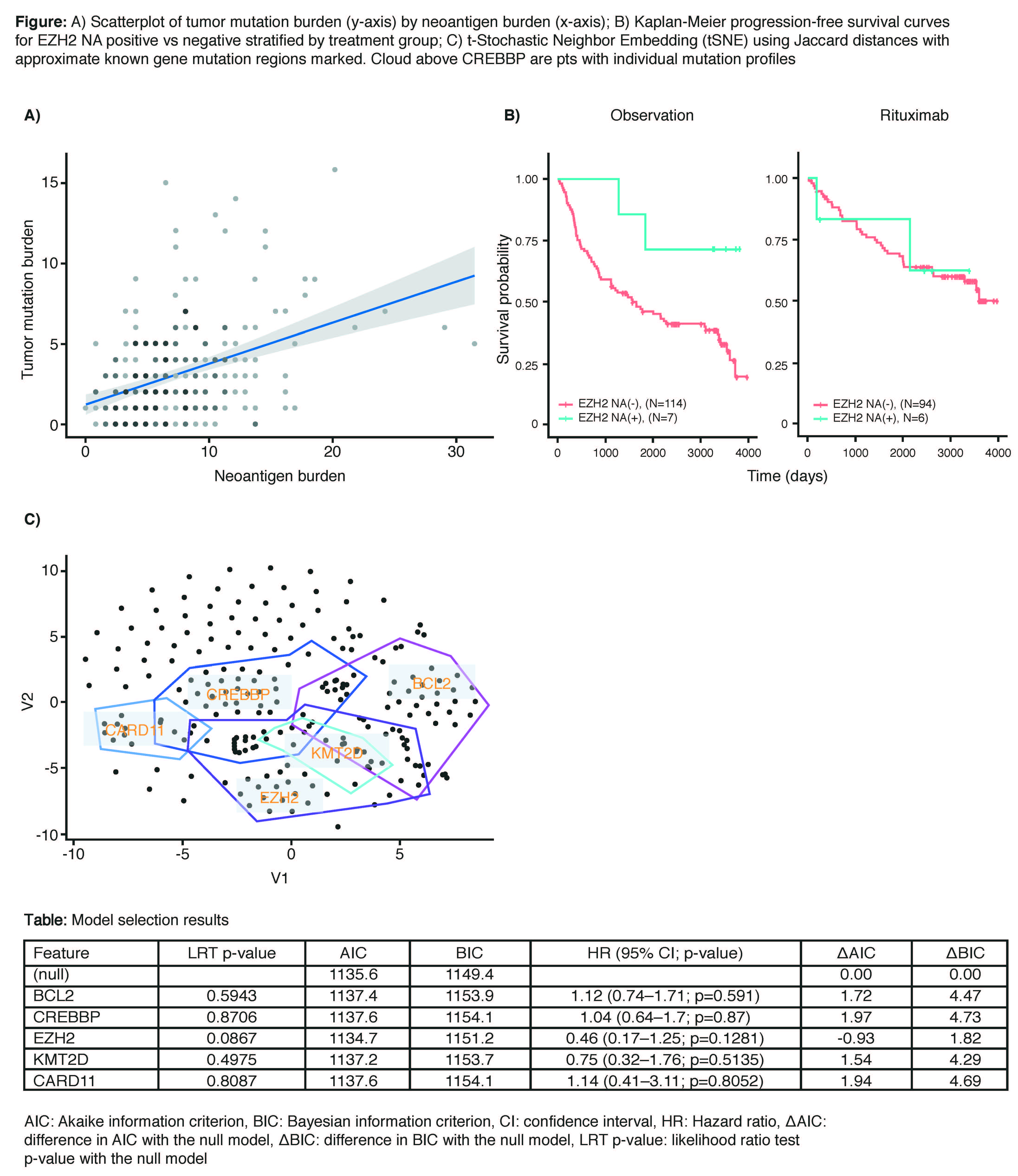