Background: Iron deficiency (ID) and ID anemia (IDA) are common in pregnancy. ID, even without anemia is associated with poor outcomes including maternal and childhood neurocognitive dysfunction, low birth weight, prematurity, and childhood anemia. In spite of this, major obstetrical guidelines do not recommend routine screening for ID in pregnancy. To date, the rates of ferritin testing among these women have not been reported.

Aims: The primary objective was to determine the point prevalence of ferritin testing over a five-year period among pregnant women with prenatal testing at outpatient private laboratories in Ontario, Canada. Secondary objectives were to determine the point prevalence and severity of ID, and to identify clinical and demographic variables that influence the likelihood of ID screening in this population.

Methods: We conducted a retrospective cohort study of pregnant women ages 13-54 years in Ontario, Canada. Out-patient laboratory data was provided by Dynacare, a large laboratory company representing approximately 30% of all non-hospital outpatient testing in the province. Tests ordered between January, 2013 and June, 2018 were retrieved. A pregnancy taken to term was inferred from the co-occurrence of a Rubella test and a blood group/Rh test (the “index date”) followed by a Group B Streptococcus (GBS) vaginal swab ≥ 4 months and ≤ 8 months later (Figure 1). The duration of pregnancy was defined as 4 weeks prior to and 32 weeks following the index date. Multiple pregnancies per patient were included, provided a minimum of 365 days elapsed between pregnancies. Women were excluded if ordering providers were not physicians, nurse practitioners or midwives. Normal iron stores, mild ID, moderate ID and severe ID were defined as ferritin levels of 45-150 µg/L, 30-44.9 µg/L, 15-29.9 µg/L and <15 µg/L, respectively. Annual household income was estimated using the patient’s postal code and Statistics Canada census data. Research ethics board approval was obtained. Dynacare was not involved in the design of the study nor in its analysis.

Conclusion: ID affects more than half of pregnancies in Ontario, with 1 in 4 pregnancies complicated by severe ID. Despite this, 1 in 3 pregnant women are not screened with a ferritin. The vast majority of ID screening occurs in the first trimester, when the risk of ID is lowest. Anemia affected 8% of pregnancies, yet the underlying etiology was rarely investigated unless severe. Annual household income was significantly associated with the odds of a ferritin check. These important gap in care should be addressed by revising obstetrical guidelines to recommend routine ferritin testing in pregnancy. 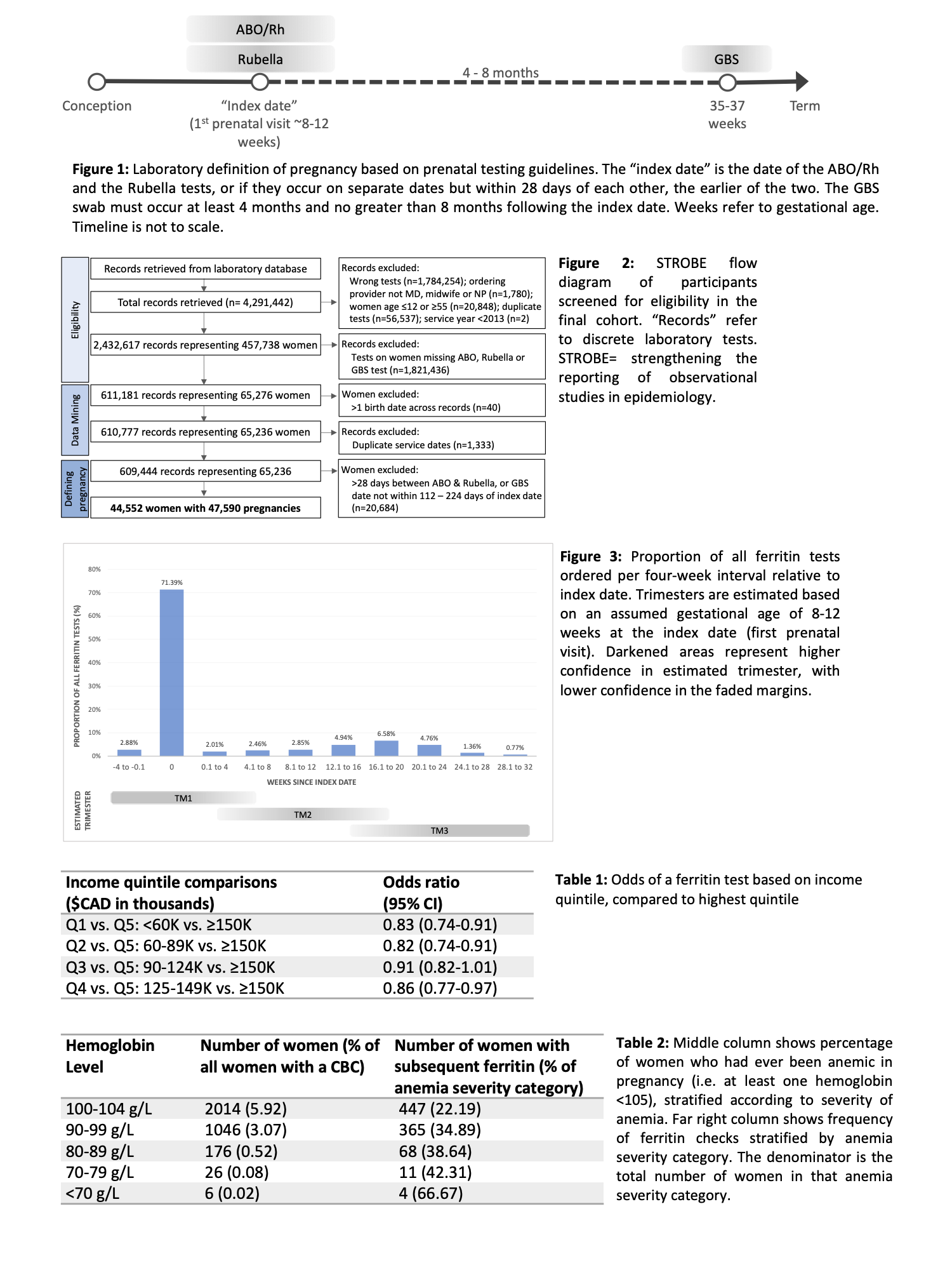