L-asparaginase (ASNase) is a microbial enzyme and a chemotherapeutic agent that has been a standard component of multi-agent chemotherapy for the treatment of acute lymphoblastic leukemia (ALL). Eryaspase, ASNase encapsulated in red blood cells, is being developed with an improved pharmacokinetic profile compared to some other ASNase products. The purpose of the present analysis was to describe the population pharmacokinetics (Pop PK) of eryaspase and sources of variability in two patient populations – ALL or pancreatic adenocarcinoma (PAC).

Eryaspase was administered intravenously at doses of 50, 100, and 150 U/kg to patients enrolled in Phase 1-3 clinical trials in combination with chemotherapy. Either serial or sparse pharmacokinetic sampling was performed in each study. A Pop PK model was fit to the data using Nonlinear Mixed Effects Modeling (NONMEM®) software, and included an assessment of covariates, e.g., demography, disease type, formulation, and immunogenicity. The adequacy of the final Pop PK model and parameter estimates was investigated with a visual predictive check (VPC) and non-parametric bootstrap analysis. Using the final Pop PK model, a simulation was performed for eryaspase 100 U/kg every 2 weeks and included a target trough reference ASNase level of 100 U/L.

The Pop PK analysis included 162 patients (94 ALL and 68 PAC) with median age of 56.5 years (range of 2-84 years). Eryaspase concentration-time data were best described by a one compartment model with first order elimination. Population clearance and volume of distribution were 0.29 L/day and 6.12 L, respectively. That equates to a terminal half-life of approximately 15 days. Both clearance and volume of distribution were found to increase with increasing body weight. No other covariate tested was found to influence eryaspase pharmacokinetics, including patient age and gender, patient population (ALL vs PAC), and formulation (native vs recombinant ASNase). VPC showed the final model well captured the data; furthermore, the final model parameters and bootstrap results were in accordance. The effect of positive presence of neutralizing antibodies on eryaspase clearance was inconclusive because of variability within and across studies. The figure below displays the median (solid line) and 95% prediction interval (blue shaded region) of simulated ASNase concentrations with a reference line of 100 U/L. The simulation shows that approximately 95% of patients would exceed the target trough level of 100 U/L following the first and subsequent infusions following administration of 100 U/kg every 2 weeks.

In conclusion, the Pop PK analysis provided valuable information in the characterization of eryaspase and factors that influence its variability. As expected for an RBC-type product, the clearance was low, and the volume of distribution was consistent with blood volume. Terminal phase t1/2 was approximately 15 days, and body weight was a significant covariate for both clearance and volume of distribution. Based on simulation, an eryaspase dosing regimen of 100 U/kg every 2 weeks would provide trough ASNase activity levels above 100 U/L for approximately 95% of patients. Eryaspase is currently being investigated in ALL patients with hypersensitivity reactions, as well as a phase 3 clinical study in PAC (Trybeca-1) and a phase 2 study in Triple Negative Breast Cancer (Trybeca-2). 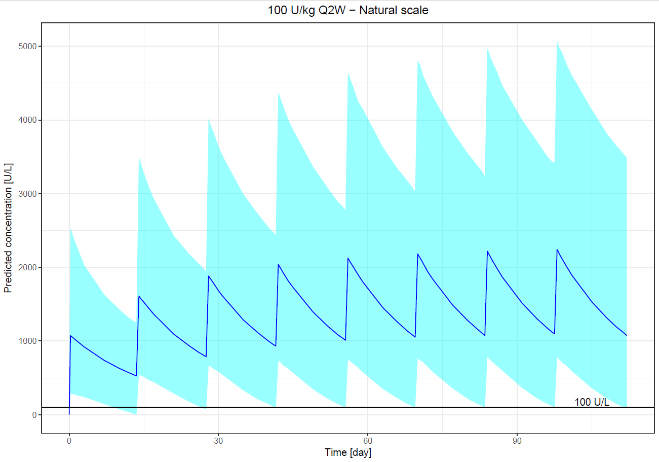