Introduction: Disease relapse after allogeneic hematopoietic cell transplantation (HCT) is the main cause for an unsuccessful transplant outcome. The prognosis is generally poor and there is no consensus regarding optimal therapy to restore disease control. We retrospectively analyzed 121 patients with hemato-lymphoid malignancies who had disease relapse after a first HCT (HCT1) and received a subsequent allograft (HCT2) or a donor lymphocyte infusion (DLI). The goal of the analyses was to better understand which clinical features was associated with improved outcomes, and to help define the risk-benefit of these two interventions.

Results: The HCT1 baseline characteristics were comparable for both groups (Table1). The median time interval from HCT1 to disease relapse was 8 months (range 1-87). Patients who had disease relapse within 6 months of HCT1 had withdrawal of immune suppression (IS) medication whereas most patients with disease relapse beyond 6 months already had had IS drugs discontinued. DLI was the treatment choice for CML, CLL and plasma cell neoplasms, or for a low level of disease relapse/progression. In the HCT2 cohort, the median age was 56 (range 31-70) and 17 (61%) patients were returned to CR with chemotherapy prior to HCT2. Three patients (11%) received a myeloablative regimen and 23 (82%) received a reduced intensity regimen (RIC). The graft source was mobilized peripheral blood in 26 patients (92%) and 20 (71%) had a different donor at HCT2. Karnofsky performance status was >90% in 11 (39%) patients at HCT2. In the DLI cohort, the median age was 60 (range 22-77) and 48 (52%) were returned to CR prior to the first DLI. Patients received a median of one DLI (range 1-4). The median CD3+ T cell dose was 1.0 X107CD3+/kg (range 0.5-30). Karnofsky performance status was >90% in 56 (67%) patients at time of DLI. Both interventions were well tolerated and the 1-year non-relapse mortality (NRM) was 21% (n=6) for HCT2 and 12% (n=11) for DLI. Acute graft-versus-host disease (aGVHD), grades 2-4, occurred in 39% and 24% of the patients who received HCT2 and DLI. The 3-year cumulative incidence of extensive chronic GVHD was 25% for HCT2 and 23% for DLI.

Within the limitations of the small number of patients only one factor in univariate analysis was associated with an improved OS for both HCT2 and DLI and this was attainment of complete donor CD3+ T cell chimerism (>95% donor type) after either intervention. The 3-year OS for patients who attained full donor chimerism was 68% and 66% for HCT2 and DLI, respectively, compared to 33% and 24% for these groups if full donor chimerism was not achieved. The KPS at the time of DLI was significantly associated with improved OS: the median OS was 2, 8 and 19 months when KPS was <70%, 70-80% and 90-100% respectively (p=0.0026). The impact of remission duration after HCT1 associated with OS for DLI but not HCT2. Relapse within 6 months after HCT1 portended a poor prognosis for the DLI group with a median OS of 6-months compared to 19-months if relapse occurred beyond 6-months of HCT1.

Conclusion: HCT2 and DLI can both offer long-term disease control for disease relapse after HCT1 albeit only a minority of patients receive these interventions. In our analysis, HCT2 and DLI were well tolerated and the risks of NRM and GVHD appear similar to HCT1. Long-term OS for HCT2 is achieved for about half of the patients when using a RIC and when the patient is returned to CR prior to the intervention. For DLI, a higher performance status and a longer remission after HCT1 were both associated with improved long-term survival. Conditions that enable attainment of full donor chimerism are important to maximize graft-versus-tumor effect for both HCT2 and DLI. 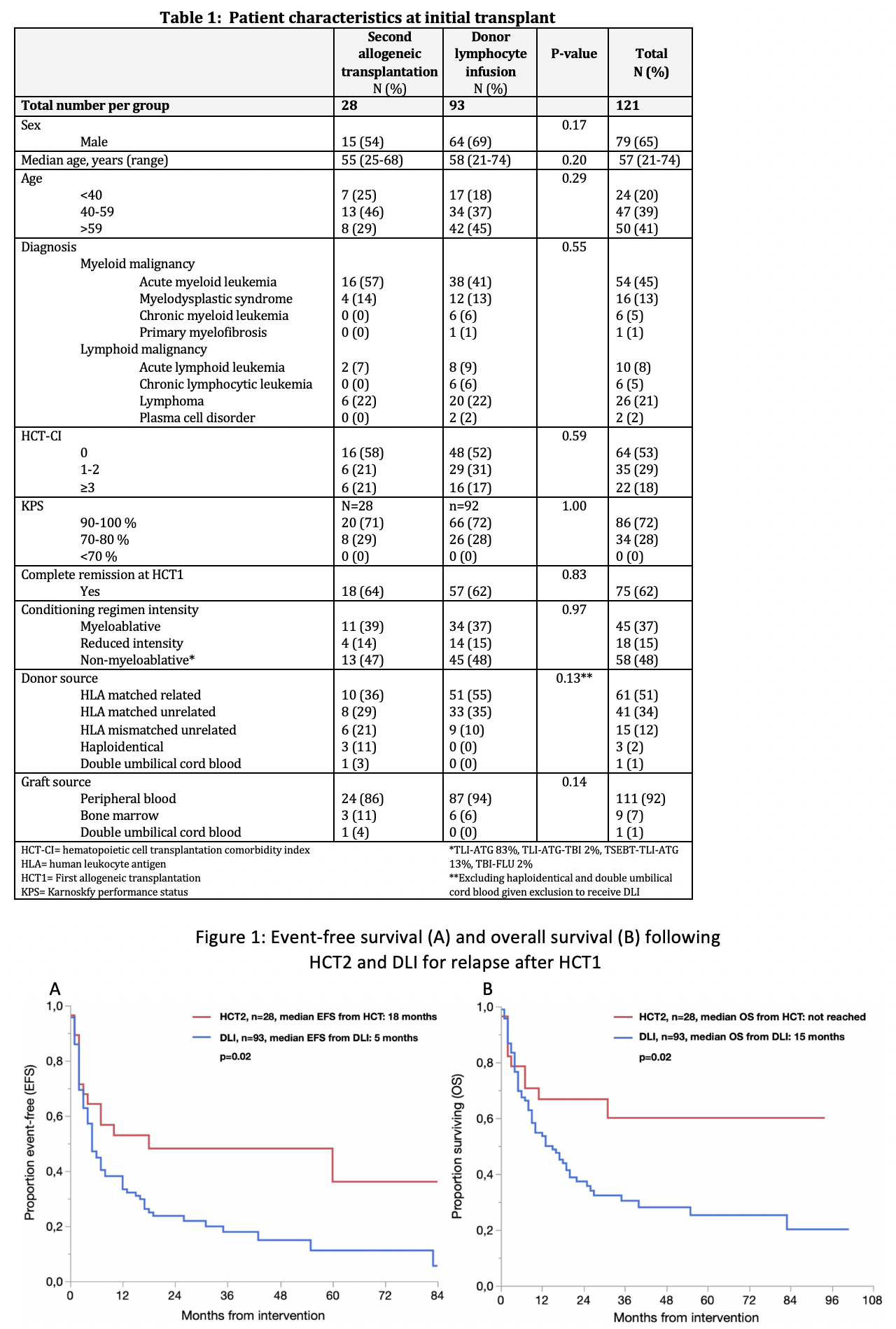