1642 Disparities in Insurance Status in Patients with Multiple Myeloma: A SEER 2007-2016 Survival Analysis

Background: Multiple myeloma (MM) accounts for 10% of all hematological malignancies. This has prompted the introduction of significant therapeutic advancements, such as novel agents and autologous stem cell transplants, resulting in drastic improvement in the disease prognosis. The National Cancer Institute reported a 49% improvement in 5-year relative survival rates of MM from 2005 to 2011 compared to just 27% from 1987 to 1989. However, existing literature has identified socioeconomic barriers in receiving advanced treatments. This study evaluates the association between insurance status and survival in patients with multiple myeloma.

Study Design and Methods: This was a non-concurrent cohort study analyzing data from the 2007-2016 Surveillance, Epidemiology, and End Results (SEER) Program database. Patients with a primary malignancy of multiple myeloma during 2007-2016 were included. Patients with missing data on any of the key variables were excluded from these analyses. Insurance status was categorized as uninsured, Medicaid, private insurance, and other insurance. Survival was measured at one and five years post diagnosis. The covariates included in the analysis were age, sex, race, ethnicity, marital status, and residence. Comparison of baseline characteristics were assessed using Chi-squared tests. Kaplan-Meier method and log-rank test were used to compare the groups survival. Unadjusted and adjusted Cox regression models were used to calculate hazard ratios (HR) and corresponding 95% confidence intervals (CI).

Results: From 2007-2016, there were 41,846 patients with a primary malignancy of multiple myeloma extracted from the SEER database (Table 1). Those with private insurance had a higher proportion of participants that identified as married (65.5%), resided in metropolitan cities (90.1%), and identified as white (76%) and non-Hispanic (90.8%). The uninsured group had the highest proportion of Black participants compared to other insurance groups (37.4%).

Unadjusted and adjusted Cox regression for one- and five-year survival in varying insurance groups using univariate and multivariate models are presented in Table 2. As seen on Figure 1 and Figure 2, Medicaid insurance holders had the highest hazard of mortality at one- and five-year survival. After adjusting for age, sex, race, ethnicity, marital status, and area of residence, the likelihood of five-year survival was significantly lower in those respondents with Medicaid (adjusted (adj) HR, 1.44; 95% CI 1.36-1.53), when compared with private insurance holders. Further, those who were uninsured had a 26% increased hazard of mortality than those with private insurance (95% CI 1.04-1.53). Married respondents had an increased likelihood at five-year survival (adj HR 1.18, 95% CI 1.13-1.122), when compared with unmarried patients. Black respondents had an increased likelihood of survival at both one- and five-years, when compared with whites (adj HR 0.92, 95% CI 0.88-0.97). The mortality hazard increased with age in multiple myeloma patients over the age of eighty having a 3.9-fold increased mortality hazard (95% CI 3.58-4.28) in comparison to patient 18-49 years old.

Conclusion: This study reveals that insurance status plays a significant role in the overall survival for patients with a primary diagnosis of multiple myeloma. Compared to privately insured MM patients, adults with no insurance coverage, Medicaid, or unspecified insurance appear to have higher hazard of mortality over one and five years. As treatment modalities for MM continue to advance, the insurance status of a patient should not hinder their ability to receive the most effective and timely therapies, as early exposure and induction are critical factors in improving the overall survival rate. Future research must focus on the cause of these disparities facing MM patients, as every individual, regardless of insurance status, should be offered the best therapies and equal treatment access. 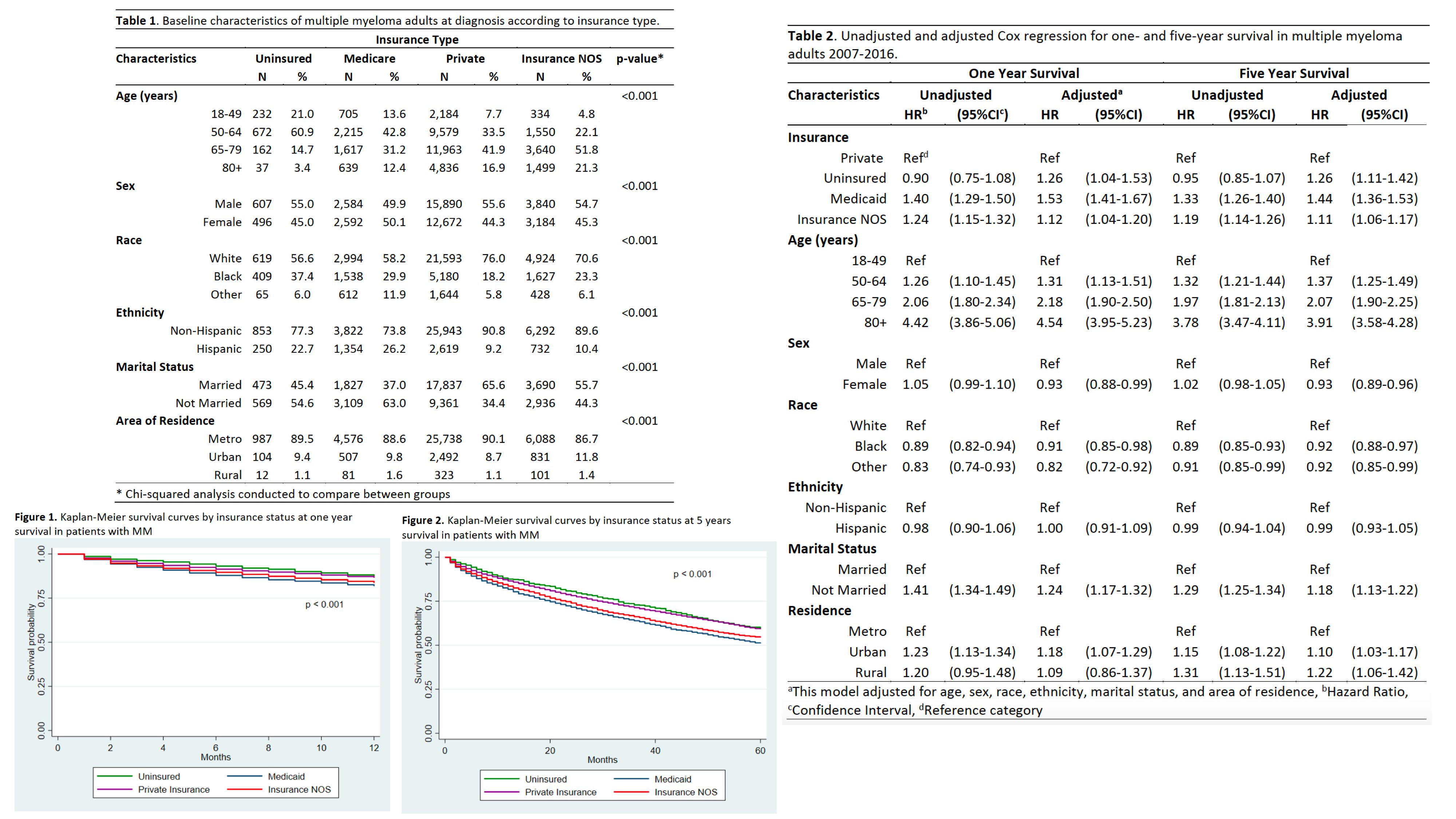