1377 Real-Life-Setting Effectiveness of Ixazomib in Combination with Lenalidomide and Dexamethasone in Relapsed or Refractory Multiple Myeloma: The Remix Study

Ixazomib (IXA) is an orally-administered proteasome inhibitor approved in Europe in November 2016 for relapsed and/or refractory multiple myeloma (RRMM). It became available in France in May 2017 via a compassionate use program (CUP) and from October 2018 via the classical market access (non-CUP).

In addition to pivotal clinical trials, real-world evidence (RWE) is required to evaluate effectiveness and safety in clinical routine practices. A non-interventional study, has been conducting in France to evaluate IXA use in combination with lenalidomide and dexamethasone (IRD) in real life.

REMIX is a non-interventional, multicentric study to assess IRD effectiveness and safety, conducted in 59 sites (public and private) in patients with RRMM. IRD was initiated in second line or more during the CUP and afterwards. After inclusion, patients were assessed every 3 months (mo) during 24 mo then every 6 mo as per standard practice.

This interim analysis assessed IRD effectiveness (median Progression Free Survival (mPFS), 12 and 24-mo overall survival (OS) rates and tolerance in the CUP patients initiating IXA concomitantly to RD (patients who started lenalidomide more than 6 weeks before IXA were excluded). The analysis was conducted globally and per subgroups (age, number of lines of treatment, frailty as defined by Facon T & al.in Leukemia 2020). The CUP-patient median study follow-up was 17.4 mo for this interim analysis.

Few RWE data have been published for IXA use in Europe. In this first interim analysis, estimated mPFS is consistent with MM1 results or data reported in MM1 study (19,2 mo vs 20.6 mo) even though CUP patients in REMIX were globally elder, frailer and more frequently treated in advanced lines (24% of L4+ in REMIX vs 11% of L4 in MM1). Reported adverse events were in line with known safety IXA profile. 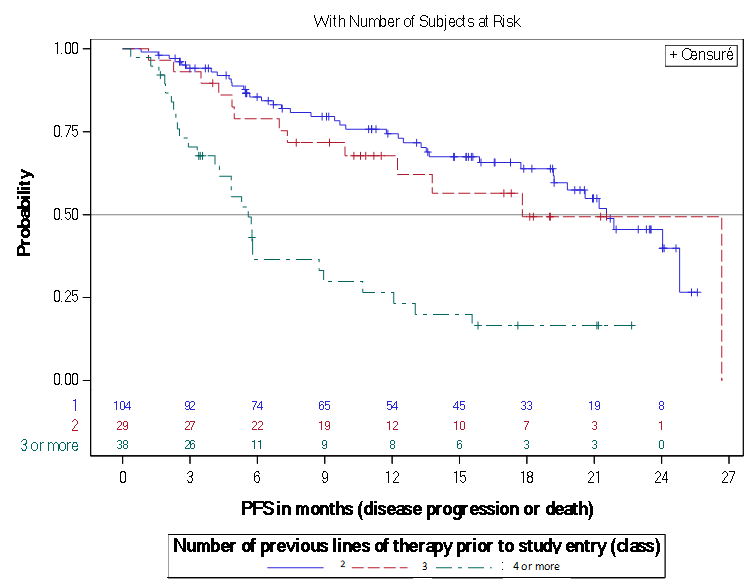