Background: Treatment options, together with guidelines, for pts with CLL have evolved and expanded with the introduction of novel agents. The informCLLTM registry is the largest US-based prospective, observational registry of pts who received treatment for CLL/SLL in the post-novel agent era. This prospective real-world registry is uniquely positioned to examine the impact of the dynamic treatment landscape, treatment practices, and outcomes in routine clinical setting. Here we present baseline characteristics, prognostic biomarker testing, and treatment patterns for the fully enrolled pt population.

Methods: From Oct 2015 to June 2019, informCLL (PCYC-1134; NCT02582879) enrolled eligible pts with CLL/SLL who were ≥18 years (y), initiated FDA-approved treatment for CLL/SLL within ±45 days of enrollment and provided consent. Pts were classified into 5 groups based on treatment received at enrollment (index): ibrutinib (single agent or combination), chemoimmunotherapy (CIT), chemotherapy (CT), immunotherapy (IT), and other novel agents. Descriptive analyses are presented.

Table 1 shows the distribution of pts receiving different treatments on study. Across lines of therapy, the most common treatment was ibrutinib (46%); the majority (87%) started ibrutinib treatment at the recommended daily dose of 420 mg, and pts continuing ibrutinib therapy largely did not require dose modifications (75%). At 12 or 24 mos, 77% (307/401) and 68% (126/184) of pts continued on ibrutinib treatment, respectively. For pts who completed the most common CIT regimens (bendamustine + rituximab [BR] and fludarabine + cyclophosphamide + rituximab), 80% and 85%, respectively, received <6 cycles per physician discretion. Only 6% (n=82) of pts were treated with other novel agents as index treatment; venetoclax (single agent or combination) was the most commonly administered other novel agent, primarily used in R/R (n=56) pts vs previously untreated pts (n=1). Treatment for pts with high-risk features was examined for all pts. Of 100 pts with del(17p), 59% received ibrutinib, 28% CIT, 7% IT, and 6% other novel agents. Of 43 pts with TP53 mutation, 67% received ibrutinib, 21% CIT/CT, 5% IT, and 7% other novel agents. The proportion of pts with del(17p) and/or TP53 mutation receiving CIT decreased over time (2016–2018), although sample size was small. Of 121 pts with unmutated IGHV, 49% received ibrutinib, 39% CIT/CT, 7% IT, and 5% other novel agents.

Conclusions: The informCLL registry provides an opportunity to prospectively assess CLL treatment patterns in the era of novel agents. The most common index treatment was ibrutinib and the majority of ibrutinib-treated pts remained on therapy at 2 y follow-up; CIT (primarily BR) was also used for one-third of patients. Prognostic biomarker testing rates were poor, especially for TP53 and IGHV mutational status. Data from informCLL also indicate a ‘knowledge gap’ in terms of prognostic marker testing and selection of therapies for pts with high-risk disease. Data from the now complete pt population and with continued follow up will allow for the ongoing evaluation of real-world treatment decisions and pt care that cannot be addressed by data from randomized clinical trials. 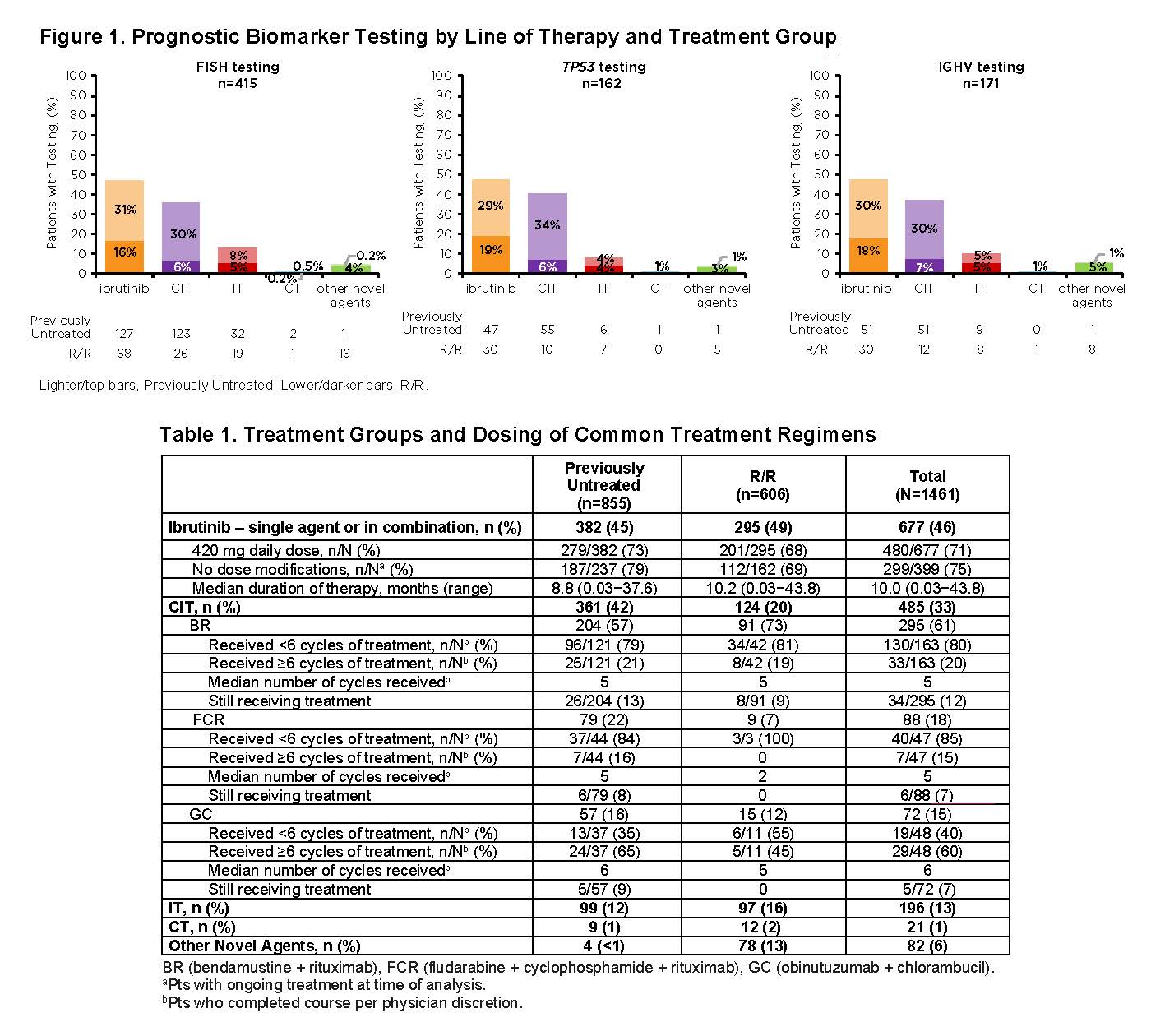