Tim-3 is emerging as a promising target for antitumor immunotherapy. A number of clinical trials are ongoing to evaluate anti-Tim-3 therapies as a single agent or combinations in solid tumors and hematologic malignancies. However, there remains a considerable lack of data related to the information of Tim-3 signaling in diffuse large B-cell lymphoma (DLBCL), especially the genetic characteristics and immune microenvironment. Herein, three genetic mutations of galectin-9, which was a major ligand of Tim-3, were identified in six DLBCL patients (6/188, 3.2%). Among them, four cases harboured the same base substitution c.13G>A, resulting in the exchange of glycine into serine at position 5 of galectin-9 (p.G5S). Furthermore, one case carried the mutation c.905G>A, with galectin-9 residue arginine 302 mutating to histidine (p.R302H). Notably, this mutation was predicted to be deleterious and probably damaging by SIFT (score 0.01) and Polyphen2 (score 0.971) algorithms, suggesting potentially disrupting protein function. Another missense mutation detected was c.716A>G, with galectin-9 residue lysine 239 mutating to argnine (p.K239R). And these mutations had never been reported in DLBCL according to the COSMIC database. We further found that the Tim-3 mRNA level was significantly higher in DLBCL compared to that of normal B cells through the Oncomine database (p=1.90E-4 for probe 1554285_at; p=5.84E-12 for probe 1555628_a_at, p=1.35E-10 for probe 1555629_at, p=2.09E-17 for probe 235458_at). Using multiplexed immunofluorescence staining, we found that patients with Tim-3 expression on tumor-infiltrating lymphocytes (Tim-3+ TILs) experienced significantly poorer outcomes than those with Tim-3- TILs (p = 0.041), and the median survival times were 65.0 months (95% CI: 71.2–88.6) and 79.9 months (95% CI: 54.4–75.6), respectively. Furthermore, we defined a novel subtype of exhausted T cells, named as exhausted Tim-3+ CD8+ T cells, and also found that patients with exhausted Tim-3+CD8+ T cells (median survival, 62.8 months, 95% CI: 50.0–75.6) had a significantly shorter survival than those with non-exhausted Tim-3-CD8+ T cells (median survival, 82.5 months, 95% CI: 72.0–92.9) (p = 0.034). Overall, our findings provided an important addition to the genetic information of Tim-3 ligand in DLBCL. And we uncovered that patients with Tim-3+ TILs and exhausted Tim-3+ CD8+ T cells exhibited inferior survival, supporting potential strategies to block Tim-3 alone or in combination with other immune checkpoints as treatment options for DLBCL patients. 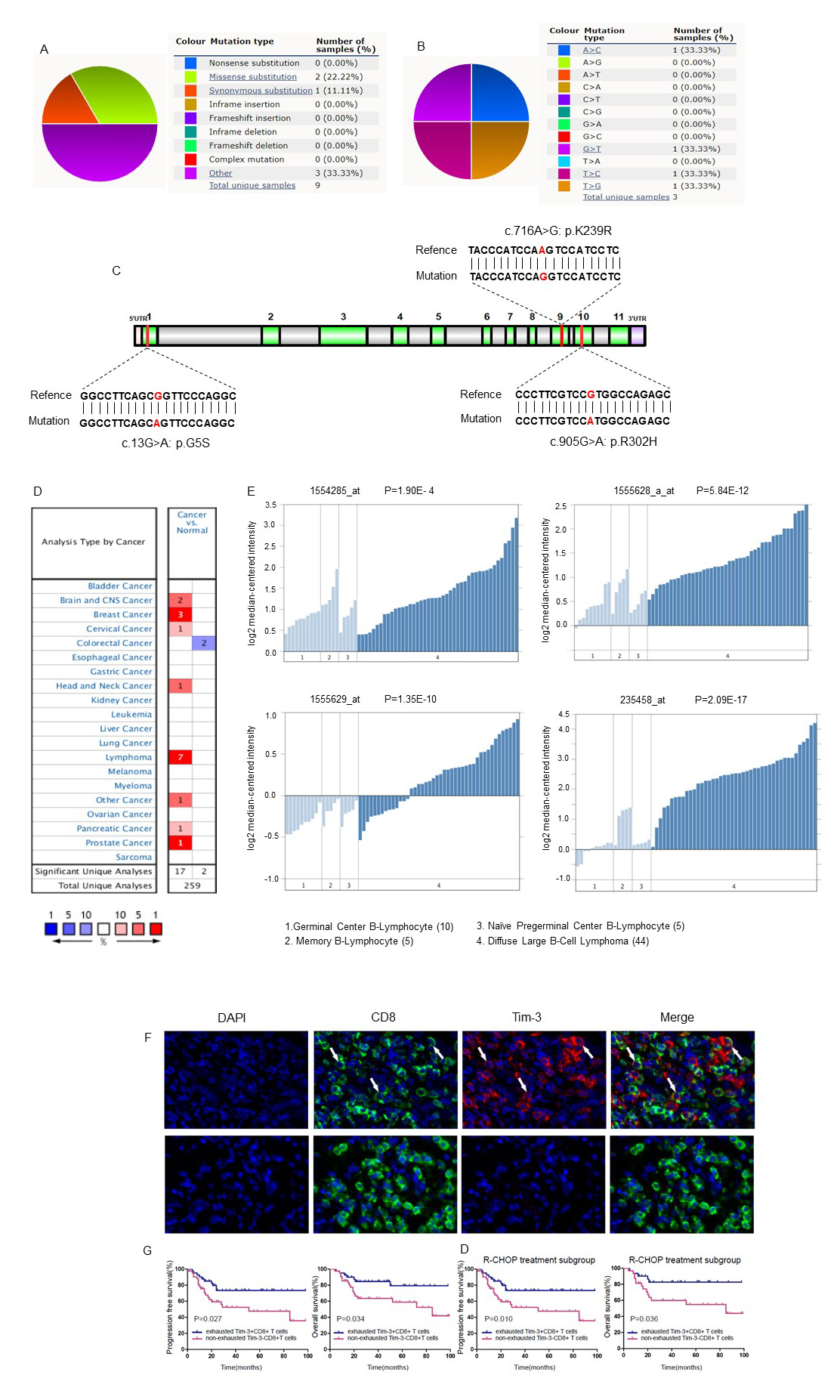