Acute Thrombotic Thrombocytopenic Purpura (TTP) is a life-threatening medical emergency and plasma exchange (PEX) is the only treatment shown to significantly impact acute mortality (Rock et al, N Engl J Med 1991). Diagnosis can be challenging and therein arrangements for PEX must be made, with most centers in the United Kingdom (UK) having to co-ordinate transfer to a tertiary site. To understand issues affecting practice the trainee research network HaemSTAR conducted a retrospective nationwide review of patients presenting to UK hospitals with TTP against British Society of Haematology clinical guidelines (Scully et al, B J Haem 2012). Analysis was conducted on the time from hospital presentation to initiation of treatment and impact on patient outcomes.

Adults ≥18 years presenting to hospital between 1st June 2014 and 1st June 2019 with first episode acute TTP and ADAMTS13 level <10% were identified by local clinicians. Anonymized data of baseline characteristics and treatment times was submitted via an online secure server. Time to PEX was defined as time from receipt of the first full blood count sample in the laboratory to time of plasma release for PEX from blood bank. Where patients were transferred between sites data was linked retrospectively.

On univariate and multivariate analysis age <60 years, hemoglobin (Hb) <100 g/L, presence of fragments, PEX available on-site and admissions occurring after May 2017 were significant predictors for PEX initiation within 8 hrs. PEX within 24 hrs was associated with age <60 years, platelet count <30 x 109/L, Hb <100 g/L and presence of fragments only. The presence of cardiac and/or central nervous system (CNS) involvement was not predictive of time to initiation of PEX (table 1).

96 patients (62%) received steroids within 24 hrs of presentation, 98 of 128 patients with cardiac/CNS involvement (77%) received rituximab within 48 hrs and 12 patients (8%) received platelet transfusion in the absence of major bleeding.

19 patients (12%) died within 30 days of presentation (median time to death 10 days, range 0-23). In 7 of these cases (37%) a delay >24 hrs from presentation to diagnosis was reported despite presence of fragments in 4 cases. Mortality did not correlate with availability of on-site PEX.

This is the first multi-center record of time to treatment from initial presentation of acute TTP. Results comply with guidance for rapid initiation of PEX with 61% patients commencing within 24 hrs of presentation and, from June 2017, 34% of patients initiating PEX within 8 hrs. The recent increase in early PEX initiation correlates with initiatives to improve treatment pathway efficiency following diagnosis of TTP. Early use of steroids and rituximab correlated with earlier use of PEX indicating where timely diagnosis was made there was good compliance with guidelines. Inappropriate use of platelets appeared attributable to misdiagnosis.

Older patients, those with higher platelet counts and Hb and absence of red cell fragments on film report were more likely to experience prolonged time to initiation of PEX. This does not appear related to PEX access, but most likely the difficulty of making TTP diagnosis in this cohort. That 22% of patients initiated PEX over 48 hrs from admission indicates the issue is relatively common and with several deaths occurring in this group we suggest initiatives to increase early diagnosis should be prioritised. 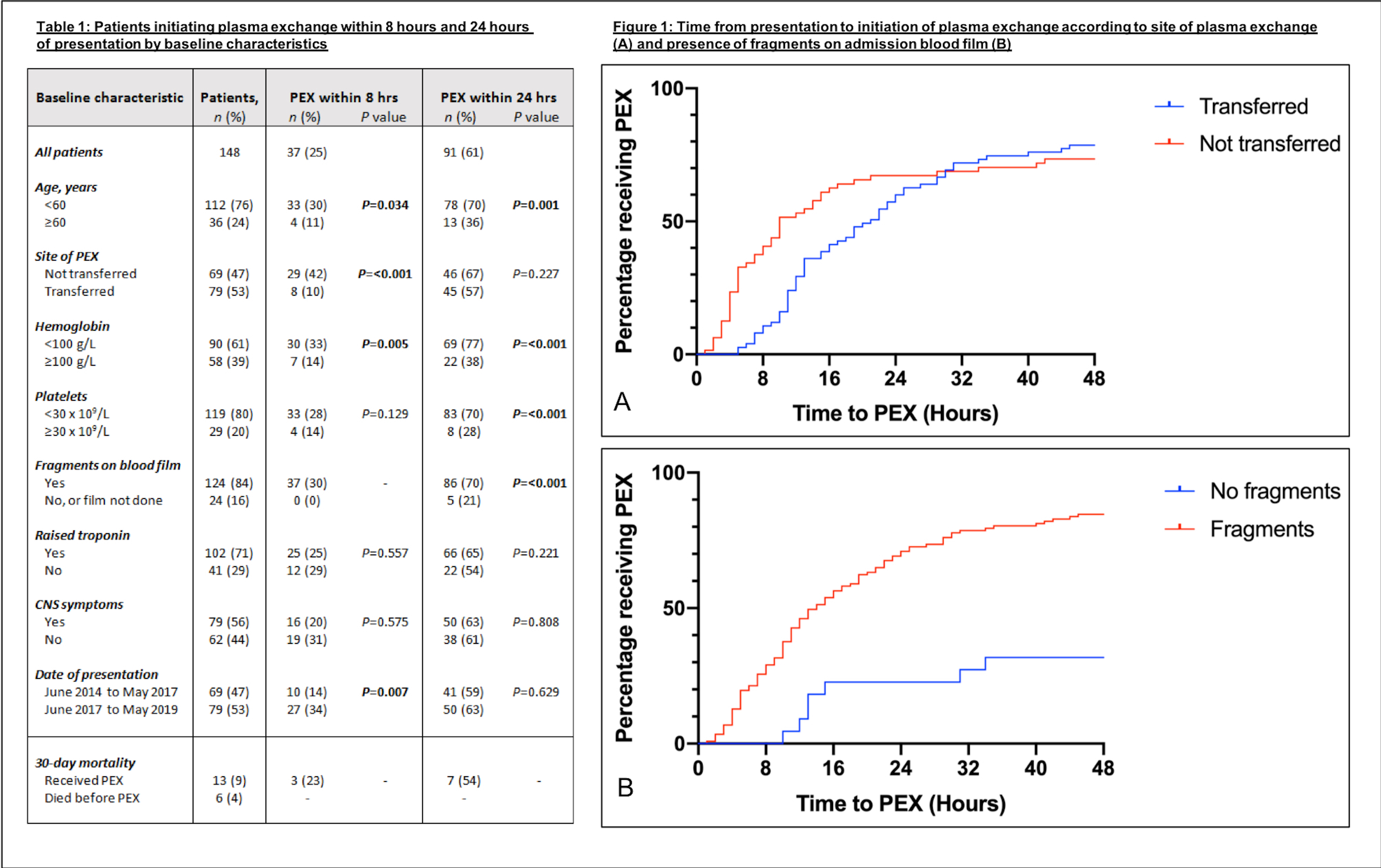