Multiple myeloma (MM) is an incurable malignant plasma cell disease with a median age at diagnosis of 70 years, making it a disease of older patients. Although there has been much progress made in the therapeutics of MM, there is a paucity of data with regards to the symptoms experienced by these patients. Patient reported outcomes (PROS) represent an opportunity to both understand the magnitude as well as the temporal trend of this symptom burden. In 2007, routine prospective collection of patient-reported Edmonton Symptoms Assessment System (ESAS) scores during all outpatient cancer clinic visits was initiated in Ontario, Canada. The ESAS is a validated and reliable tool that assesses the severity of nine common symptoms: well-being, pain, tiredness, anxiety, depression, drowsiness, lack of appetite, nausea and shortness of breath. The study of longitudinal data from an administrative data base provides a unique opportunity to understand the symptom burden experienced by MM patients in the ‘real-world’ at a population level.

We conducted a retrospective population-based study using administrative data from the Institute of Clinical Evaluative Sciences (ICES), which maintains a central database of health records for all patients in the publicly funded health care system for the province of Ontario, Canada. All patients with newly diagnosed multiple identified using the ICD-O-3 code 9732 (Multiple Myeloma), who received treatment, but no transplant in the first year, between the years Jan 2007-Dec 2018, were identified. The main outcome of interest was an ESAS score of ≥4 which has been shown to represent clinically significant moderate to severe symptom burden, within the first 12 months following MM diagnosis. Logistic regression was used to assess the association between baseline factors identified a priori and moderate to severe symptoms for each domain.

A total of 4611 transplant ineligible patients with newly diagnosed myeloma were identified between the years 2007-2018. Of these, 2876 (62.3%) with at least one ESAS score following diagnosis were included in this analysis. This represented 27,701 unique ESAS assessments recorded during the first year, which were used to form the cohort. Baseline characteristics for transplant ineligible patients with one or more ESAS are shown in Table I.

Trajectory for moderate to severe symptoms in each month following diagnosis is shown in Figure 1. A high proportion of the cohort reported moderate to severe symptoms at diagnosis, with tiredness (64%) and impaired well-being (60%) being among the most prevalent and nausea being the least prevalent (13%). Most symptoms decreased over the first year, with the largest decline happening in the first 3 months. One year following diagnosis, there continued to be a substantial burden of symptoms, with over 25% of the cohort reporting at least one or more of the following moderate-severe symptoms: tiredness, pain, impaired well-being, drowsiness or loss of appetite. Self-reported depression rates marginally decreased over time; however, at the end of one year, 18% of cohort still reported moderate to severe depression.

Our results demonstrate that there is considerable symptom burden during the first year following MM diagnosis, with tiredness, impaired well-being and pain being the most common. Although symptoms improve over time, a significant proportion of patients continue to experience moderate to severe symptoms one-year post diagnosis. This study represents the largest population-based cohort study done to date in symptom burden among patients with MM. Future studies aimed at targeted intervention are needed early in the disease course in order to alleviate symptoms burden for at-risk patient groups. 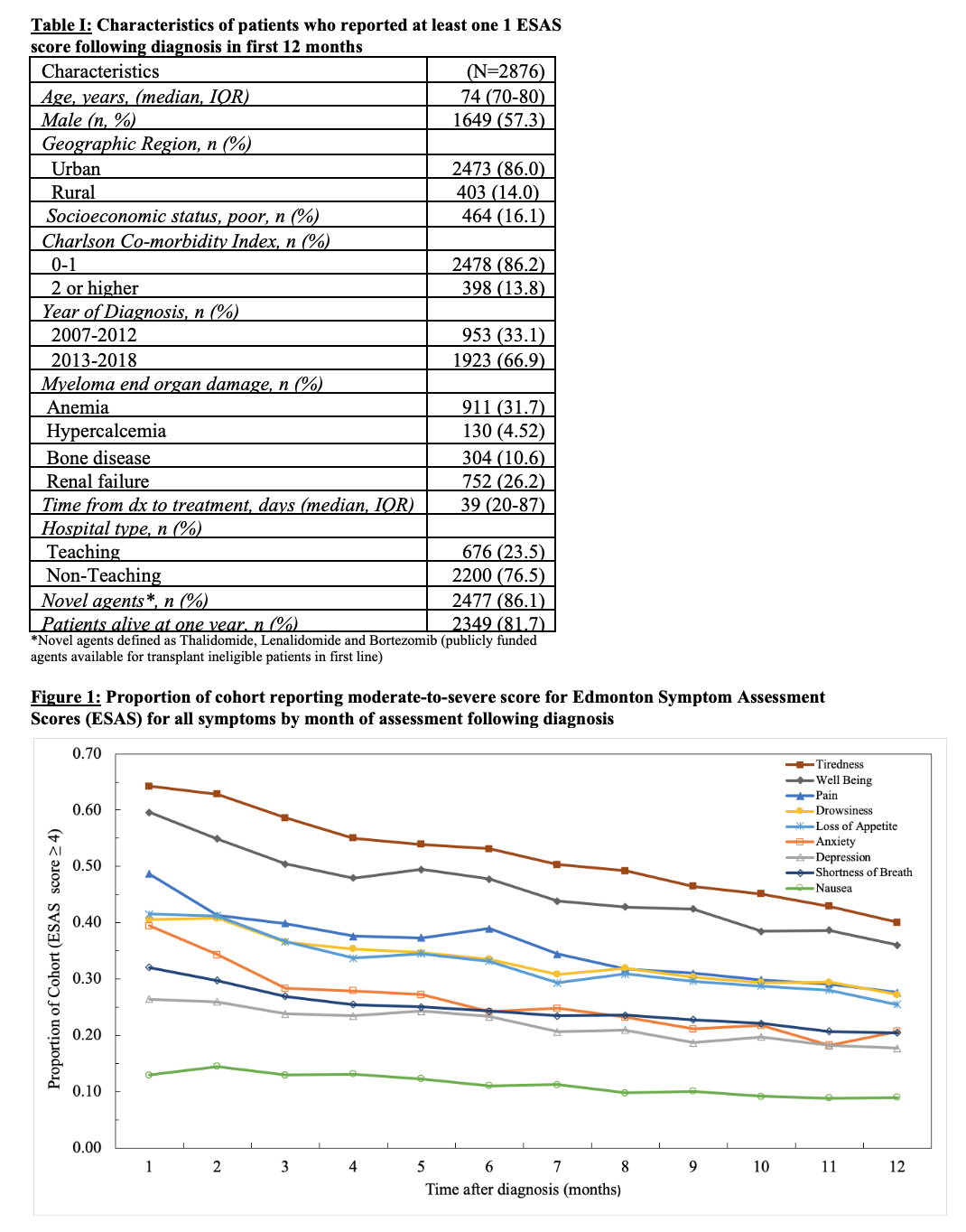