Introduction: In spite of improvements in treatment of mantle cell lymphoma (MCL) over the last 10-15 years, this is still considered an incurable lymphoma entity, and the majority of patients eventually relapse. Ibrutinib is an active agent in R/R MCL, but with a limited duration of response. For patients refractory to this agent, there are few treatment options. Other active agents in R/R MCL are venetoclax, and the combination of lenalidomide and rituximab (R2). In this multi-centre open-label phase Ib-II trial, we evaluated safety and efficacy of this triplet combination in R/R MCL; previously exposed to ibrutinib and ibrutinib naive. Another objective of this trial was to test the feasibility of stopping treatment in patients achieving molecular remission. The objective of the phase Ib portion of the trial was to establish the recommended phase 2 dose (RP2D) of venetoclax and lenalidomide.

Methods: Main eligibility criteria: patients with MCL, relapsing after or refractory to at least one rituximab-containing chemotherapy regimen, WHO PS 0-3, and measurable disease. The primary endpoint was overall response rate (ORR) at 6 months. Minimal residual disease (MRD) monitoring by patient specific RQ-PCR was performed every 3 months during follow-up, according to EuroMRD criteria.

Results: Three patients each in Cohorts A, B and C were enrolled from 31-MAY-2018, at 5 centres in Sweden and Norway. No patient in Cohorts A+B experienced any DLT, but in Cohort C, 2/3 patients had grade 3-4 infection (DLT). A fourth cohort, named Y, was started, intermediate between B and C, without DLT, and the RP2D was established as Venetoclax 600 mg, and Lenalidomide 15 mg. Since then, an additional 8 pts have been recruited in the phase 2 portion (total 21). The median age is 71 years. Patients had received a median of 2 previous regimens (range: 1-7), and 3 had progressed after ibrutinib. Hematological toxicity was the most frequent AE, with 19/20 pts with G3-4 neutropenia, requiring G-CSF support, and 6/20 pts with G3-4 thrombocytopenia. Three events of G3-4 infection were recorded. Single patients each reported G-3-4 rash, renal failure, atrial flutter or melaena. No event of tumor lysis syndrome was reported. With a median follow up time of 5 months, 16 patients were evaluable for efficacy as of June 30, 2020. ORR is 56% with 5 CR and 4 PR. Median duration of response and PFS have not been reached. 4 pts (20%) have stopped treatment in CR and molecular remission, 6 are on treatment, 2 pts have undergone allo-SCT in remission, 1 pt stopped treatment due to toxicity, and 8 have progressed, out which 4 have died. One of two evaluable patients previously treated with ibrutinib responded with a PR. Of the 6 patients evaluable for MRD at 6 months, 6/6 patients have achieved molecular remission in blood and 5/6 in bone marrow.

Conclusions: At a target dose of venetoclax of 600 mg, and lenalidomide 15 mg, this combination is tolerable and shows efficacy in R/R MCL, although associated with a high degree of neutropenia. Interestingly, a response adapted treatment strategy, by stopping treatment in molecular remission, appears to be feasible, although follow-up is still short. 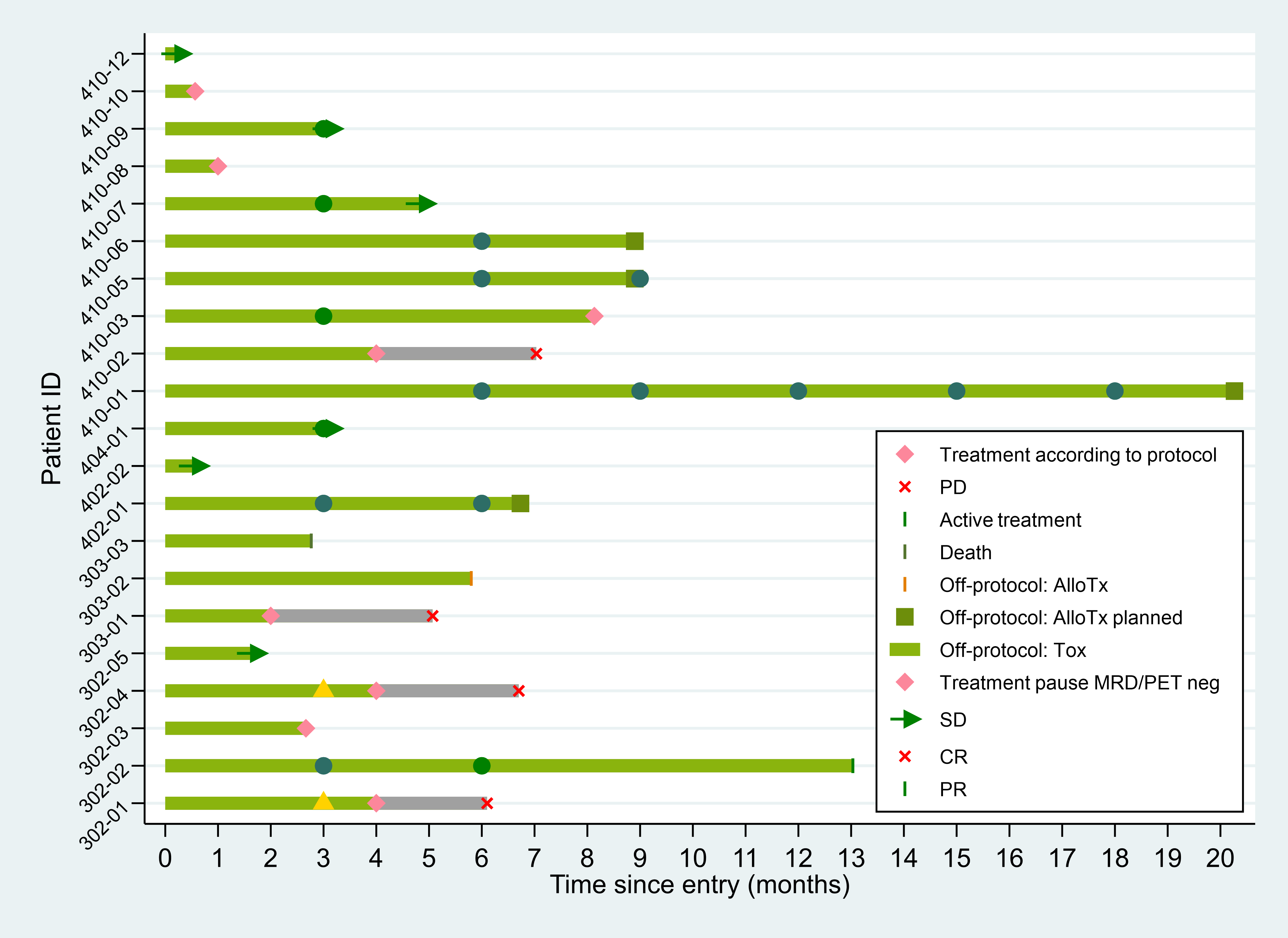