First relapse of B-ALL in children and AYAs is a vexing clinical problem with high rates of subsequent relapse and death using conventional treatment approaches. This is especially true in patients with early relapse [high risk (HR), defined as marrow relapse <36 months from diagnosis or isolated extramedullary relapse <18 months from diagnosis] and those with late relapse and minimal residual disease (MRD) of ≥0.1% at the end of re-induction chemotherapy [intermediate risk (IR)]. Allogeneic hematopoietic stem cell transplant (HSCT) is considered the treatment of choice for this population, but many relapsed patients are not able to proceed to HSCT due to adverse events (AEs) from chemotherapy and/or inability to achieve the MRD-negative second remission known to be associated with optimal HSCT outcomes. The CD3-CD19 BiTE® blinatumomab has single agent efficacy in relapsed/refractory B-ALL (pediatrics and adults) and MRD-positive B-ALL (adults), and a favorable toxicity profile. The primary aim of this study was to compare disease-free survival (DFS) of HR/IR first relapse B-ALL patients aged 1-30 years randomized following re-induction chemotherapy (Block 1 of UKALLR3/mitoxantrone arm) to receive either two intensive chemotherapy blocks (Blocks 2 and 3 of UKALLR3; Control Arm A) or two 4-week blocks of blinatumomab, each followed by one week of rest (Blina cycles 1 and 2; Experimental Arm B). Patients with ≥25% marrow blasts after Block 1 were ineligible for randomization. After randomized therapy, patients on both arms proceeded to HSCT. Secondary aims included comparisons of the following between Arms A and B: AEs, MRD response (by flow cytometry, central lab), overall survival (OS) and ability to proceed to HSCT. During a planned interim analysis (data cut-off 6/30/19) by the Data Safety and Monitoring Committee, the HR/IR randomization was stopped early. While the improvement in DFS for Arm B did not cross the predefined superiority threshold at the time of interim analysis, the combination of improved DFS, superior OS, lower toxicity, and superior MRD clearance for Arm B relative to Arm A was judged to provide sufficiently compelling evidence to establish a new standard of care.

In conclusion, for children and AYA patients with HR/IR first relapse of B-ALL, blinatumomab is superior to standard chemotherapy as post-reinduction consolidation prior to HSCT, resulting in fewer and less severe toxicities, higher rates of MRD response, greater likelihood of proceeding to HSCT and improved disease-free and overall survival. Patients remain in follow up, and prospectively defined analyses of longer-term outcomes will be forthcoming. 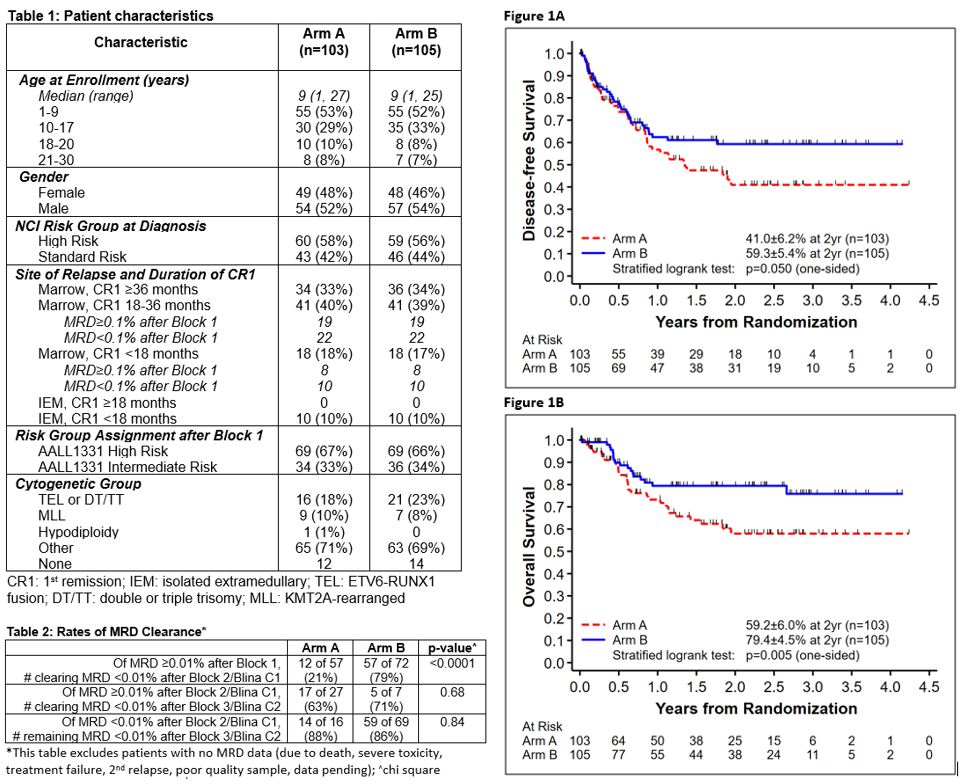 OffLabel Disclosure: Investigational use of blinatumomab