Introduction: More than half of adults with sickle cell disease (SCD) develop chronic pain which is present at baseline and associated with higher levels of opioid use, worse clinical outcomes, and worse quality of life. This pain was previously thought to be nociceptive pain, or pain due to the stimulation of neurons by tissue damage or inflammation. Recent studies have shown that people with SCD can also have neuropathic pain, which is pain due to dysfunctional peripheral or central nerves which either have a reduced threshold for firing (sensitization) or fire spontaneously. We hypothesized that validated patient reported outcome measures could be used to distinguish types of chronic pain in adults with SCD.

Methods: Patients enrolled were adults with any genotype of SCD who receive care in the Adult Sickle Cell Program at Yale New Haven Hospital, were in their usual state of health and denied the presence of any acute pain. These patients also reported that any pain they experienced in the past 7 days was their regular baseline pain. Blood was drawn and patients were asked to complete the Adult Sickle Cell Quality of Life Information System (ASCQ-Me) domains for pain episode frequency and severity, pain impact, social impact, emotional impact, sleep, and stiffness and the Patient Reported Outcomes Measurement Information System (PROMIS) domains for neuropathic pain, nociceptive pain and anxiety. The ASCQ-Me pain episode frequency and severity domains reference the past 12 months, social impact past 30 days, other domains the past 7 days. Significant pain impact was defined as having a score that is worse than the median score of the ASCQ-me reference population of adults with SCD. Neuropathic pain was defined as a score of 55 or higher which has high sensitivity for the presence of neuropathic pain. Health care and opioid utilization data was obtained from the electronic medical record from 1/1/2016 to 12/31/2016. Means and standard deviations for the groups were compared using an analysis of variance test followed by pairwise comparisons for parametric data and medians and quartiles were compared using the Kruskal Wallis test for non-parametric data.

Conclusion: Of patients with SCD who reported worse than average pain impact, 56% had neuropathic pain and 44% did not. This suggests that baseline pain in SCD is heterogenous and may be attributed to different pathologies, some to tissue damage or inflammation, and some to neurodysfunction. Patients with nociceptive pain only had high rates of admissions and ED use and showed a trend of having more inflammation and being more anemic which may suggest higher levels of ongoing hemolysis, though this needs to be studied further. Those with neuropathic pain did not show high ED use and but higher levels of anxiety and worse sleep, possibly suggesting central sensitization. Recognizing different types of pain in SCD may improve pain treatment by allowing for targeted therapy toward distinct pain pathophysiology. 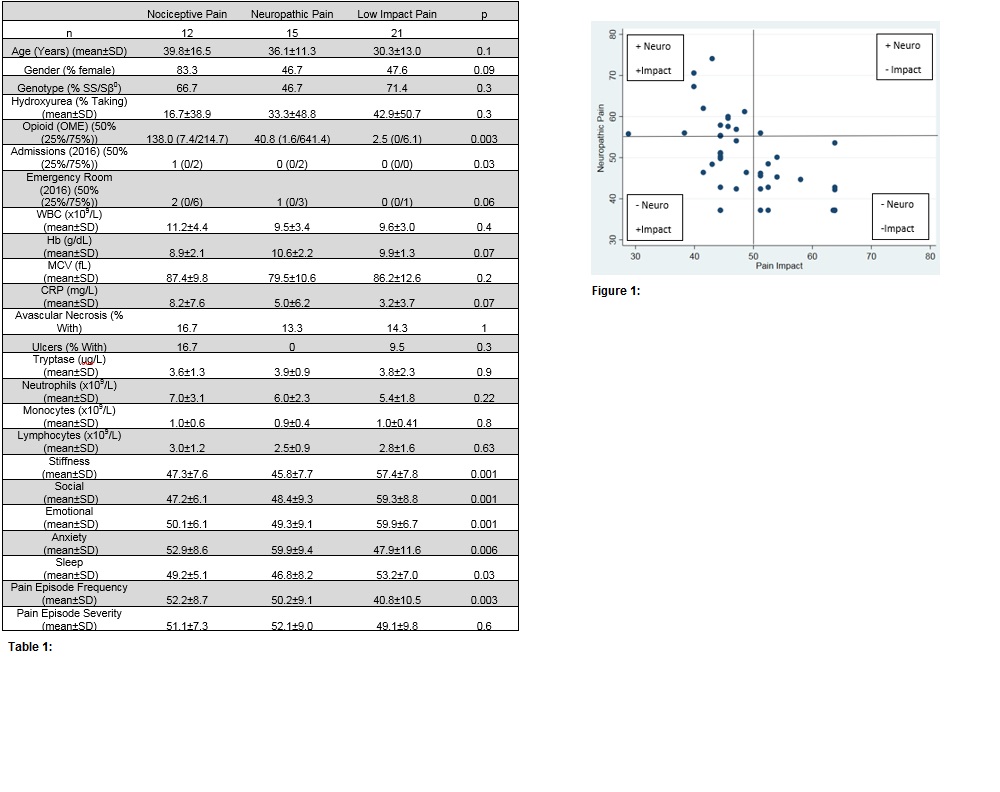