Lentivector mediated gene transfer into hematopoietic stem/progenitor cells and T cells has resulted in long-term stable integration of transgenes and significant clinical benefits in many diseases. We previously reported (De Ravin et al Sci Transl Med. 2016) early outcome data for 5 patients with X-linked severe combined immunodeficiency (X-SCID) enrolled in a first-in-human lentivector gene therapy clinical trial (NCT03315078) as salvage therapy for older children and young adults who had received prior haplo-identical hematopoietic stem cell transplantation (HSCT) as infants without chemotherapy-based conditioning. Lymphocyte-depleted haplo-identical stem cell transplant in X-SCID infants without conditioning generally results in only a T-cell engraftment that may also decline over time which, combined with B- and NK-cell dysfunction, may result in the progression of multi-system clinical problems (bronchiectasis, infections, gastrointestinal malabsorption, failure to grow, immune dysregulation). By 2016 three additional patients were treated and the cohort of 8 patients have now been followed for 3 to 7 years (Cohort A), where we observed gradual clinical benefit in the clearance of chronic norovirus and associated improved abdominal complaints, malabsorption, and growth and IgG production. Four patients were able to cease immunoglobulin replacement therapy.

Here we compared the early outcomes from Cohort B patients who received autologous CD34+ HSPCs processed with the enhanced transduction (ET) procedure. These patients (aged 12 to 36 yo) had significant problems with donor T cell infiltration of liver, bone marrow and kidneys, and near absent B and NK cells. Cryopreserved G-CSF/plerixafor mobilized peripheral blood CD34+ HSPCs (5x106/kg to 28x106/kg) were transduced by the ET process at 5% vector concentration, compared to previous method without transduction enhancers of two daily transductions at 20-30% final vector concentration, representing a 10-12 fold reduction in vector used. Colony forming unit assays showed 78%-92% versus 17%-58% vector-positive clones in Cohort B compared with Cohort A, with VCN of 1.5-12 copies (Cohort B), compared with 0.06 to 0.5 copies in Cohort A. At one month following infusion of gene corrected cell product, we isolated peripheral blood CD14+ myeloid cells as indication of early marrow output from engrafted HSPCs, and observed VCN of 1 to 4 copies (P9-12 and re-treat P8), a ≥10x increase from Cohort A (0.04 to 0.23) at same early time point after infusion (Fig 1). In addition to earlier clinical improvement (abdominal complaints, appetite, growth), there was also an early appearance of B and NK cells (Fig. 2) at much higher levels in Cohort B than previously observed even at years after treatment in Cohort A.

In conclusion, we observed significantly improved measures of early clinical outcomes from lentivector gene therapy of older children and young adults with X-SCID using enhanced transduction procedure with addition of LentiBoost and dmPGE2, that achieves much greater transduction efficiencies with >10 fold less vector, and results in faster immune reconstitution and more significant clinical benefit by 3 months. The patients are monitored closely for potential risks from higher VCNs that may be balanced by reduced selection pressure due to the greater numbers of gene corrected clones. 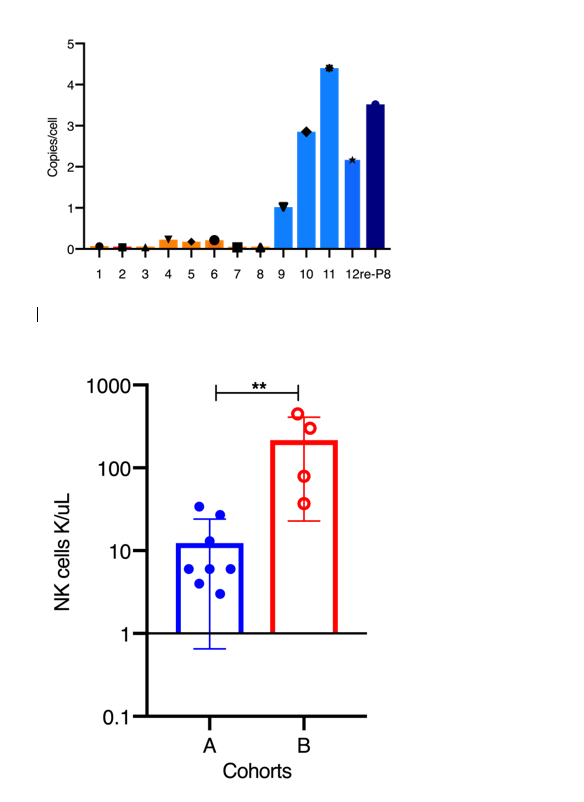