Mantle cell lymphoma (MCL) is an aggressive and incurable subtype of B-cell Non-Hodgkin’s lymphoma (NHL) characterized by genetic dysregulation of CyclinD1. Despite the improvement in response rates with current therapies, MCL patients inevitably relapse and outcomes remain poor. This is particularly true for MCL patients progressing on novel targeted therapies such as ibrutinib, highlighting the continued need for new therapeutic approaches. SUMOylation is a post-translational modification regulated by SUMO Activating Enzymes 1 and 2 (SAE1/2) affecting function, stability, and subcellular localization of a multitude of proteins such as Cyclin D1 and regulating multiple cellular functions such as cell cycle control and DNA damage response. While not yet explored in MCL, it is known that hyper-SUMOylation is associated with augmented cell proliferation and tumor growth of a number of cancers including B-cell NHL.

We evaluated the expression levels of SAE1/2, total SUMO1, and SUMO 2/3 in normal human B cells, primary MCL patient samples, and a panel of 8 MCL cell lines via immunoblotting. We found significantly increased levels of SAE1/2 and total protein SUMOylation in 4 out of 5 MCL patient samples and all MCL cell lines compared to normal human B-cells. To validate the SAE complex as a potential therapeutic target in MCL, we performed genetic knockdown of SAE1 and SAE2 using both shRNA and an inducible CRISPR/Cas9 system and found significant reduction in viability of MCL cells (p < 0.001) thus confirming that SUMOylation is essential for MCL survival. TAK-981 (Takeda Pharmaceuticals) is a potent and selective inhibitor of the SAE1/2 complex currently in a phase 1 clinical trial (NCT036483). We found that treatment of MCL cell lines with TAK-981 resulted in time- and dose-dependent cell death in 7 of 8 MCL cell lines (IC50 17 - 62.5 nM at 72 hr) which was associated with relevant decrease in protein sumoylation. MCL cells were sensitive to TAK regardless of ATM or p53 mutations. Finally, TAK-981 treatment prolonged the survival of SCID mice engrafted with a human MCL cell line (Jeko) compared with placebo control [median overall survival (OS): TAK-981, 34 days; placebo, 29 days, p = 0.008] and also extended the survival of a novel patient derived xenograft (PDX) mouse model of ibrutinib-resistant MCL (median OS: TAK-981, 60 days; placebo, 55 days, p = 0.001), thus establishing the in vivo efficacy of TAK-981 in models of aggressive MCL.

Mechanistically, 24 hours of treatment with TAK-981 resulted in a profound G2M cell cycle arrest in 6 out of 7 TAK-981-sensitive MCL cell lines. Cell synchronization with palbociclib followed by release into TAK-981 showed significant apoptosis upon G2M re-entry. In addition, in p53-deficient MCL cell lines, we found rapid accumulation of polyploid and aneuploid cells followed by rapid cell death following 48 hours of drug exposure. These findings strongly support mitotic catastrophe as a significant mechanism of tumor cell death mediated by TAK-981. Upon fractionation of cells at distinct phases of the cell cycle, we found significantly increased levels of protein SUMOylation by both SUMO1 and SUMO2/3 at the G2M transition. Further mechanistic data will be presented at the meeting.

Given the multiple immune dampening mechanisms of SUMOylation, we are currently studying the anti-MCL immune effects of TAK-981. To do this, we are employing a novel immunocompetent mouse model of MCL in which murine lymphoma cells from Eμ-SOX11/CCND1 double transgenic animals are adoptively transferred into syngeneic mice. These mice develop a systemic lymphoma with morphological, molecular, and phenotypic features characteristic of MCL resulting in death within 3-4 weeks. Preliminary results with this model show that treatment with TAK-981 leads to decrease in lymphoma burden and significant prolongation of survival. Studies into the immune mediated anti-lymphoma effects of TAK-981 using this model are ongoing and will be presented at the meeting.

Together, our data strongly support further development of TAK-981 as a novel MCL therapeutic. 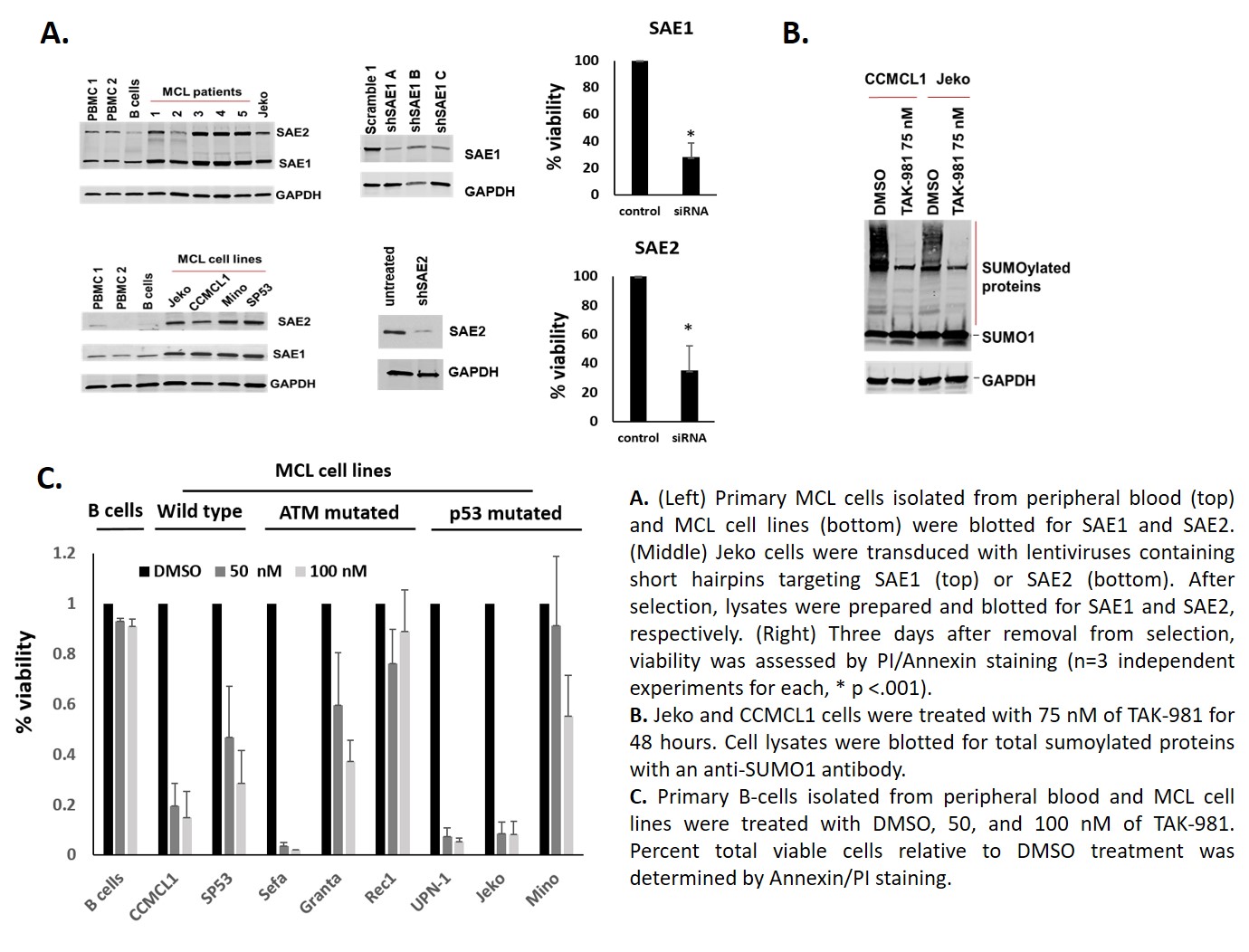