Background: Two-year follow-up from ZUMA-1 trial for axicabtagene ciloleucel (axi-cel) CD19 chimeric antigen receptor T-cell (CART) in aggressive non-Hodgkin lymphoma (NHL) demonstrated that patients (pts) achieving complete remission (CR) as their best response have the longest progression free survival (PFS), while PFS remained poor for others. Majority of the best response are achieved by month 3 post-infusion. Moreover, a subset of pts who do not achieve CR by month 1 may still achieve CR while others will progress within months. Having a clinically available test to predict for durable response can assist clinicians in selecting pts who can be observed for continued response vs. those who may need intervention earlier. Peak CAR-T expansion has been correlated with best clinical response to axi-cel. However there is no clinically available test to quantify CART cells post treatment. Given the prolonged lymphotoxic effect of the lymphodepletion (LD) chemotherapy administered before CART infusion, we hypothesize that the peak expansion of absolute lymphocyte count (ALC, ALCpeak) after infusion likely corresponds to CART expansion. We examined for correlation between ALCpeak and clinical response at month 3 post-infusion for pts who received axi-cel.

Methods: Data was collected from pts who received axi-cel between June 2016 and March 2019 at Mayo Clinic Rochester (NCT02348216, NCT03153462, and standard of care). All infused pts were included in the intention to treat analysis for response and event-free survival (EFS). Lugano 2014 criteria were used for clinical response. EFS was defined as the date of infusion until progression or death due to any cause and evaluated using Kaplan Meier curves with log-rank test. Comparison between subgroups was investigated using Fisher’s exact test and Wilcoxon test for categorical and continuous variables, respectively. Statistical analysis performed using JMP Pro 14.1.

Results: Of the thirty-six NHL pts treated with axi-cel, the median age was 56 yrs (range 26-65); 78% (28) were male; 44% (16) had DLBCL; the median number of prior therapies was 3 (2-6), 47% (17) had stem cell transplant. Nineteen (53%) pts received bridging therapy after leukapheresis. All pts received fludarabine and cyclophosphamide for LD chemotherapy and achieved ALC nadir by the day of CART infusion (median 0.03 x 10^9/L, range 0.01-0.11). As CART expansion were found to peak within the first two weeks in ZUMA-1 trial, we examined ALC trend over 15 days post infusion and found that ALCpeak generally happened within the same timeframe (median ALCpeak day: 9, range 6-15).

At 3 months post infusion, 33.3% (12/36) of pts achieved CR, 8.3% (3/36) pts were in partial remission (PR). No correlation was found between CR response and clinical characteristics: age >60 years, stage III/IV, B symptoms, elevated LDH, IPI score 3-4, number of previous treatments, use of bridging therapy, peak CRP and ferritin. However, the ALCpeak was significantly different between CR and non-CR pts (median, range: 1.09, 0.35-2.55; 0.67, 0.15-1.03; p=0.04). Using receiver operator curve (ROC)-derived area under the curve (AUC) estimates, ALCpeak 1.08 x 10^9/L was identified as the best threshold to discriminate patients at different likelihood to achieve CR at month 3. Pts achieving ALCpeak ≥ 1.08 showed a strong increased likelihood of achieving CR at month 3 (OR 2.8; 95% CI, 1.12-6.99; P=0.02). There was no statistical difference between the ALCpeak high and low groups in terms of use of bridging therapy, occurrence of any grade or higher grade cytokine release syndrome or neurotoxicity, or the use of tocilizumab or steroid. Interestingly, for pts who had changes in clinical response from month 1 to month 3, all 3 pts who converted to CR by month 3 had ALCpeak≥1.08, while the 13 of the 15 pts who had progressed by month 3 had ALCpeak<1.08. In addition, EFS was significantly different between pts who had ALCpeak above and below 1.08 (6 months EFS rate 75% vs. 25%, respectively, Figure 1).

Conclusions: We found that the ALC expansion occurred in the first 15 days post axi-cel infusion, consistent with the known time frame for CART expansion. Higher ALCpeak level in this timeframe correlated with higher likelihood of achieving CR, and is associated with conversion to CR. This study is limited by the small sample size and limited follow-up, but the results are promising for further prospective investigation in a larger cohort of patients. 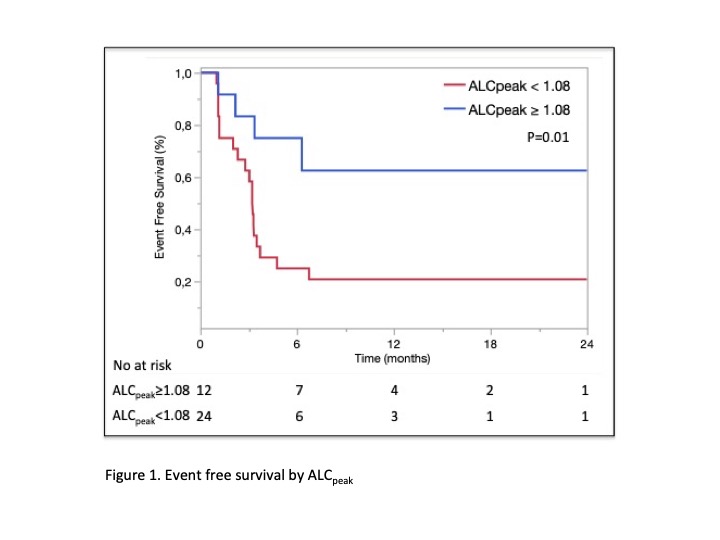