Background: Axi-cel is an autologous anti-CD19 chimeric antigen receptor (CAR) T cell therapy approved for the treatment (Tx) of patients (pts) with relapsed/refractory large B cell lymphoma (R/R LBCL) with ≥ 2 prior systemic therapies. In Cohorts 1+2 (C1+2) of ZUMA-1, the multicenter, single-arm, registrational Phase 1/2 study of axi-cel in pts with refractory LBCL, Grade ≥ 3 cytokine release syndrome (CRS) and neurologic events (NEs) occurred in 11% and 32% of pts, respectively (Locke FL et al, Lancet Oncol 2019). In C1+2, the objective response rate (ORR) was 83%, the complete response (CR) rate was 58%. A non-randomized safety expansion cohort was added (Cohort 4 [C4]) to evaluate the effect of earlier steroid use on the rates of CRS and NEs. Initial results suggested that early use of steroids may help reduce the incidence of severe CRS and NEs without affecting response rates or CAR T cell expansion (Topp MS et al, ASCO 2019). Here we present the primary analysis of ZUMA-1 C4 with a greater number of pts and longer follow-up (F/U).

Methods: Eligible pts were leukapheresed, could receive optional bridging chemotherapy (not allowed in C1+2), and received conditioning chemotherapy (fludarabine and cyclophosphamide) prior to axi-cel infusion at a target dose of 2 × 106 anti-CD19 CAR T cells/kg. Patients in C4 received early steroid intervention starting at Grade 1 NE and at Grade 1 CRS when no improvement was observed after 3 days of supportive care. The primary endpoints were incidence and severity of CRS and NE. Additional endpoints were efficacy outcomes and biomarker analyses, including levels of CAR T cells and inflammatory markers in blood. ORR and CAR T cell levels in C1+2 and 4 were compared across quartiles of tumor burden, the values of which were determined by C1+2.

As expected from the revised AE management, a greater proportion of pts in C4 received steroids and tocilizumab vs C1+2 (73% and 76% vs 27% and 43%). Earlier steroid use appeared to impact the percentage of pts with severe CRS or NE: in C4, fewer pts experienced Grade ≥ 3 CRS (2%) and NE (17%) than was previously observed in C1+2. The ORR in C4 was 73% with a CR rate of 51%. Fifty-four percent of pts remained in ongoing response with ≥ 6 mo F/U, compared to the 44% ongoing response rate at the primary analysis of C1+2 (also ≥ 6 mo F/U). While pts in C4 generally had lower SPD than those in C1+2, the responses were comparable between cohorts when evaluated by tumor burden. Median DOR was 8.9 mo, consistent with that observed at the primary analysis of Cohorts 1+2 (8.1 mo; Locke, AACR 2017; Figure). Median PFS was 11.7 mo, median OS was not reached. CAR T cell expansion was comparable between C1+2 and 4: CAR peak levels of 42 cells/µL blood in C1+2 vs 59 cells/µL in C4, and C1+2 had a median CAR AUC of 462 cells/µL × days vs 512 cells/µL in C4. CAR T cell expansion was also comparable between cohorts when adjusted by tumor burden. Of note, in C4 vs 1+2, there appeared to be lower levels of key biomarkers that are associated with severe NE, including ferritin (pre- and post-Tx), and IL-2 (post-Tx).

Conclusions: Earlier steroid use appears to reduce the rate of CAR T cell Tx-related CRS and NEs in C4 compared with C1+2, without a clinically meaningful impact on efficacy, at a median F/U of 8.7 mo. Conclusions are limited by the non-randomized study design, differences in population sizes and in baseline characteristics between cohorts. Further exploratory analysis will also address the potential confounding effect of bridging therapy. Optimizing AE management is important to improve the benefit-risk profile of CAR T cell therapy. 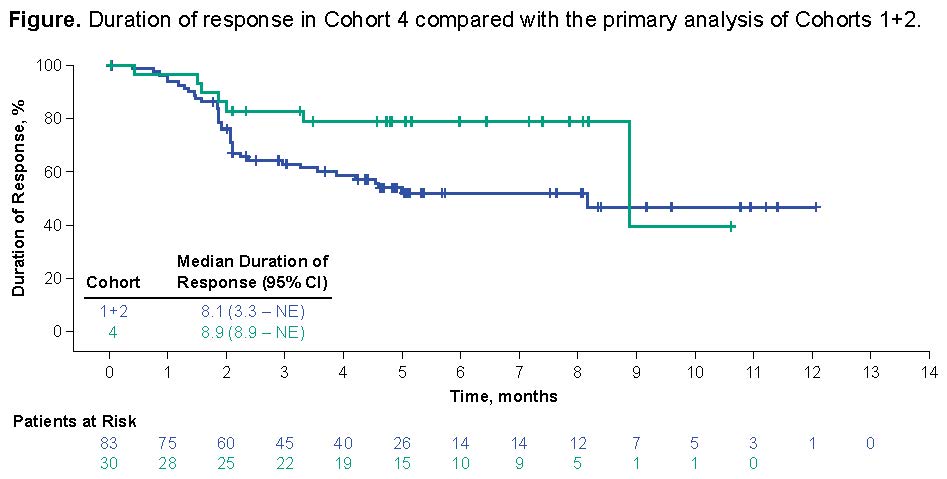