Introduction: Approximately 74,000 Americans are diagnosed with Non-Hodgkin Lymphoma (NHL) each year, approximately one-third of whom have diffuse large B-cell lymphoma (DLBCL). Historically, there have been limited curative treatment options for most patients with DLBCL who relapse or have refractory disease. Recently, autologous anti-CD19 chimeric antigen receptor T-Cell (CAR T) therapies were approved for the treatment of patients with relapsed or refractory large B cell lymphoma with ≥ 2 prior systemic therapies.

Methods: The study utilized a single-group pre-test/post-test design. Data were derived from the Center for Medicare and Medicaid Services (CMS) 100% Medicare Fee-for-Service (FFS) Part A and B claims data. Part D data for the study period were not yet available, so pharmacy claims for oral medications were not evaluated. Patients were included in the study if they had an indicated lymphoma diagnosis and received CAR T therapy between 10/1/2017 and 9/30/2018. The index episode of care was defined as the initial CAR T infusion and associated inpatient stay, if any. To allow for evaluation of patient characteristics and treatments pre- and post-CAR T, patients must have been continuously enrolled in Medicare FFS for 6 months prior to and 100 days after the index date.

Results: 177 patients met all inclusion criteria. Data are summarized in Table 1. The average age was 70 years, 58.8% were male, and 87.6% were white. The vast majority were non-dual-eligible (91.5%) and qualified for Medicare because of age (87.6%) rather than disability. Clinically, 91.5% had a primary diagnosis of DLBCL. Patients had multiple co-morbidities and 74.6% had a Charlson Comorbidity Index score ≥ 3. Fewer than 5% of patients had a previous autologous stem cell transplant. Forty-three percent of patients had one or more comorbidities that would have disqualified them from CAR T clinical trials (e.g. renal failure, heart failure, recent history of DVT/PE.)

Over half of all patients (52%) received intravenous chemotherapy (CTX) in the 6 months prior to CAR T, and 60% received outpatient lymphodepletion.

During the 6-month pre-index period, over half the patients had ≥ 1 hospitalization, and nearly 20% had ≥ 3. Of these, 27.1% were re-admitted during the post-index period. For those hospitalized, the median length of stay (LOS) pre- and post-index was 7 and 5 days, respectively.

None of the patients expired during the post-index period, but a small percentage (<5%) were admitted to hospice care. There was no clear evidence of subsequent CTX use during the 100-day post-index period (which would suggest disease progression) although claims for the period may lag for some patients.

Conclusions: The results of this real-world study indicate that older patients with multiple comorbidities can be treated successfully with CAR T therapy, and that post-index care was associated with lower hospitalization rates, bed days, ED visits, and lower total costs during this period. 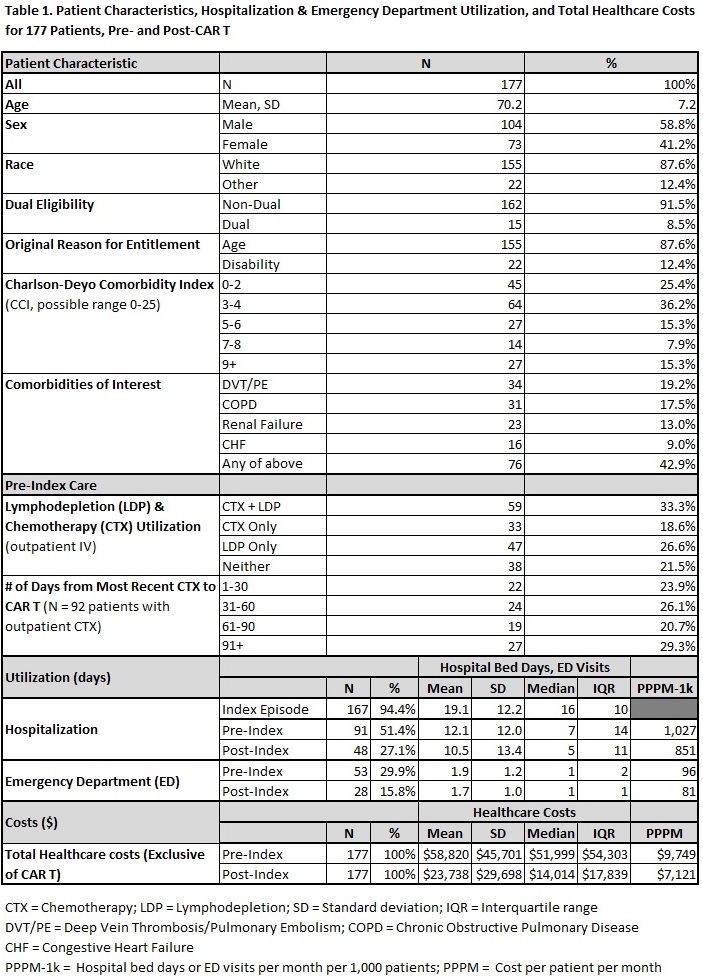